By NewsroomJanuary 26, 2022Conservation
No Comments 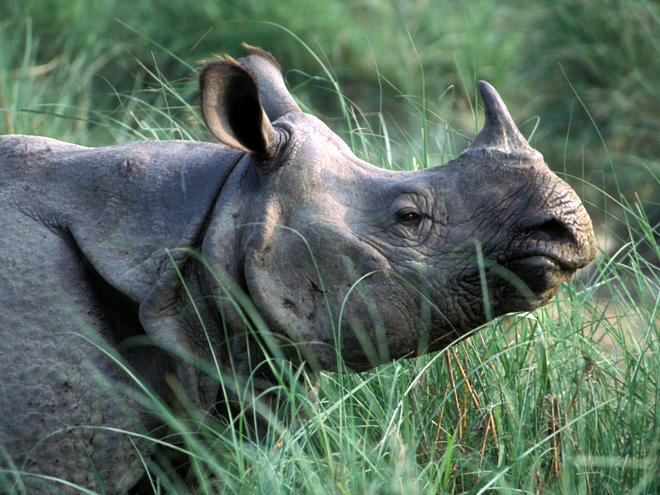 Ganesh Pant worries about the future. While he delights in the stunning conservation accomplishment that has seen the numbers of greater one-horned rhinos in Nepal jump from 100 in 1965 to 752 in 2021, he wants to be sure that success will continue.

Before the 1950s, as many as 1,000 rhinos roamed the grasslands and forests of Nepal. But by 1965, rampant hunting, poaching and changes in land use had brought the species close to extinction in the country. Then, the national park was established in 1973 and thanks to concerted conservation efforts, the rhino population began to bounce back.

Today, Chitwan national park has the second-largest concentration of one-horned rhinos after India’s Kaziranga national park, with the two parks accounting for 70% of the species’ global population. Besides playing a key role in the ecosystem, Chitwan’s rhinos help attract huge numbers of tourists each year, contributing considerably to the country’s economy. In 2019, there were 185,000 foreign visitors to the park.

But the greater one-horned rhino is still classified as vulnerable by the International Union for Conservation of Nature (IUCN), and a new threat has emerged. While there were only about five confirmed deaths due to poaching between 2016 and 2020, more than 100 rhinos were reported to have died of natural or unknown causes. “Poaching used to be the reason for rhino mortality. But in recent years, the government has done an excellent job in protecting rhinoceroses from poaching,” says Pant, a conservation officer working for the Department of National Parks and Wildlife Conservation in Nepal.

“At this point, we cannot say that [these deaths are] only due to the impacts of climate change,” says Pant, who is studying for a PhD with the University of Southern Queensland, Australia. But he believes that the climate crisis could be one of the underlying causes. Pant and a team of researchers developed a set of 21 indicators to assess the vulnerability of the rhinos in Nepal to climate change. They concluded that they were “moderately vulnerable” to the impacts of global warming, primarily due to the likelihood of invasive species and extreme flooding in prime rhino habitat, along with habitat fragmentation, droughts and forest fires.

Rhinos are a highly adaptive species, hence their categorisation as moderately vulnerable. “That means it’s not at risk of immediate extinction due to climate change, but we have to consider it at the moment if we are to sustain the population for the long run,” says Pant.

Wendy Foden, a conservation biologist, agrees: “We are currently experiencing the fastest rate of climatic change in 65m years. If conservation planning efforts are to remain relevant and strategic, they must include the best available science on anticipated future impacts.”

Recent studies have shown several species of animals are already feeling the impact and are responding by shifting their habitats and even growing appendages or larger beaks, legs and ears to better regulate their body temperature in some cases. However, predicting the effects of the climate crisis on biodiversity is a challenge, in part because of the lack of long-term observational data.

“It would be very unwise to plan species conservation actions before thoroughly assessing what can go wrong for that species, the mechanisms of potential impacts, how sensitive it is to these, and whether it is likely to be able to adapt of its own accord,” says Foden, who chairs the IUCN Species Survival Commission’s climate change specialist group, and led the development of IUCN guidelines for assessing species vulnerability to climate change.

Pant’s research looked at the one-horned rhino’s climate crisis vulnerability according to sensitivity, exposure and adaptive capacity. Sensitivity is how strongly a species is likely to be affected by climate change; exposure is the extent to which their physical environment will change; and adaptive capacity is their ability to overcome the negative impacts of climate change.

While the one-horned rhinos fared well in the climate change vulnerability analysis, the changing climate is already threatening the rhino population in Chitwan national park. The species is dependent on a certain level of annual flooding to maintain its habitat.

But over the last few years, extreme flooding has affected the park several times, sweeping rhinos downstream into India and bringing debris and rubbish from upstream. Drought is also occurring more often, leading to fewer of the ponds that rhinos wallow in to regulate their temperature. Invasive species such as the bitter vine (Mikania micrantha), and Chromolaena odorata, a flowering shrub also known as Siam weed, are spreading at an alarming pace, encroaching into the grasslands that are the rhinos’ prime habitat. Global heating is expected to exacerbate extreme flooding and prolonged droughts, as well as the rapid growth of invasive species in the future.

Pant agrees, noting that while floods are only seasonal, maintaining a suitable habitat all year is vital to sustain a healthy population. Another recent study by his team found that more than a third of rhinoceros habitat in Nepal could become unsuitable within 50 years due to mostly to climactic changes, but also land use changes.

Pant has proposed seven adaptation measures to secure the one-horned rhino’s future that include: maintaining the ponds rhinos need for wallowing; managing the impacts of floods; creating “refugia”; and actively managing habitats to provide a mosaic of grasslands and wetlands.

“We are talking about adaptation because mitigation might take a long time and also depends on several factors,” says Pant. “It’s not under our control, so the only thing we can do is safeguard the rhinoceros under these extreme conditions. That’s our priority at the moment.”