Let’s talk rhino conservation: what is notching and why is it important?

By NewsroomFebruary 4, 2022Conservation
No Comments 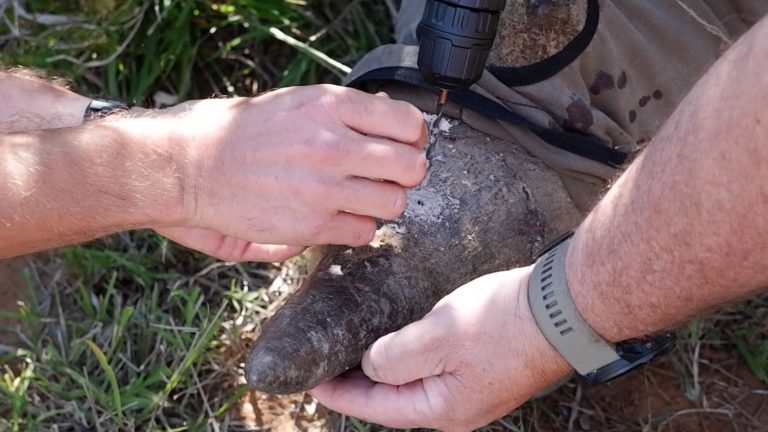 If a carcass or poached horn is discovered, DNA at the scene or from the horn can be matched to the database, which assists in security and provides valuable information about the rhino. Image: As originally published by Getaway

The rhino poaching crisis in Africa is estimated to have started in Zimbabwe around 2009, where difficult socio-economic circumstances and the value of a rhino horn led to rhino poaching to make ends meet.

Rhino poaching expanded to South Africa; the home of the largest rhino population in the world, including the near-threatened white rhino and the critically endangered black rhino.

Predominant poaching activity originates from Kruger National Park, which shares a border with Mozambique. There was an estimated total of 3,529 white rhinos and only 268 black rhinos left in the park in 2021, though figures are most likely much lower.

At present, at least 9,885 African rhinos have lost their lives to poaching in the last decade. But, luckily there are various organisations and individuals who work ceaselessly to combat poaching end ensure the survival of our precious rhinos.

One such organisation, One Land Love It (OLLI) is a conservation and education-oriented non-profit organisation based in South Africa, committed to doing everything possible to protect and ensure the survival of the rhino population.

Part of what One Land Love It does is notching; a procedure in which pieces of skin are excised from the rhino’s ear, as part of a numbering system for identification purposes out in the field.

We spoke to Laura Bolton – OLLI’s project manager – about what exactly this process entails, and she broke it down for us step by step.

To begin, the rhino is immobilised using a dart. Once they are sedated, a blindfold is placed over the eyes, and earplugs are placed in the ear to minimise stimulation, making the procedure easier on the rhino.

The section which is to be excised is strategically selected and clamped off, to slow the blood flow to the area.

After a few minutes, the clamps are removed and a specific notch pattern is cut. After this is complete, potassium permanganate granules are placed on the open wound to assist in clotting.

The ear tissue sample is covered in salt and placed in a special container, after which it will be sent to the biobank. Additional samples include blood draws and horn samples.

Notching assists in providing important information which is used for the identification of rhinos. The pattern of each notched ear sample is recorded for quick visual recognition. The other samples are analysed and interpreted by a DNA specialist, after which it is stored on a national database.

This is vital, as it records familial structures and genders, which are essential for the genetic and reproductive management of rhinos within reserves. It also helps to prevent inbreeding and thereby aids in making a responsible decision regarding the relocation of rhinos and the development of new breeding populations.

Why you should care

Currently, the total estimated rhinos in Kruger National Park is around 4,000. This seems like a lot, but this number becomes increasingly worrying when you consider that more than 1000 rhinos have been killed in game reserves in South Africa in 2015 alone, not to mention recent years.

Experts and conservationists have predicted that Africa’s rhino population is well on its way to extinction within the next 10 years or less if we don’t act fast.

Aside from spreading awareness, the best thing you can do to help the rhino population recover is by donating to organisations committed to their survival.