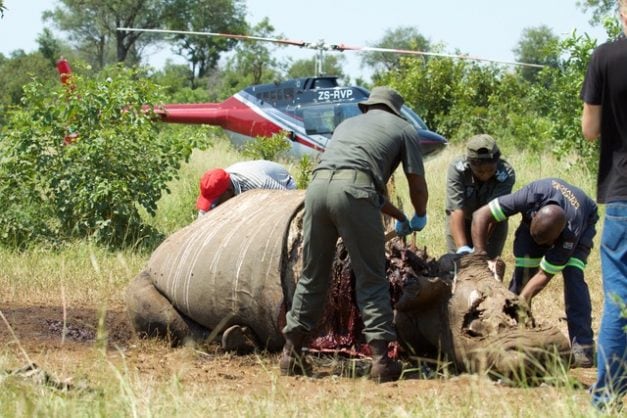 A rhino carcass being investigated. Original photo by Adam Cruise / Conservation Action Trust, as published in The Lowvelder.

The sentence of an alleged rhino poacher recently charged with trespassing and being in possession of a dangerous weapon was a mere slap on the wrist, and he currently walks free.

The man was sentenced to a R10,000 fine or two years’ imprisonment, suspended for five years, in the Bushbuckridge district.

Considering the amount of effort and funds that go into arresting a suspected poacher, and seeing court proceedings through, cases such as this take a significant toll on the people involved in seeking justice.

Not only is this demoralising for rangers involved in intense anti-poaching units, but it also wastes precious resources used to nab poachers. This according to Stop Rhino Poaching founder Elise Serfontein, who said incidents such as this prove why it is so critical to reopen the Skukuza Regional Court, which has a good conviction rate.

“Various technologies, vehicles, ranger training, ranger equipment and force multipliers like tracking dogs all form part of the staggering financial investment by donors and the State to build and maintain strategic on the ground capabilities that protect rhinos from poachers,” she explained. Air support in the form of helicopters is sometimes needed leading up to an arrest.

When an arrest is made, expenses relating to the investigation and court proceedings, which can take months or years to complete, are also incurred. Lawyers hired by poachers often attack every possible technicality they can, and delay cases for as long as possible, Serfontein said.

A poacher could be arrested on a day, and “bump into them at the shops in a few days’ time”, a ranger who wished to remain anonymous told The Citizen.

“It is very demoralising that we cannot rely on the justice system. We work hard, we risk our lives and we do our jobs with pride. We are trying to save the rhino but the courts are failing us. “They don’t understand and they don’t care and nor does our government,” the ranger explained.

Serfontein said there was a staggering amount of effort involved getting poachers to court.

She explained that if the investigating officer and the State prosecutor are both “determined and focused, they make a formidable team with very good sentences.”

“The magistrate can only apply the law, but if the argument is detailed and convincing at least they can go for maximum sentencing.

“So in some courts, with poor sentences, you have to wonder how much effort went in.”

Other elements such as delay tactics by lawyers hired by poachers add to the stress involved in convicting a poacher and ensuring they are kept as far away from nature as possible.

But even when the money runs out and rhino poaching syndicates cease to pay, and the case is handed over to legal aid, more delays are experienced. Anti-poaching rangers and organisations involved work on empty as they await sentences, and end up being disappointed and deflated when underwhelming convictions are handed out.

These are the same people who must continue protecting South Africa’s wildlife, regardless of convictions. This monumental task is not for the faint-hearted and is challenging enough on a good day. “It’s not that it’s happened often, but there have been clear cut cases where poachers have walked, or have been given a slap on the wrist.”