Living with wild animals (Part Two): Eat them like there’s no tomorrow

By NewsroomApril 9, 2020Law & legislation
No Comments

South Africa has embarked on a mission to commercialise and commoditise wild animals. See: Living with Wild Animals part one. It has legalised the sale of rhino horn, failed to close down deeply discredited lion breeding facilities despite a Parliamentary resolution to do so, sanctioned the sale to Asia of lion bones for the production of fake tiger wine, allowed unrestricted fishing of dwindling shark populations and made a strong pitch at the recent CITES conference to open trade of elephant and elephant parts.

Underpinning this are some startling new regulations.

Late last year, 32 wild animals, including lions, giraffes, white and black rhinos, lions and cheetahs, were listed under the Animal Improvement Act, effectively rendering them farm animals subject to manipulation and consumption. They were listed in order “to provide for the breeding, identification and utilisation of genetically superior animals in order to improve the [food] production and performance of animals in the interest of the Republic”. 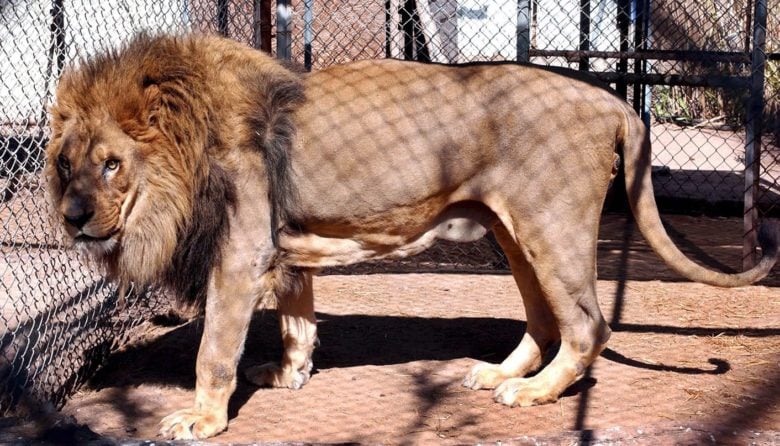 Then in February, 98 more wild animals were proposed to be listed under the Meat Safety Act, including rhinos, hippos, elephants and crocodiles. According to the act, they may be “slaughtered for food for human and animal consumption”.

Given that the Covid-19 outbreak came from the consumption of wild animals, the implications of these moves are deeply worrying, particularly following the news that a tiger in the NY Bronx zoo caught Covid-19 from its keeper and the possibility that it could infect other big cats. Captive-bred lions in South Africa could become a dangerous virus reservoir.

The Animal Protection Index (API), which ranks 50 countries around the world according to their animal welfare policy and legislation, has rated South Africa as “C” overall and “E” with regard to wild animals, alongside Nigeria, China, Pakistan and Argentina. It falls behind Kenya and Tanzania, two other African countries that rely heavily on wildlife tourism. Its report can be downloaded here.

The stated mandate of the Department of Environment is “to give effect to the right of citizens to an environment that is not harmful to their health or well-being and to have the environment protected for present and future generations”.

Wild animals, however, are not citizens. The department’s prevailing mantra and that of the Department of Agriculture, Land Reform and Rural Development  (DALRRD)  is “sustainable use of specimens” with no provision for their welfare. It’s also the song of the wildlife industry.

Welfare is a political hot potato between the departments of Environment and Agriculture. When I asked the Department of Environmental Affairs (DEFF) about animal welfare, they claimed this was the role of the Department of Agriculture. That department referred me to the NSPCA, a small, underfunded non-government organisation with few inspectors. The NSPCA is tasked with implementing the Animal Protection Act on behalf of government, but receives no state funding. Even Lotto funds to the organisation dried up two years ago.

In the parliamentary debate on wildlife regulations, questions about welfare were referred to the draft National Environmental Management Biodiversity Act (NEMBA). This provides for “the use of indigenous biological resources in a manner that is ecologically sustainable, including taking into account the well-being of any faunal biological resource”. According to the National Environmental Management Laws Amendment Bill, the use of “faunal biological resources” must be “ecologically sustainable and take into account their well-being”.

Apart from the shocking description of a living creature in this way, there is no legal definition of what “well-being” might mean, rendering it meaningless as a protection. It is clear, according to many environmental organisations, that terms like faunal biological resources do not reflect the intrinsic value or sentience of wild animals and are in contradiction with their welfare and protection.

The environment minister recently appointed a high-level panel to look into wildlife issues regarding the management, breeding, hunting, trade and handling of elephant, lion, leopard and rhinoceros, but departments are forging ahead before the panel has made any recommendations, effectively side-stepping it. The panel was appointed without public consultation. It’s predominantly composed of people involved in the use and exploitation of wildlife, including hunting, breeding, testing and slaughter.

There has been no requirement for panel members to publicly disclose their personal or organisational interests. Its terms of reference have not been made public and it’s not at all clear what the panel is meant to achieve.

The NGO EMS Foundation drafted a letter to the Minister of Environmental Affairs, Barbara Creecy, challenging the panel’s appointment, and another letter requesting that the TOPS regulations be withheld until there is further public consultation. Such regulations do not require parliamentary oversight but are forwarded to the National Council of Provinces, a body ill-equipped to give oversight on these issues. It’s clear that job creation at any cost and not animal welfare is at the root of government moves.

Recently, Creecy made a public statement on Twitter (later deleted) that: “It is not the animals that we need to worry about, it’s the people. After all, animals have been looking after themselves for hundreds of thousands of years. If we want to address these issues we need to focus our energy on the people.”

Within the overarching “development” framework and under the guise of poverty alleviation, South Africa is spearheading an aggressive “consumptive use” agenda of “if it pays it stays”. We are sacrificing wildness on the altar of use.

This is not new. Historically, the government has always taken a pro-consumptive use stance in relation to wild animals. Under apartheid this was so a few people, mainly white, could benefit and have private hunting grounds, but today this use is part of the language of development. It includes vague phrases like “green economy, wildlife economy, wildlife industry value chain” and “biodiversity economy”.

The legislative dyke against cruelty should be the Animal Protection Act (APA), but it’s out of date and legally hock-tied, being administered by the Department of Agriculture which appears to be operating counter to the act’s directives. Agriculture is therefore unlikely to initiate a case against itself, so the APA is therefore effectively neutralised and few convictions for cruelty have been secured using its constraints.

One of the major failings of the APA is that animals are viewed as objects and property and not as sentient beings with their own rights and needs. The act also limits most instances of cruelty offences with a requirement that the suffering is unnecessary. Without a clear definition of suffering, the protections against commercial uses of animals are rendered so narrow as to be functionally meaningless. Upgraded and given more teeth, it could protect the welfare of wild animals. However, it provides protection to animals only in the limited circumstances in which the criminal burden of proof can be established. It’s entirely “reactive” to specific incidences of harm and offers no prescription for animal welfare, kindness or care.

The direction in which South Africa’s environmental and agricultural departments are moving unfortunately reflects the UN’s questionable dictum of sustainable use but is out of step with our own higher courts and even the National Environmental Management Laws Amendment Bill (NEMLA). The bill, now under discussion and following the Constitution, uses the term “ecological sustainability”, requiring the integrity of whole systems be included in protection and thereby includes individual animals.

In 2016 the Constitutional Court handed down a judgment that elevated the welfare and protection of non-human animals to a constitutional concern. A minority view in that case held that animals are sentient beings capable of suffering and experiencing pain and are worthy of protection.

A later judgment in the North Gauteng High Court considered canned lion hunting to be “abhorrent and repulsive”. It found that even if captive lions are ultimately bred for trophy hunting and for commercial purposes, “their suffering, the conditions under which they are kept… remain a matter of public concern and are inextricably linked to how we instil respect for animals and the environment of which lions in captivity are an integral part of”.

In a Supreme Court case, the bench concluded that the rationale behind protecting animal welfare had shifted from merely safeguarding the moral status of humans to placing intrinsic value on animals as individuals.

This chimes with provisions in the National Environmental Management Act (NEMA) which requires sustainable development to avoid the disturbance of ecosystems and loss of biological diversity. It insists on a risk-averse and cautious approach. How turning 130 wild creatures into farm animals relates to this is hard to imagine.

Why is any of this important? The world is presently witnessing an unprecedented, human-induced collapse of biodiversity and is in the middle of a global pandemic caused by the consumption of wild species often kept in cruel, unsanitary conditions. Laws insisting on animal welfare would prevent this.

An animal welfare approach insists that we regard with compassion individual creatures with which we interact. They each have intrinsic value, which limits the uses that can be made of them. The basic moral premise underlying wild animal welfare is that people ought to:

Understand how human actions affect the welfare of wild animals;

Take reasonable and practicable measures to avoid and minimise harm that human actions will cause to wild animals.

This would make cruelty more difficult, our relationship with animals less brutal, mass slaughter more socially unpalatable and could protect us from the next viral contagion that comes from eating wild animals. Much of the wisdom of the past, says environmental philosopher Thomas Berry, has become inadequate in the present:

Covid-19 has forced the world to reconsider its relationship with wild animals, but South African legislation is increasingly pointing in the wrong direction. It urgently needs a rethink.