Under the golden, late afternoon South African sun, an elephant emerges from around the curve in a dusty path. Disturbed, the imposing animal raises its trunk to sniff out the four-wheeled intruder.

“If he passes along the vehicle, just relax, nothing will happen,” whispers guide Gert Kruger. The pachyderm calmly approaches, feels the body of the car, briefly glances inside, before realising there’s nothing to worry about. 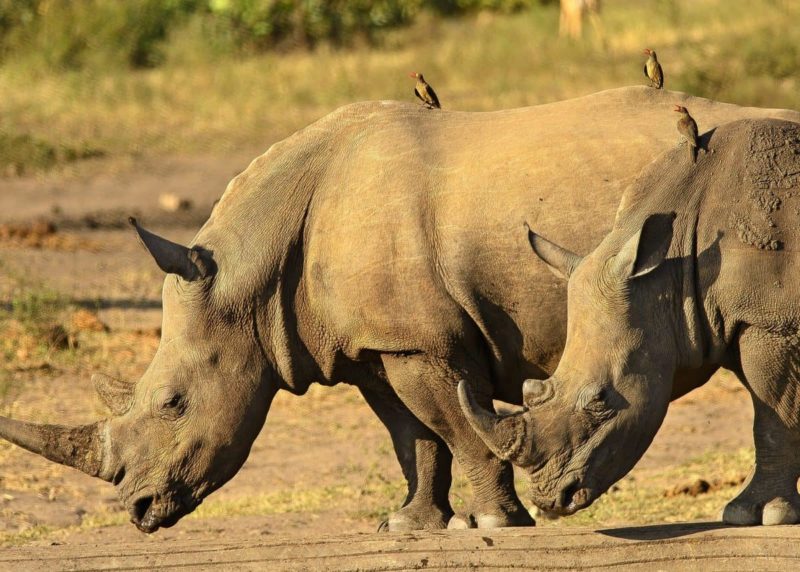 With a slow, disdainful U-turn, it walks back to its snack, majestically showing off its wrinkly, muddied backside.

“By far we are in the best place to be locked down.”

For five weeks, South Africa has been in coronavirus lockdown. For the 17 years that Kruger has taken clients through the thick bushes of Balule private reserve, bordering the famous Kruger Park, he has never grown tired of the charm of such encounters.

Stories of roaring lions and grunting rhinos spill from the pockets of his khaki shorts. And until a few weeks ago, he planned to add a few more, just to burst the seams.

But then the global pandemic torpedoed his plans. No sooner had President Cyril Ramaphosa announced the closure of international borders in mid-March than foreign tourists deserted the camp’s tents, in panic.

The confinement order that followed two weeks later left Kruger distraught, with no one to show around. Clients “had to evacuate in a couple of days,” he said.

“The coronavirus gave us all a big shock… in the tourism business, it’s all our bread and butter,” he said.

His camp was fully booked for the peak summer vacation season by tourists from the northern hemisphere.

Last year, Kruger and his six employees hosted 700 safari enthusiasts. “We had a lot of bookings for the rest of the year,” Kruger said.

But he is now counting his losses ahead of the 2021 season following “a lot of cancellations”.

Within a few days, all the rooms in the wildlife-rich area were empty and souvenir shops had pulled their shutters. The all-terrain vehicles — usually loaded with sunscreen-smeared Europeans or Americans, with cameras slung from their necks — had to be parked away in garages. Only patrol vehicles still crisscross the trails of the 55,000-hectare (136,000-acre) Balule reserve.

The patrols have even been intensified now as animal protection remains an absolute priority despite the lockdown.

“We cannot afford to scale down anything when it comes to security,” said the reserve’s general manager Ian Nowak.

“Our commitment is to be a nature reserve first,” he said.

There’s no question of sending the rangers home — they are confined on the reserve, continuing the war against poachers.

“As far as rhino poaching is concerned, I don’t see any reason for a decrease, I don’t see a change in that threat,” Nowak said. Rhino horn is still “a high-value item, so we just keep the fight as it was before the lockdown.”

And the evidence is there. Police in neighbouring Mpumalanga province on Sunday reported the arrest of three people found in possession of six horns.

The lockdown has produced another threat too.

Beyond the gangs killing to feed an insatiable appetite on the traditional Asian market for rhino horn, the virus confinement has spawned survival poaching. “What I call bushmeat poaching is quite different,” Nowak said.

People “are not working anymore with the lockdown, they are hungry, they hunt for raw food. They don’t care about conservation, they just want to survive.”

State veterinarian Christiaan Steinmann said the trend was on the rise. “There is definitely an increase in poaching, people poaching to survive, they are poaching to eat the meat,” he said. “A lot of the reserves in the area want to cull the animals and give the meat to the communities but there is a problem with the meat safety act… so they don’t do that,” he added.

Threats such as these keep Balule’s dozens of rangers busy. Chief ranger Rian Ahlers and two colleagues board a small helicopter for their daily patrol.

“Basically we are doing everything that we have been doing but more than before the lockdown,” the 39-year-old said, just before take-off.

Nothing is left to chance. In addition to the regular aerial surveillance by helicopter or plane, high electric fences enclosing the reserve are also checked to ensure they haven’t been tampered with. Dozens of special intervention unit rangers are on patrols. From a hilltop, ranger Sam Hlungwani uses binoculars to scan the vast expanse of green forest.

Although he hasn’t seen his family for a month, he’s happy to be here.

“I’m protecting the park… and I’m waiting for all this to be over. I hope it won’t last too long,” he added, “otherwise I’ll end up losing my job. We’ll see.”

A few kilometres away, Juan Geerts is also worried. His 100-bed camp is desolate. He has done and re-done his accounts, but they stubbornly remain in the red.

In one month, he already lost 6.5 million rand (US$358,000), or a quarter of his annual turnover, in cancelled bookings. He shudders at the thought that he may soon have to lay off his 94 employees, most of whom he sent home for the lockdown. “We have been paying the salaries so far but we have taken the decision to shut down all operations until the 30 of June,” sighs the boss of Nyati Lodge.

“But obviously no company can hold up so long to keep all these people employed, the only thing you can do is to retrench,” he added.

Trying to ward off bouts of depression that sometimes grip him in his warthog-invaded lodge, Geerts has begun drafting his staff rosters for July onwards. “Further than July, I don’t think that many businesses will survive,” he warned. He’s got planning in place for when he can start welcoming his first post-coronavirus guests.

Mandatory wearing of masks for everyone, quarantine cabins and fewer passengers per vehicle are just some of the measures.

“Keeping the trust of our guests will be a major part of our recovery efforts,” Geerts said, adding “safety and comfort will be a major factor for months and months… to come.”

“It’s not gonna be a quick fix,” agreed Sharon Haussmann, chairwoman of Balule Game Reserve. “We are looking at a six- to12-months recovery time, even 18 months to get back to the occupancies that we were used to.”

Moreover, there will be a budget shortfall from continued overhead costs, such as levies owed to property owners.

“With the travel ban there is a huge hurdle for us,” Haussmann, 50, said.

“To make up for the deficit will probably be the biggest challenge we have ever faced and one we were not prepared for in any way.”

Under the shade of trees covering his camp from the autumn sun, Kruger is hopeful that the government will not let him down.

Ramaphosa has set aside an unprecedented 200-billion-rand (US$11 billion) relief package for distressed companies, including those in tourism, a key sector which contributes 10 percent of the country’s gross domestic product.

Tourism Minister Mmamoloko Kubayi-Ngubane has promised that “fiscal” and other stimulus packages for the industry, including payment holidays and tax incentives, will be announced “by the end of the week”.

Balule has applied for government relief, “but so far we didn’t get any feedback from them”, Kruger said. “I think in the tourism industry we will be the last…  to resume,” he added. “If things don’t get back to normal within the next three months or so, I have to start… closing some doors.”

But that does not mean Balule shutting or Kruger abandoning his passion of spending time in the vast wild outdoors.

“No! I can’t imagine myself doing something else,” he said, with a smile.