By NewsroomFebruary 6, 2020Conservation
No Comments

Kenya is bracing itself for a humanitarian and conservation catastrophe in the wake of a desert locust invasion on an unprecedented scale. The infestation is already affecting more than a quarter of the entire country and in danger of wreaking havoc nationwide.

While the size of these swarms has not yet swollen to apocalyptic levels, there are fears that numbers could reach plague proportions if the insects are not effectively controlled, with potentially dire consequences not only for community livelihoods but also for some of the continent’s most iconic wildlife.

The swarms now invading Kenya arrived from Somalia and Ethiopia, where they have already caused widespread devastation of crops and grazing land before moving south and then west on the prevailing winds. 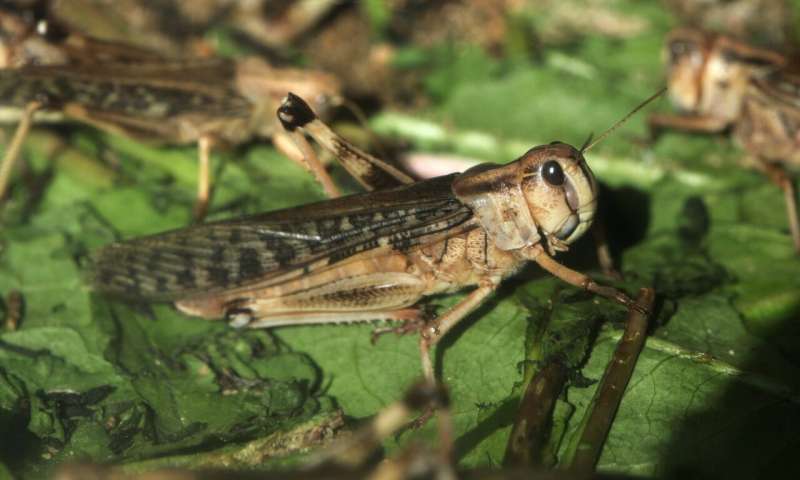 Sera Wildlife Conservancy, a long-standing partner of Fauna & Flora International (FFI), recently found itself directly in the path of these insatiable invertebrates.

This community-run conservancy is a key member of the wider Northern Rangelands Trust consortium that FFI helped to establish in 2004. It harbors a small but crucial population of the critically endangered eastern black rhino, happily augmented when a new calf was born there in late 2019.

The locusts descended on Sera shortly before dusk on January 22nd, and roosted overnight in the trees before flying away around noon the following day, much to the relief of conservancy staff and nearby communities. Rangers who witnessed their arrival described the flying swarms as “moving clouds” and ‘thick, white smoke.” The damage caused during their mercifully brief feeding frenzy has yet to be fully assessed, but the main concern is what might happen if they return.

“We’ve never witnessed anything like this before,” said Reuben Lendira, Sera’s Conservancy Manager. “This is the first invasion since the establishment of the conservancy. Though the locusts have only been in the conservancy for a few hours since their arrival in northern Kenya at the end of last year, we remain concerned as they are present in neighboring areas and there are chances that they will keep visiting us.”

A single desert locust consumes its own body weight in food in a day. Half a million of these insects—a tiny percentage of the average swarm—will devour as much vegetation as ten elephants in just 24 hours. It is easy to see how quickly an entire landscape could be denuded and defoliated, posing a serious threat to the survival of large herbivores throughout Kenya, included those at Sera. In addition to serving as a vital rhino sanctuary, the conservancy also provides protection for other threatened wildlife, including African elephant, lesser kudu and reticulated giraffe.

Locust outbreaks are a natural phenomenon—triggered by abundant rainfall and the plentiful vegetation that results—but there seems little doubt that a prolonged spell of extreme weather has played a role in this instance. Unseasonal torrential downpours in the Arabian Peninsula precipitated by a series of cyclones (a symptom of our changing climate) were followed by further extended bouts of heavy rain, creating ideal conditions for successive generations of locusts to breed within a very short timeframe.

The sheer scale of the infestation in Kenya is difficult to comprehend from the ground, but one swarm alone was estimated by the UN’s Food and Agriculture Organization (FAO) to cover 2,400 square kilometers—an area almost the size of Paris.

But even swarms of this size are just the tip of the antenna compared to what could be in store. It is conceivable that locust numbers, if unchecked, could increase 500-fold within six months, with cataclysmic consequences for crops, pasture, people and wildlife.

To date, localized aerial spraying—using chemicals that are purportedly safe for other wildlife and humans—has failed to contain the invasion. As a result, people on the ground are taking things into their own hands, using more harmful pesticides that could have a serious environmental impact.

Despite reassurances, concerns remain about the possible health implications for wildlife—and humans—when they feed on sprayed vegetation, or drink from water sources contaminated by pesticides. The invasion has not yet spread to Kenya’s food-producing regions, but pastoralist communities including those in and around Sera are understandably nervous about losing the grazing land on which their livestock depend.

It is hoped that control measures will be escalated nationwide in the coming days and weeks, before the swarms multiply to the point where they are unmanageable. In the meantime, Sera remains on red alert.