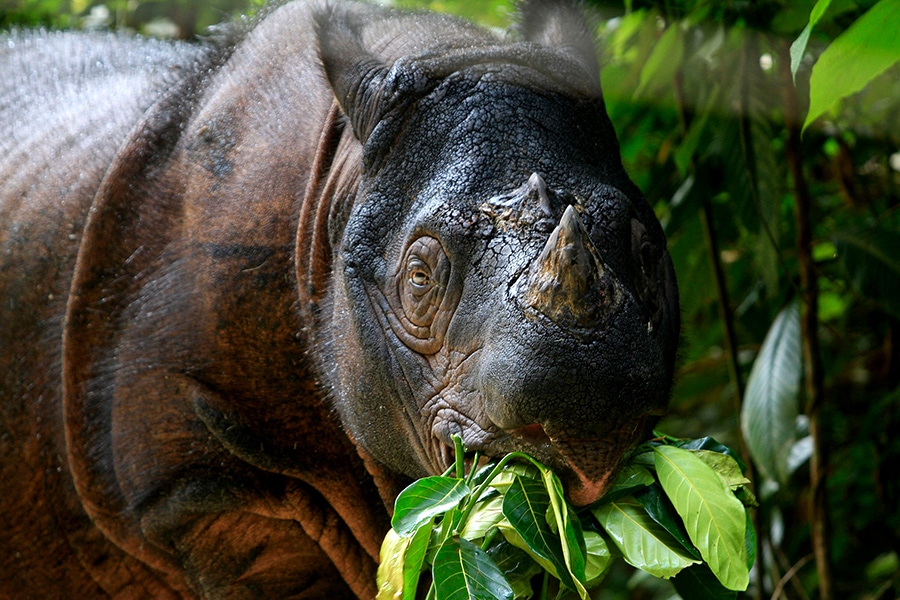 On the Indonesian islands of Sumatra and Borneo, fewer than 80 Sumatran rhinos are all that’s left of this critically endangered species. Tremendous conservation efforts are striving to keep these charismatic mammals from being lost forever. But as the species teeters on the brink of extinction, new research suggests their absence throughout much of their former range has left a troubling vacancy in their role as seed-dispersing eco-engineers.

Drawing on empirical research, published literature and Indigenous knowledge, a study in Biotropica reports that Sumatran rhinos (Dicerorhinus sumatrensis) once dispersed the seeds of 79 plant species. Some of these plants are still spread by Sumatran elephants (Elephas maximus sumatranus), the only other remaining megafaunal disperser in the region. Evidence suggests, however, that neither elephants nor smaller animals can fully replace the Sumatran rhino as a seed disperser — and the consequences of this loss are unfolding in real time.

The Sumatran rhino’s decline is relatively recent, says study lead author Kim McConkey, from the school of environmental sciences at the University of Nottingham Malaysia. A hundred years ago, these massive animals roamed much of Southeast Asia in temperate and tropical forests and grasslands. Since then, however, habitat loss and unrelenting poaching pressure have devastated this slow-reproducing mammal’s populations.

For Rudi Putra, a conservationist in the Leuser Ecosystem in northern Sumatra, declining rhino numbers have visibly impacted the forest during his 22 years working with Sumatran rhinos. “In places where there are no rhinos we see very dense forests, difficult to pass and dominated by … thorns. I think the typical rhino as a browser really helps to make the forest healthier, by influencing the species composition on the forest floor.”

In tropical forests, seed dispersal, the process by which a plant’s offspring moves away from its parent, is often facilitated by animals. The tropical forests of archipelagic Southeast Asia are no exception. The plants of this region evolved alongside Sumatran rhinos and other megafauna; their large fleshy fruits entice the animals, which in turn spread the seeds to new locations through their droppings.

Megafauna can swallow large fruits whole, carrying seeds in their guts for miles before depositing them intact in a nutrient-rich dung pile. When disperser extinction disrupts this plant-animal partnership, a tree’s offspring can become stranded and must compete with their parent and siblings to survive.

“I suspect … that rhinos are much more important for the plants they disperse, than the fruits of these plants are for rhinos,” says study co-author Ahimsa Campos-Arceiz, a researcher with the Chinese Academy of Sciences’ Southeast Asia Biodiversity Research Institute.

The fruits the rhinos ate

Because opportunities to study Sumatran rhinos in the wild are scarce, McConkey and colleagues turned to local Indigenous ecological knowledge to get a clearer picture of rhinos’ diets and seed-dispersal potential.

“The [Indigenous] knowledge of the forest is just incredible,” McConkey says. And, like the Sumatran rhino, it’s at risk of being lost forever.

The Indigenous people of the Belum rainforest in Peninsular Malaysia lived alongside the Sumatran rhino until it disappeared from the region in the early 2000s. To gather their insight, study co-author Lisa Ong, also from the University of Nottingham Malaysia, designed a survey that showed participants forest fruits and asked which animals eat them. This survey, combined with conventional approaches — a field study and review of published literature — gave the research team a list of 79 purported rhino-dispersed species.

Next, they wanted to know whether the rhino’s role in dispersing these species is irreplaceable, or whether elephants and smaller animals are filling in where rhinos have gone missing. Nearly everything we know today about megafaunal dispersal in Southeast Asia focuses on the Sumatran elephant — a species currently faring better than rhinos but facing similar threats to its long-term survival.

Of the 79 rhino-dispersed species, elephants disperse only two-thirds. “For me, that’s the take-home message,” McConkey tells Mongabay. “[Rhinos] are doing something different from the elephant, so we have lost a role even though there might still be elephants there.”

Small animals can also move large seeds. However, McConkey says they’re “not right for the fruit.” During peak fruiting season, small rodents and birds are “completely swamped with fruit and they just can’t manage it. So clearly this fruit is evolved for something much larger.”

The future of the Sumatran rhinos is uncertain. Regardless, evidence gathered by McConkey and colleagues points to Sumatran rhinos as unwitting and irreplaceable ecological engineers that shape forests simply by existing.

“We’re still in the beginning stages of understanding just what effect [rhino loss] would have on the forest and its diversity,” McConkey says.