By NewsroomSeptember 3, 2021Science and technology
No Comments 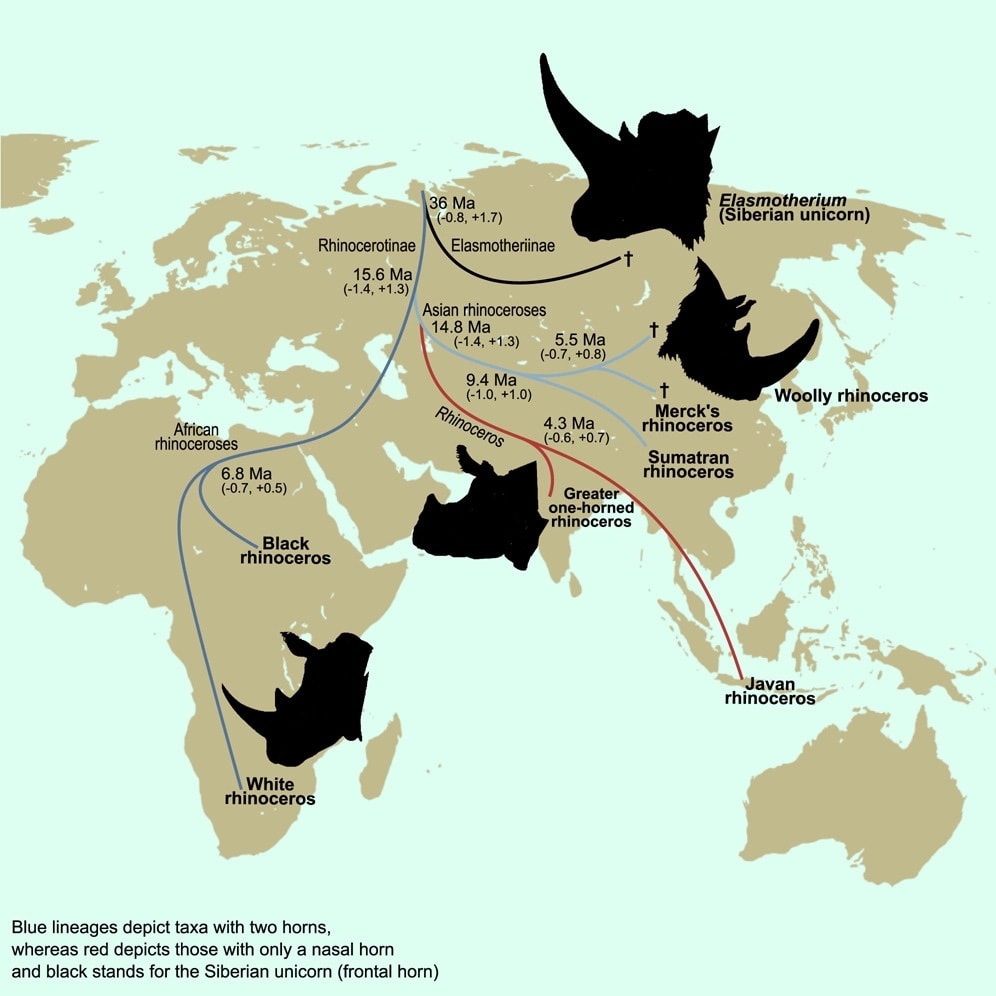 The rhino family tree as reconstructed in the study, showing the branching rhino lineage that supports the ‘geographic hypothesis’ that the two extant African species diverged from the Eurasian species 16 million years ago. Image: Creative Commons.

Scientists have debated the evolution of the world’s five living rhinoceros species ever since Charles Darwin addressed the question in a treatise in the mid-1800s, predating On the Origin of Species.

Three main schools of thought prevail. The “horn hypothesis” suggests that rhinos with two horns evolved separately from those with only one horn; this groups Sumatran rhinos (Dicerorhinus sumatrensis) with the two African species, the black rhino (Diceros bicornis) and the white rhino (Ceratotherium simum), all of which have two horns.

The “geographical hypothesis” sets the two African species apart from the three Asian species: the Sumatran rhino, the Javan rhino (Rhinoceros sondaicus), and the greater one-horned rhino (R. unicornis) that lives in India and Nepal. A third proposal is that the uniquely small and hairy Sumatran rhino, the only Asian species with two horns, is in an entirely separate group from the other four species.

Now, an international team of scientists has shed light on the mystery. By analyzing the genomes of the five living rhino species and three that went extinct during the last Ice Age, they found strong evidence that the rhino tree of life branches according to geographic region, not by number of horns. The two African species diverged from the three Asian species roughly 16 million years ago, according to the findings recently published in Cell.

All five living rhino species have suffered significant population declines due to decades of habitat loss and poaching. Many populations are now small and isolated with low genetic diversity, raising fears among conservationists that the remaining rhinos could suffer inbreeding problems.

However, the new findings also show that all rhinos, including extinct species, have historically had low levels of genetic diversity, which could indicate that this is their long-term natural state. This could mean that the low genetic diversity among living rhinos might only be partially due to recent human-driven population declines, says the study.

“To some extent, this means that the low genetic diversity we see in present-day rhinos, which are all endangered, is partly a consequence of their biology,” study co-author Love Dalén of the Centre for Palaeogenetics and the Swedish Museum of Natural History said in a statement.

The researchers explain that the long-term low genetic diversity could be, at least in part, due to rhino life history traits. Rhinos typically live solitary lives and exist at low population densities, only occasionally coming together into herds, or “crashes,” of mother-offspring animals. Neither do they disperse across large distances. Both of these factors limit their capacity for gene flow.

The results highlight that each species represents a highly divergent branch in the family tree, Dalén told Mongabay. “This means that the extinction of just one, for example the Sumatran rhino, would not only mean the loss of a species, but also of a unique branch on the tree of life that extends back many millions of years into the past.”

Not all good news

While the news that low genetic diversity is part of the rhino’s long-term history is positive for conservationists working to safeguard the long-term viability of rhinos, the new study also found that genetic diversity was lowest and inbreeding levels highest among present-day rhinos compared to the ancient rhino species.

“This suggests that recent population declines caused by hunting and habitat destruction have had an impact on the genomes,” Dalén said. “This is not good, since low genetic diversity and high inbreeding may increase the risk of extinction in the present-day species.”

Nonetheless, there are signs that rhinos have adapted well to low genetic diversity and small populations.

The study revealed comparatively fewer harmful mutations in living rhino species. According to Dalén, this could be due to recent inbreeding removing any deleterious gene variants through natural selection, leaving the surviving rhinos less vulnerable to genetic disease.

“Nonetheless, extant rhinoceroses undoubtedly face enormous challenges in the future, principally due to anthropogenic and environmental effects. A major priority for rhinoceros conservation will be to halt illegal poaching and ensure that there is sufficient carrying capacity for population recovery,” the study says.

In recent years, rhino conservationists have implemented captive-breeding and translocation programs to increase numbers and enhance the genetic diversity of several species. However, such conservation efforts are far from simple.

For instance, in Indonesia there are fewer than 80 Sumatran rhinos left, surviving in small forest pockets across Sumatra and Indonesian Borneo. Conservationists face a dilemma over whether to stave off the effects of inbreeding by mixing the Bornean and Sumatran populations, or to focus on increasing numbers through captive breeding. While mixing populations that have adapted to completely separate environments carries genetic risks, experts say that it might in any case be impossible because of differences in morphology and behavior between the two populations.

According to co-author Michael Westbury of the University of Copenhagen, the results of the new study indicate that conservation priorities should focus on expanding population sizes rather than increasing genetic diversity.

“Now we know that the low diversity we see in contemporary individuals may not be indicative of an inability to recover, but instead a natural state of rhinoceros,” Westbury said in a statement. “We can better guide recovery programs to focus on increasing population size rather than individual genetic diversity.”

At the same time, many of the living rhino species, such as Sumatran and Javan rhinos are teetering so close to extinction that conservationists might simply have to use every tool available to them, said Dalén. “Maybe there needs to be a multi-pronged approach, to limit habitat destruction, stop poaching, help rhinos find suitable mates, and to maintain or increase genetic diversity.”