By NewsroomMarch 30, 2020Anti-poaching, Conservation
No Comments

His broken-hearted colleagues, friends and family mourned his death during a memorial service in the city on Tuesday. National key players in the war on crime vowed that his murder would not go unavenged.

Bruwer was shot on his way to work a week prior. His colleagues, as well as members of national and provincial government agreed that his killers must have been the subjects of one of his investigations. “However, none were named. Deputy police minister, Cassel Charlie Mathale, described those responsible for his death as “the trigger men and the ones who organised his death”.

He warned, “We will leave no stone unturned until we find them and they will be brought to book.”

National Hawks head, Dr Seswantsho Godfrey Lebeya, promised, “Although we are wounded, we will not rest until we have found those responsible for his death. 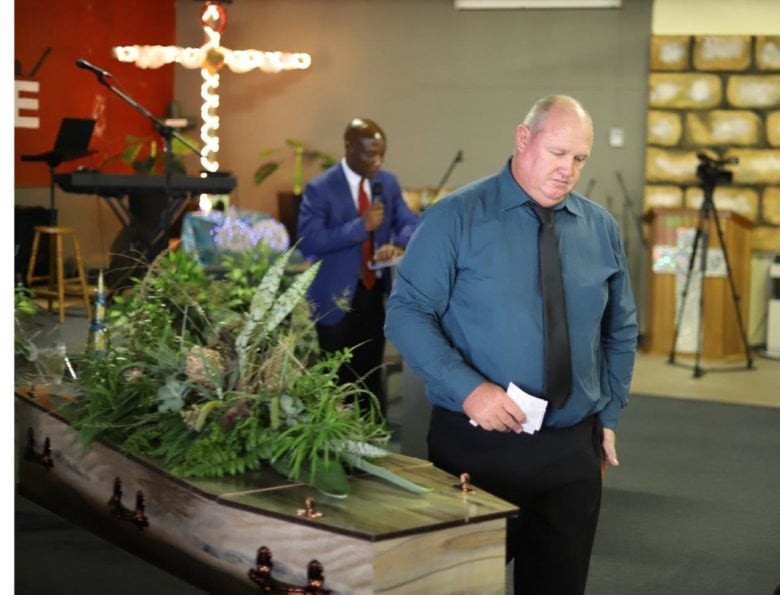 Original image as posted by the Lowvelder

“Lebeya listed highlights from Bruwer’s career with the South African police: “Since joining the police in 1990, Bruwer executed his mandate – to serve and protect – tirelessly and fearlessly,” he said.

He was promoted to the rank of police captain in 2009. In 2013, he moved from the SAPS to the Hawks, where he specialised in serious organised crimes such as poaching and cash-in-transit heists. In 2016, he was awarded the elite unit’s detective of the year award. During his career, Bruwer arrested various high-profile criminals.

Lowvelder regularly reported on his testimony against robbers and rhino poachers.

At the time of his death, he was due to testify against alleged poaching kingpins such as the notorious Petrus Sydney “Mshengu” Mabuza and Joseph “Big Joe” Nyalunga.

“He was a fearless legend,” recalled Pr Sean Bushby.

Regarding the suspects Bruwer would chase relentlessly, who are generally described as fear-inspiring, Bushby stated, “They feared him, because he wanted to do what was right.” He did this one day at a time, motivated by Matthew 6:25-34.

“He knew to trust God every day and to put His kingdom first.” This was echoed by Bruwer’s colleague and close friend, Col Johan Jooste.

“Lt Col Leroy Bruwer was the real thing. His values were to protect and serve without compromise.” He did this, in the words of Mathale, “with no expectation of proportional reward”.

Bruwer’s integrity, loyalty and devotion to God, his country, community, friends and family were honoured by every speaker who remembered him. This included representatives of the South African Police Union.

The MEC for safety, security and liaison, Cynthia Gabisile Shabalala, gave a warning to his killers: “They killed him purposely. Whatever they are trying to silence, will rise strongly.”

She urged anyone with information on Bruwer’s assassination to contact the police.