By NewsroomOctober 17, 2019Conservation, Science and technology
No Comments

JAKARTA: A recent effort by scientists to produce a Sumatran rhino embryo using egg and sperm samples taken from the last of the species in Malaysia has failed, according to officials.

Those involved in the attempt had previously cautioned that there was a low chance of success, given the poor quality of the genetic samples they had to work with.

The egg cell was extracted on Sept. 30 from Iman, the last known Sumatran rhino (Dicerorhinus sumatrensis) in Malaysia. The scientists then injected the egg with sperm from Malaysia’s last male rhino, Tam, who died this past May. His semen had been collected in 2015 and 2016 and preserved in liquid nitrogen.

But the in vitro fertilization attempt on Oct. 1 failed to produce an embryo after 72 hours of incubation, Augustine Tuuga, the director of the Sabah state wildlife department, said as reported by the New Straits Time.

“What we have gathered from the experts is that possibly Tam’s sperm was not of good quality,” Tuuga said. Tam’s age would have been around 60 years in human terms when his sperm was harvested.

Given these circumstances, the rhino experts were not hopeful about the results. “Given that IVF in Sumatran rhino has been tried only about 6 times, we expect a high failure rate,” John Payne, the head of the Borneo Rhino Alliance (BORA), which was involved in the effort, told Mongabay in an email. 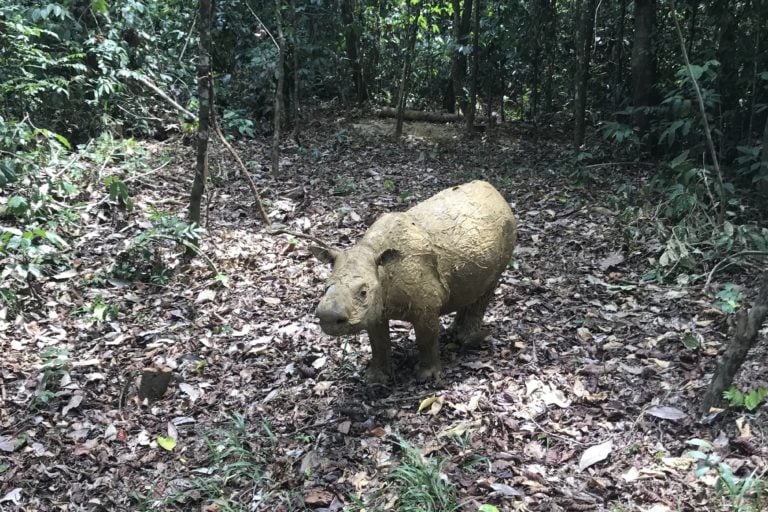 “Iman’s egg cells are fine,” Payne said. “Tam’s sperm quality is likely to be the main problem. Imagine taking sperm from a 70 year old man with kidney disease — what do you expect? That is Tam.”

The fact that the team had to rely on “poor quality” sperm from a single aged rhino has highlighted the lack of progress on an agreement between Malaysia and Indonesia that would have allowed Iman’s eggs to be fertilized with healthy sperm from one of Indonesia’s rhinos. At the Sumatran Rhino Sanctuary in Way Kambas National Park, Sumatra, Indonesia hosts three young males, including one who has already successfully fathered two calves.

However, Indonesia insists that to send sperm samples from its rhinos in Way Kambas to Malaysia, both countries would need to sign a memorandum of understanding for an exchange of specimens of protected species, the transfer of which is regulated under the Convention on International Trade in Endangered Species (CITES) and the Convention on Biological Diversity (CBD).

Tuuga said the IVF efforts would continue and be improved, while also urging Indonesia’s help in providing sperm from the Way Kambas rhinos.

Christina Liew, the Sabah state minister of tourism, culture and environment, said representatives of both countries have had regular meetings, most recently in August, to discuss the possibility of obtaining sperm from the rhinos in Way Kambas.

No more than 80 Sumatran rhinos, a critically endangered species, are believed to survive in the wild, often living in small populations too small and isolated to be reproductively viable. Seven rhinos are held at Way Kambas, one in a sanctuary in Indonesian Borneo, and one in Malaysia. Two calves were born at Way Kambas after being conceived naturally, while previous IVF attempts in Malaysia were unsuccessful.

Indonesia’s environment ministry said in August that the two countries had earlier this year agreed on a new partnership that would see eggs shipped from Malaysia for IVF attempts in Indonesia. To date, however, the paperwork to finalize the deal has still not been completed.