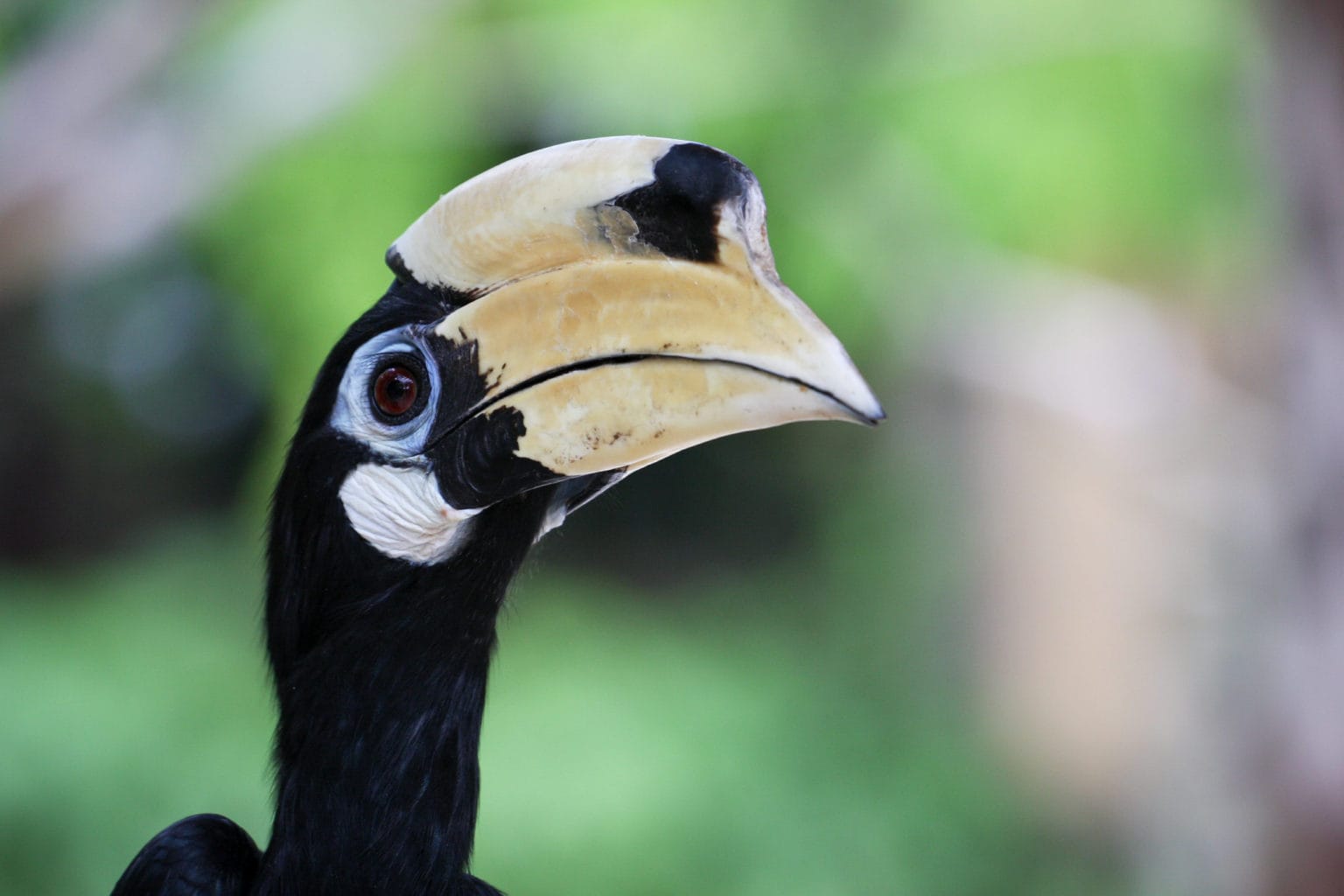 In August 2021, authorities at Malaysia’s Kuala Lumpur International Airport discovered a shipment of eight hornbills, caged but alive, en route to international markets. The Department of Wildlife and National Parks (PERHILITAN) seized the birds and arrested two men for failing to display valid documentation for possession of the birds. Among the haul was a baby helmeted hornbill (Rhinoplax vigil), a critically endangered species hunted to the brink of extinction for its distinctive ivory-like bill casque that’s prized by collectors in parts of Asia.

Although the severed heads, feathers and casques of many hornbill species are mainstays of the illegal wildlife trade, experts say the recent seizure in Malaysia confirms their suspicions that live hornbills are being trafficked from Malaysia abroad. And it could be a regionwide trend.

Hornbill experts were surprised earlier this year by the first case of live hornbills being trafficked into Indonesia from the Philippines. The incident, in Manado, in Indonesia’s North Sulawesi province, involved two Philippine-endemic southern rufous hornbills (Buceros mindanensis).

“In Indonesia, most cases [of hornbill trade] are domestic, between islands,” Yokyok “Yoki” Hadiprakarsa, founder of the Indonesian Hornbill Conservation Society (Rangkong Indonesia) and member of the IUCN Hornbill Specialist Group, told Mongabay. “Usually, it is birds from Indonesia that are being smuggled to other countries, so that was shocking to many hornbill conservationists in the world.”

Yoki said the recent seizure of live hornbills in Malaysia has put specialists on high alert. “We are not sure whether these cases will become more frequent, or if it’s just during the pandemic: we are trying to figure it out. The main question for us is, where did these birds come from? From the wild? From captivity? And are they from Malaysia or Indonesia, or somewhere else?”

The answers remain unclear. Although all eight birds were species native to Malaysia, whether they were sourced from the wild, shipped into Malaysia from outside, or bred in captivity is unknown. According to TRAFFIC, an international wildlife trade monitoring group, investigations are ongoing.

Tip of the iceberg

Following the incident, TRAFFIC conducted a census of seizure reports from across Southeast Asia to evaluate the illegal live trade threat. Their findings indicate that the recent cases in Malaysia and Indonesia are just the tip of the iceberg.

Between 2015 and 2021, there were 99 incidents involving 268 live hornbills spanning 13 species. “That’s an average of 37 incidents per year in seven Southeast Asia countries,” Serene Chng, Southeast Asia program officer for TRAFFIC, told Mongabay in an email, adding that these figures likely underestimate the true threat since seizure data is “patchy.”

While not all seizure records documented species information, wrinkled hornbills (Rhabdotorrhinus corrugatus), great hornbills (Buceros bicornis) and oriental pied hornbills (Anthracoceros albirostris) were the three most trafficked species, accounting for half of the confiscated hornbills.

The investigation also revealed that live hornbills are being traded within national borders and internationally. Apart from the Indonesia-Philippine route, live hornbills have been trafficked from Indonesia to Russia, China and Malaysia. The eight hornbills recently confiscated in Kuala Lumpur were destined for Bangladesh, a transit location, before being sent on to an unconfirmed destination country.

Even without the illicit trade, hornbills are being pushed toward extinction as a result of their slow reproductive cycle and highly specific nesting requirements. There are more than 30 species in Asia, all of which require large trees with suitable nesting cavities.

Most species breed once a year, raising a single chick. The mother and chick live sealed inside the nest cavity for up to five months, completely dependent on the male for nourishment. If the male is killed, the family perishes. Therefore, every hornbill eliminated from the wild is a serious blow to dwindling populations.

Yoki said the inclusion of a young helmeted hornbill in the recent seizure suggests that people could be intent on breeding and farming the species for their head casques — a venture doomed to failure, according to Yoki, who said he knows of no cases of helmeted hornbills successfully held in captivity. They are “too sensitive and too picky,” so inevitably die.

“Helmeted hornbill poaching in places like Indonesia and Malaysia is going through the roof, so clearly there is an increased demand over the last few years,” said Chris Shepherd, executive director of Monitor, a nonprofit dedicated to lesser-known species involved in the wildlife trade.

In particular, Indonesian Borneo is a hornbill poaching hotspot. In recent years, border authorities have made massive seizures of hornbill casques that were due to be shipped overland to Malaysia. Although the international border is now shut due to the pandemic, Yoki said that information on the ground suggests poachers and trafficking syndicates, who are likely feeling the financial pinch, are using this period to amass wildlife products. “Many people need money … Soon after everything eases and the borders open, I think sadly there will be more trade,” Yoki said.

While seizure records indicate that live trafficking is a threat, vital up-to-date information is missing. No one knows how many hornbills are taken from the wild, where they are taken from, or where they end up. Crucially, the effect of this trade on wild populations is largely unknown, and, with population numbers already in decline, experts say this information deficit is a serious concern.

According to Shepherd, the absence of research data means that policies to protect hornbills in many parts of the world are undermined by legislative loopholes that facilitate the continuation of the illegal trade. “There needs to be more knowledge about the levels of live hornbill taking [so] we can prioritize which species need better protection and in which country should legislation be improved,” he said.

Part of the problem, according to Shepherd, is that many hornbill species are not adequately protected by CITES, the international treaty to ensure commercial wildlife trade doesn’t lead to species extinctions. In many cases, hornbills can be traded legally given the correct documentation and permits that indicate the bird was not taken from the wild.

Although most trafficked live hornbills are likely to end up in the hands of affluent private collectors who have the means and space to accommodate them, some might pass through unscrupulous zoos for re-export or sale.

“There’s a lot of laundering of wild hornbills and there’s a lot of declaring of wild-caught hornbills as captive bred and then legally trading them in that way, when in fact they’re taken illegally from the wild,” Shepherd said, adding that work needs to be done to improve CITES as a tool that protects hornbills from trafficking.

In terms of domestic trade, seeing caged hornbills for sale in bird markets is not as common as it once was, according to Shepherd. “For two reasons: one is the authorities have cracked down on certain species in the markets; and the other is that a lot of the trade has shifted online.

“Governments should put in place legislation to knock out the online trade. In some countries, it’s illegal to advertise protected wildlife — and that’s a good step — but in some others, they’re not even there yet,” said Shepherd, adding that the digital platforms themselves must also do their part to curb wildlife crime.

Progress is being made on this front. The Coalition to End Wildlife Trafficking, comprising WWF, TRAFFIC and the International Fund for Animal Welfare (IFAW), helps online companies to introduce policies that crack down on the trade in live animals and wildlife products. This week, the coalition announced that engagement with 47 companies to date has resulted in the removal of more than 11.6 million listings of prohibited wildlife since 2018.

Nonetheless, the scale of the online trade in hornbill products in parts of Southeast Asia was highlighted in a 2019 report from TRAFFIC. Focusing on Thailand, the report found 236 online posts between 2014 and 2019, offering 546 hornbill parts and products from nine hornbill species. More than 80% of the online merchandise was from helmeted hornbills. Although the Thai government carried out enforcement action against at least five online cases, trading activity persists, the report says.

According to Chng of TRAFFIC, enforcement action on live hornbill trafficking has been mixed. Since hornbills are a high-profile bird, there have been several successful prosecutions in the region involving prison sentences and fines of up to $4,200. The two suspects implicated in the recent seizure in Malaysia could face charges that carry fines of up to $50,000 and/or a 10-year prison sentence under Malaysian law. However, Chng said that many penalties have been light, with arrests rarely leading to convictions.

As with so much wildlife trafficking, tracing the hotspots of trade and poaching and making the necessary adjustments to legislation and enforcement efforts is a continuous process. But for hornbills, the clock is ticking.

“Given the levels of deforestation in Southeast Asia, hornbills are already in a lot of trouble,” Shepherd said, “so trade could be the straw that broke the camel’s back.”