By NewsroomNovember 21, 2019Conservation
No Comments

She said the rhino is being watched by veterinarians round the clock now as her health is deteriorating steadily.

According to wildlife vet Dr Zainal Zahari Zainuddin, tumours in Iman’s uterus, detected upon her capture in March 2014, have spread to her bladder and cannot be removed due to high risks to her immediate life. 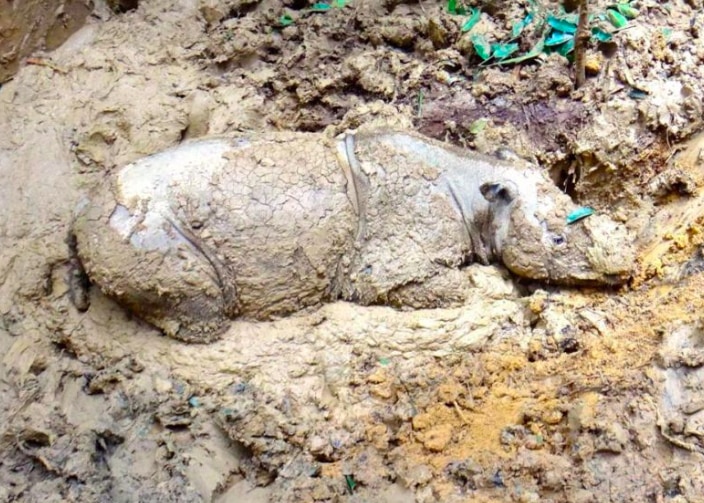 Original photo as published by Malaymail.com: Iman the rhino is being watched by veterinarians round the clock now as her health is deteriorating steadily. (Picture courtesy of Sabah Wildlife Department)

“Although the tumours are not malignant, they are spreading to her urinary bladder. The vets tell me that there is no way to halt the growth of these tumours, and surgery to remove them always was and still is too dangerous ― there would be inevitable major blood loss that would result in her quick demise,” Liew told a news conference here.

The news also means expediting the state’s wildlife agreement with Indonesia to run in vitro fertilisation that could potentially fertilise Iman’s eggs with a male rhino from Indonesia’s Sumatra.

The Sumatran rhino is the smallest species still living today and is said to be the closest to the extinct woolly rhinoceros.

Wildlife magazine National Geographic estimates there are fewer than 80 Sumatran rhinos in the wild today.

Liew said the Sabah government is still committed to working with Indonesia to preserve the species, adding she hope to expedite bilateral meetings to next week.

“We want to play our role to help prevent what is emerging as the first mammal species extinction of the 21st-century,” she said.

She added that a memorandum of understanding with Indonesia is nearly ready to be inked. The agreement is to collaborate on research, reproductive biology, husbandry and exchange of knowledge and experience.

“This needs to be done quickly as possible as time is of the essence at this point. It’s critical we do this now,” she said, stressing that Iman is on the brink of death.

Iman, 25, shed some 44kg last week. Her weight dropped from 476kg due to her loss of appetite.

“She is not eating her normal amount and is being given supplements. The situation reminds us of the case of Puntung, who was euthanised on June 4, 2017, because her squamous cell carcinoma was incurable and she was in pain,” Sabah Wildlife Department director Augustine Tuuga told reporters.

Tuuga said that wildlife experts are now eyeing another egg extraction when her reproductive cycle allows, but the problem was that medication given to prevent her tumours was also reducing her ability to produce eggs.

“Realistically, she can go at any time, but hopefully we can help her survive,” he said.

In the past, Sabah has tried to inseminate Iman’s egg with the frozen sperm from deceased male rhino Tam who died in May, but the low quality of each did not result in a successful embryo.

Since then, efforts have doubled to save the species by linking up with Indonesia, who has a small population of rhinos in the Way Kambas, Sumatra which they are also trying to breed.

Sabah has watched their last two captive rhinos in recent history die under the watchful eye of experts despite constant care without any successful breeding.