By NewsroomDecember 30, 2021Wildlife Crime
No Comments 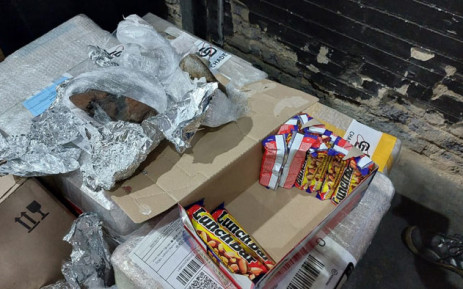 Pieces of rhino horn poorly hidden in a shipment of chocolates. Image: Hawks

A man arrested in connection with a consignment of rhino horn at OR Tambo International Airport will make his first appearance in the Kempton Park Magistrates Court on Tuesday.

The suspect was nabbed last week.

His arrest follows a spate of rhino poaching incidents across the country.

A security officer operating scanners at OR Tambo International Airport noticed a suspicious parcel and summoned members of the Hawks and the Forestry, Fisheries and the Environment Department.

The package was allegedly declared as a box of chocolates and wrapped as such but on inspection, officials found 6 pieces of rhino horn.

The parcel was destined for Shandong province in China.

The 46-year-old suspect spent the Christmas long weekend in custody and is expected to make his first appearance on Tuesday for contravening the National Environmental Management Biodiversity Act.

Of the 24 rhino carcasses found in South Africa this month, seven were found in the Kruger National Park, seven others were discovered in Mpumalanga, six in KwaZulu-Natal and four found in the Western Cape.