By NewsroomApril 9, 2020Anti-poaching
No Comments

SINGAPORE: A South African man was sentenced to 17 months’ jail on Wednesday (Apr 8) for trying to smuggle 11 pieces of rhinoceros horn through Singapore to Vietnam.

Thurman Shiraazudin Aiden Matthews, 45, had travelled from South Africa to Vietnam, via Singapore, three times to familiarise himself with the route before carrying out the deed. He was promised 20,000 South African rand (S$1,550) by an unidentified Chinese man he had met in Johannesburg if he succeeded.

The man, whom he met in October 2019, offered him “the opportunity to earn some easy money” transporting wildlife products such as rhino horns or lion bones to Vietnam. Matthews agreed and was introduced to two Chinese women who coordinated the transaction.

On their instructions, he collected two suitcases and cash to buy return tickets and took a pre-arranged flight from Johannesburg to Ho Chi Minh on Jan 4 this year. He was told that a person would remove the two suitcases before the X-ray screening at the Ho Chi Minh Airport baggage department, and he could leave the airport without picking them up. 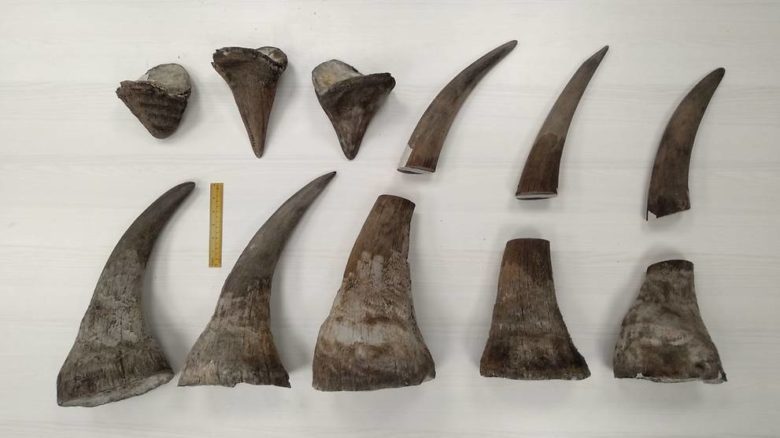 Original image as posted by: 11 pieces of horns belonging to the White Rhinoceros were found in the bags. (Photo: National Parks Board)

The horn pieces in the suitcases weighed about 22kg in total and came from five different white rhinos, which are protected under the Endangered Species (Import and Export) Act. Matthews took the flight from Johannesburg towards Vietnam, but was stopped while transiting through Singapore on the morning of Jan 5 this year.

Both suitcases, which were locked and wrapped in plastic cling wrap, were then removed for further inspection. Officers opened the suitcases in Matthews’ presence and found six pieces of cut horns, a laptop and snacks in the first suitcase.

Five pieces of cut horns, another laptop and more snacks were uncovered in the second suitcase.

The horns were wrapped with thin transparent plastic and covered in aluminum foil. The horns were sent to the Singapore Zoo for analysis, where they were confirmed to be from the white rhino species and taken from at least five rhinos.

Trade in white rhinos is strictly regulated, and Matthews did not have any valid South African export permit for the horns. He pleaded guilty to one charge of exporting the horns, belonging to a protected species, without a valid permit.

National Parks Board prosecutor Wendy Tan asked for at least 20 months’ jail, highlighting that at least five rhinos were killed for their horns. She added that Matthews admitted to travelling thrice to familiarise himself with the route, showing that he planned to smuggle the horns.

While Matthews has no convictions in Singapore, Ms Tan noted that South African authorities have provided unofficial records that Matthews was previously jailed for offences ranging from shoplifting and burglary to housebreaking.

He was released from a South African jail in March 2019 and was on parole until December that year. However, District Judge Adam Nakhoda said he would not place weight on these records, but would note them on the record.

Defence lawyer Sunil Sudheesan said there is scope for his client to be given below 15 months’ jail. He said his client was “a mere courier”, and that the Chinese man approached him, while the other accomplices “planned everything, packed everything and booked everything”.

He added that Matthews was jobless at the time and did not receive “a single cent” of the 20,000 rand he was promised. “The final ironic point I have to raise is that the accused person actually donates to the rhino conservation fund,” he said.

Judge Nakhoda said Matthews played his part by travelling and scouting the route, and certainly had a profit motive. “He may not have earned the money, but that doesn’t mean that there wasn’t a profit motive involved,” said the judge.

Matthews could have been jailed for up to two years, fined a maximum S$50,000, or both.