By NewsroomApril 24, 2020Conservation
No Comments

One of the five black rhinos brought to Akagera National Park last year from Europe has died.

The five rhinos: three females and 2 males were brought to Akagera National Park in June last year from the Czech Republic, the United Kingdom, and Denmark.

The dead rhino, Manny, was the elder of the two males in the group. 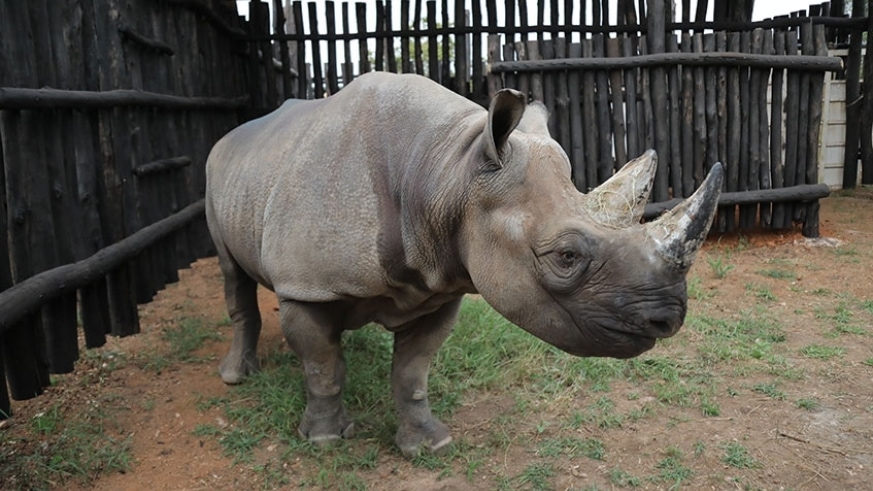 Original photo as published by The New Times. One of the five rhinos translocated to Rwanda from European zoos at Akagera National Park last year.

Manny, along with the other two: Jasmine and Jasiri were born in Safari Park Dvur Kralove, Czech Republic.

According to information from the European Association of Zoos and Aquaria (EAZA), the rhino died on the 10th of February, and preliminary reports suggest a tract disorder, although the final cause of death has not been determined yet.

“We can confirm that the rhino was not poached. The evidence suggests a digestive tract disorder, but a final cause of death has not yet been concluded. We are awaiting further laboratory results to provide additional clarity, but with major restrictions in place globally due to the COVID-19 pandemic, it is unlikely that we will receive these results soon,” read the statement from EAZA.

According to EAZA, the rhino was being closely monitored on a daily basis by a specialist tracking team and was being provided supplementary feed to support its continued adjustment.

“After detecting a sudden deterioration in his health and feeding behaviour, park management immediately consulted with veterinarians, but he, unfortunately, succumbed before a veterinary intervention could be made.”

EAZA said that the four remaining animals have continued to be monitored intensively and are reported in good health.

Estimates show that there are over 5000 black rhinos left and the latest translocation is seen as a major step towards their conservation and growth.

However, although translocations are an essential tool to boost species populations in the wild, it also naturally involves a degree of risk as animals adapt to novel conditions in their new environments.

To ensure the wellbeing of the rhinos relocated to Rwanda, EAZA says every precaution was taken throughout the translocation process and followed thorough planning by highly experienced veterinary, translocation and park management teams, in line with International Union for the Conservation of Nature’s (IUCN) guidelines.