By NewsroomApril 27, 2021Anti-poaching
No Comments 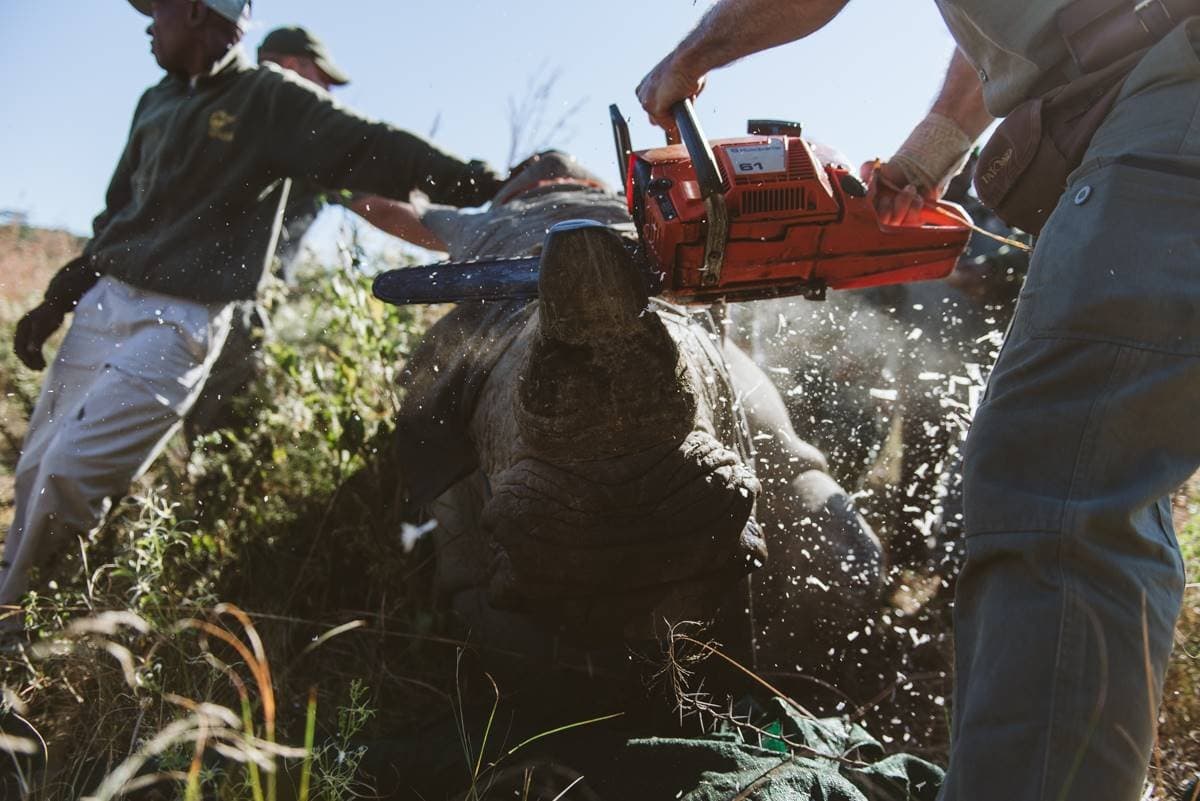 Ezemvelo KZN Wildlife carried out one of the biggest rhino dehorning operations in KZN. Image: As originally published by The Witness.

In an operation funded and supported by conservation NGO Wildlife ACT, EKZNW set out to dehorn the entire population of white rhino on the reserve. The exact numbers have been withheld for security reasons. The operation lasted three days.

The dehorning of rhino populations has been adopted as an effective tool in the fight to save the species from increasing poaching threats.

Although not a solution on its own, dehorning has proven effective when used in small populations and in conjunction with a number of other initiatives, including strong law enforcement, according to EKZNW.

“The chances of a rhino being poached is drastically reduced once the animal has been dehorned. The threat will always be there, but this is one way we can deter that threat. In order to be effective, it is important that the entire population is dehorned, thereby reducing the incentives for poachers to consider Spioenkop as a target,” said Eric Mlaba, Officer in Charge of Spioenkop Nature Reserve.

The Ezemvelo Game Capture team, with the support of Wildlife ACT, worked to successfully dart and dehorn the entire rhino population over the three-day operation. The team also notched the ears of several young rhino that were dehorned for the first time. Notching allows for individual rhino to be easily identified by monitoring and field ranger teams in the reserve, thus ensuring effective management of the population.

Dehorning rhino is a large-scale operation involving experienced ground teams, wildlife veterinarians and highly skilled helicopter pilots who are able to manoeuvre the animals into areas that are easily accessible for the teams.

The team on the ground works swiftly to remove the horn while the animal is sedated.

DNA samples are taken for the national rhino database, the drug is reversed and the team then moves off to watch from a distance as the animal wakes and walks off.

The operation needs to be carried out swiftly and efficiently, reducing stress and associated risk to the animals.

“It is a bittersweet feeling after an initiative such as this – the accomplishment of a highly successful operation, tainted by the unfortunate need to have to undertake such an invasive process due to the unnecessary demand for this animals’ keratinous horn. We hope, however, that this is only an interim measure to safeguard populations such as these while work is continued in the education and demand reduction space,” said Mark Gerrard, Wildlife ACT Managing Director.

Both black and white rhino populations in the region continue to face pressure from poaching syndicates who look to trade their horn to consumers primarily in Asian markets.

As rhino numbers across the country continue to decline, conservation efforts focus on proactive approaches to stop poachers before rhino are killed. Ezemvelo’s protected nature reserves, including Spioenkop, are home to some of the country’s key rhino populations.

“Funding is desperately needed in order to make operations like this more frequent. A rhino’s horn grows back, which means that these rhino that we have just dehorned will all need to be dehorned again in 18 months to 2 years’ time. We are hugely appreciative of the contribution from Wildlife ACT, without whose support this work would not have been possible,” said Mlaba.

Gerrard said partnerships are crucial to enable long term success in the conservation sector and Wildlife ACT was pleased to be able to provide assistance to Ezemvelo to enable their conservation efforts.

“Sincere thanks to the Rhino Recovery Fund for enabling this operation and, of course, the dedicated conservation teams on the ground,” he added.