By NewsroomMarch 10, 2020Conservation, Science and technology
No Comments

SAN DIEGO, CALIFORNIA: There are only two northern white rhinos left on the planet, and they’re both female. Unless scientists can make a dramatic breakthrough, the entire species will die with those two individuals.

In a nondescript building just north of San Diego, California, the fight to save the northern white rhino is coming down to the wire. However, the battleground here looks less like a scene from a wildlife documentary and more akin to something out of a science fiction novel.

At the San Diego Zoo Institute for Conservation Research, an army of scientists armed with liquid nitrogen, microscopes, and ultrasound machines is working around the clock to create an unprecedented first in the conservation world: they are looking to turn frozen rhino skin cells into baby rhinos.

It’s not just the science that is groundbreaking, but also the team looking to save this species. Composed mostly of women, the lab is a rarity in a field traditionally dominated by men.

The first step in this conservation effort began more than four and a half decades ago in 1975 when scientists established the institute’s “Frozen Zoo.” In a small room measuring no more than 36 square meters the skin cells of more than 10,000 individuals across 1,100 species sit in giant steel tanks suspended in time, frozen in liquid nitrogen.

Among the collection are the skin samples of 12 northern white rhinos. These are vital to the group’s efforts because there is such a small gene pool of living northern whites. 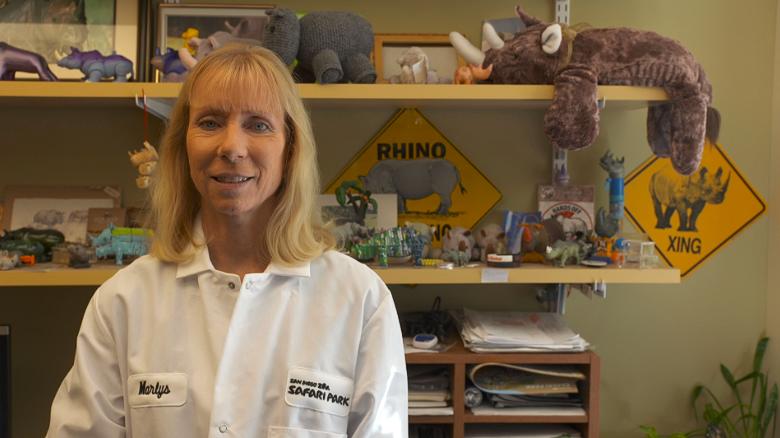 Original photo as published by CNN: Marlys Houck, curator of the Frozen Zoo.

The population has been decimated by poachers, who target rhinos because of the belief in parts of Asia that their horns can cure various ailments. The two surviving females both live under guard at the Ol Pejeta Conservancy in Kenya. Even though embryos have been produced in an Italian lab using eggs extracted from the pair, any future descendants from this kind of embryo would carry the genes of those two females.

That may not be enough genetic diversity to maintain a stable population. The hope is that the skin samples of those 12 individuals at the Frozen Zoo contain enough diversity to sustain the northern white species long-term.

The arduous task for these scientists is to create a rhino population from those samples.

Marlys Houck is curator of the Frozen Zoo. She graduated high school in 1979, the same year the Frozen Zoo froze its very first northern white rhino skin cell. She later joined the institute to work on the rhino project.

“I was hired specifically to try to make the cells of the rhinos grow better because they were one of the most difficult to grow cell lines,” she told CNN.

Since then, she’s figured out how to successfully grow and freeze the skin cells of the northern white.

The impact of this work is not lost on her. “We’re losing species so rapidly,” she said. “One of the things we can do is save the living cells of these animals before it’s too late.”

“We’re at the forefront of science today,” she added. “If we do everything right … these cells should be here 50 years from now being used for purposes that we can’t even imagine today.”

Marisa Korody is one of the four scientists tasked with turning these frozen cells into new life. They have to reprogram the frozen skin cells into pluripotent stem cells. In layman’s terms, Korody explains that “stem cells can become any cell type in the body if they’re given the right signals.”

The aim is to ultimately turn the stem cells into sperm and eggs. The ambitious feat has only been achieved in animals by Japanese scientists. While Korody and her team have looked to that research as a road map, she admits that doing the same with rhinos is uncharted territory. “We don’t really know what twists and turns we need to take in order to get from A to B,” she said. 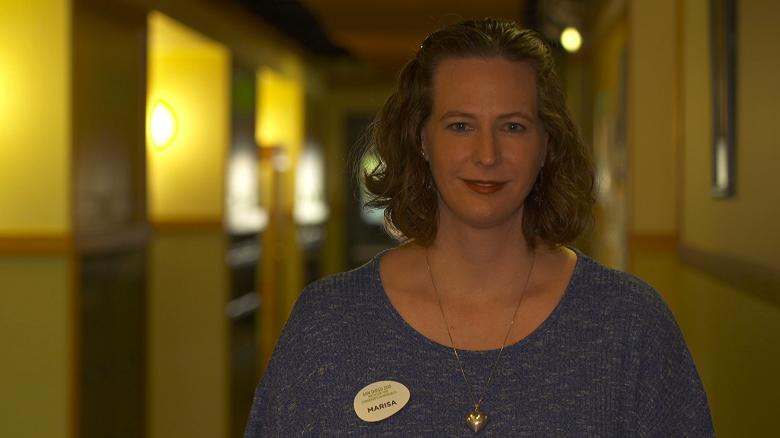 “They haven’t even figured out how to do this in humans,” she added. “We have as much information as we possibly can about humans. We have a fraction of that for rhinos.”

Korody says being at the forefront of this kind of science has been a dream job. “This was really the first project that’s trying to apply this type of science to conservation as a whole,” she said.

She may spend most of her time at work looking through the lens of a microscope, but her mind is always on the final goal for the rhinos: “We want to be able to put them back into the wild one day and have them living free.”

Because the remaining two female northern white rhinos can’t carry a pregnancy, even if the team can create embryos, the last obstacle is finding rhinos who can carry them to term.

The woman tasked with that job is Barbara Durrant. As the director of reproductive sciences, she’s spent four years studying the reproductive systems of six female southern white rhinos at the institute’s sister facility, the Nikita Kahn Rhino Rescue Center.

Though the rhinos at the center are a different species, Durrant says they are the closest relative to the northern white. The aim is to eventually have them be surrogates for northern white embryos. 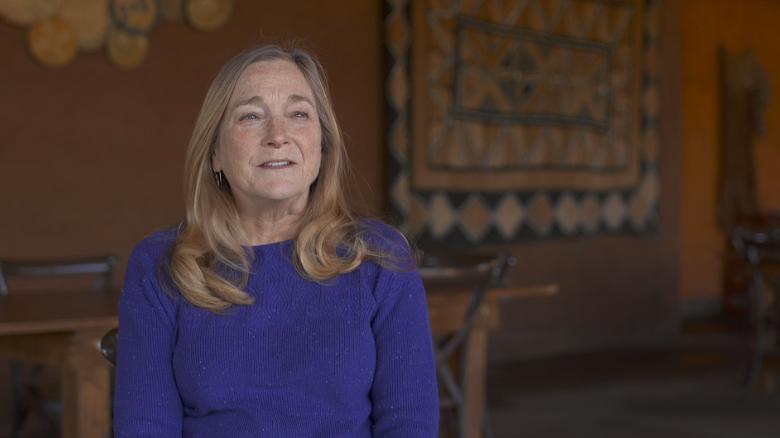 On any given day, Durrant can be found conducting ultrasounds to help her understand each rhino’s distinct reproductive cycle. In 2019, two of the center’s females gave birth to southern white babies. Both were conceived via artificial insemination, giving Durrant and the teams working on the rhino project hope for the future.

Durrant believes one reason the project works so well is because there are so many women involved. “Women are naturally collaborative with each other,” she said. “Because we have so many obstacles along the way and challenges and setbacks, we support each other and we have sympathy for each other.”

Houck says women tend to be naturally nurturing. “The cells are living little organisms that we’re growing and tending almost every day, and I think women are drawn to taking care of something and growing it into something more.”

“It’s wonderful leading a team of women, and I really think they’re changing the world,” she added. “People are going to look back and see it was this amazing group of women who quietly, unrecognized, work at this and just get better and better.”