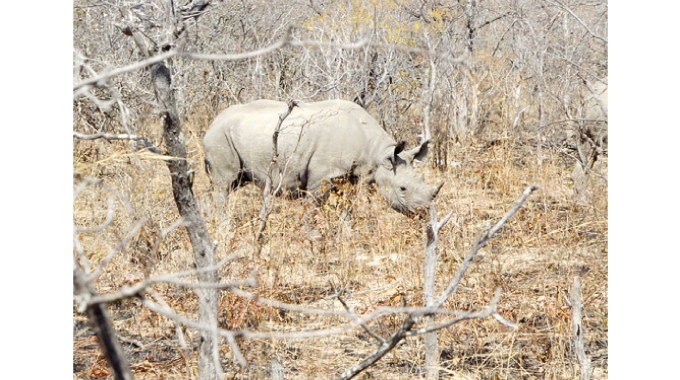 The Midlands Black Rhino Conservancy has not recorded any cases of rhino poaching in seven years. Image: As originally published by The Chronicle.

The vast swathes of savanna grasslands turn into an immense animal conservancy at the 50 km peg as one drives out of Kwekwe along Mvuma Road. The Midlands Black Rhino Conservancy (MBRC) imposes itself as if to confirm its importance in a country known for having big animal protection areas in the form of national parks such as the expansive Hwange and Gonarezhou.

The MBRC is not only home to the rare species of black rhino, but also accommodates a good variety of other wildlife such as elephants, resident sable, leopard, eland, kudu, giraffe, crocodile, painted African dog, African rock python and waterbuck amongst others.

Although the main objective of the slightly more than 60 000-hectare conservation area is to protect and conserve the environment and wildlife, particularly but not limited to the black rhinoceros, its scope is not limited to that, it also aims to promote and engage in best wildlife and land management practices appropriate to the attainment of its primary task.

The MBRC was created in the late 1980s after concerns were raised about the extent of drought and black rhino poaching throughout Zimbabwe. In response to those calls there came the need to accommodate the black rhino and other species which were threatened with extinction from high to low risk areas.

Its birth was a result of the joining of 14 properties that formed a trust which gave a total of 63 000 hectares to accommodate the rhino, which was under threat from border areas as it could easily be poached and sneaked into neighbouring countries.

With the assistance of the Government, a sizeable number of black rhinos were translocated to the area where they found protection and an environment suitable for their breeding.

The MBRC is a less drought prone area and offers much better protection with few rhino losses being recorded.

Having started with about 50 rhinos in the late 1980s, a few were translocated for various reasons such as territory related infighting, inbreeding and some to poaching while destruction of vegetation was rampant in the area and a sizeable number of rhinos were lost.

During the height of land reform programme in the early 2000s, some farmers also took advantage and settled themselves within the conservancy.

Uncoordinated settlements led to increased poaching as well as increased destruction of the environment suitable for rhinos.

This posed a threat to their lives with the number drastically falling to three – as the protected animal almost faced extinction.

Having noticed this, the trust sought the intervention of the Government and also came up with measures to try and save the rhino from extinction.

Among other interventions, the MBRC engaged the community to educate them on wildlife conservation, periodically donated food hampers to alleviate poverty, which tends to lead to poaching as well as rolling out a tree planting project that will reclaim the environment.

Recently over 2 000 families received food hampers and seed, including cowpeas and sorghum, as the conservancy promotes the farming of climate change resistant crops.

MBRC chairperson, Mr Garry Killilea believes that engagement of the community and educating them and also ensuring that they are well fed will reduce chances of poaching.

Mr Killilea said in their quest to protect the black rhino and the environment, the MBRC was not ignoring the plight of the people near the conservancy as they try to minimise situations that may result in poaching of the wildlife and destruction of the environment.

“We want to continue working together with our community. We have lined up a number of projects for the benefit of the community. This is why we also developed the Community Development Centre within the conservancy which will, among other things, offer environment and wildlife conservation courses to the community and learners. We have also come up with hunger mitigation measures so that we empower our community,” said Mr Killilea.

The trust has not recorded any case of poaching for about seven years, resulting in the number rising to eight, with two more births expected this year.

According to MBRC Conservator, Mr Brilliant Chibura, uncoordinated resettlements remained the biggest challenge in the conservancy.

“The first thing is that unsanctioned or uncoordinated settlements are rampant with people dishing each other land within the conservancy without us being consulted. Some of the people are also doing so without the knowledge of the Government,” said Mr Chibura.

Be that as it may be, Mr Chibura believes educating new settlers about wildlife protection is important.

“Unlike the rest of conservancies in Zimbabwe, this is an Intensive Protection Zone certificate holder, meaning that all animals within are wild. The moment the settlers come in, they escalate chances of human wildlife conflicts hence the new settlers have to be oriented so that they learn how to stay with the wild animals,” he said.

The programme has started reaping rewards after some farmers received training through the MBRC wildlife protection management college.

He said some farmers have removed the boundary fence to allow free roaming of the wildlife.

“We are not against the land reform, but we are appealing to the Government that farmers who settle within should specialise in cattle ranching so that they avoid cutting down trees for farming. The first thing crop farmers do is to cut down trees for farming. Some of the trees that are cut are the ones that the rhino survives on,” said Mr Chibura.

There has also been a drastic change in land use, with farmers taking heed of the call by the conservancy to live in harmony with nature.

This, according to Mr Chibura, has seen poaching cases drastically falling.

On the environment, he believes the tree planting project will go a long way in restoring vegetation which has been destroyed by farmers.

“We have started distributing trees and we expect to plant more than 10 000 plants by year-end. We have a seedling centre where every member of the community is free to collect tree plants. We are also working with schools which we are equipping with tree planting projects,” he said.

The area’s traditional leader Chief Gwesela said they were behind MBRC programmes, adding that he would do everything in his power to ensure that the settlements were stopped.

“I am in total support of the MBRC project and we do not want people who just give themselves land inside the area. I am looking into the matter and I will deal decisively with such elements as we want our rhinos to be safe. If I fail, I will engage the Government,” he said.

He said the community was also in full support of the conservancy and were now able to report poaching cases.

“We have worked well with the MBRC to educate the community of the dangers of poaching and other illicit acts and I am happy it is now paying dividends. People are now able to report each other whenever poaching happens, which never used to happen before,” said Chief Gwesela.

With the full backing of the community and traditional leaders, the MBRC is set to thrive which will make its rhino conservation a resounding success.