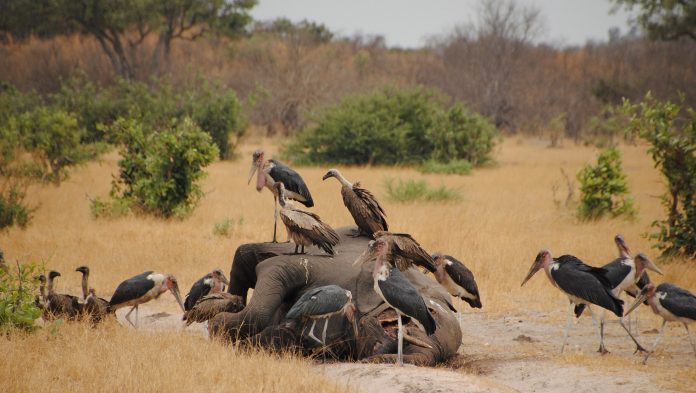 Members of the diplomatic corps in Botswana have recently been updated on elephant mortality in the Seronga area which has seen 281 of the species perishing.

Giving the briefing, acting permanent secretary in the Ministry of Environment, Natural Resources Conservation and Tourism Dr Oduetse Koboto said from the first carcass discovered on the Namibian side, there had not been any more elephant deaths reported in that country.

Most carcasses, he said, were found some 100 metres away from the natural water source adding that it was evident they died after visiting water pans.

He reiterated that poaching had been ruled out as all carcasses were found with tusks.

The motive for poaching was ordinarily to remove tusks, he said.

Dr Koboto said no other animals such as zebras, lions and scavengers had been found dead in the area.

The diplomats heard that investigations had been carried out with samples collected from old and fresh carcasses which were sent to national laboratory for bacterial tests. The carcasses tested negative for anthrax which then called for further examinations and tests, he said.

He said samples were then sent to South Africa, Zimbabwe, US and UK for pathology and bacterial tests. The focus, he explained, was to determine if there was any bacteria prevalent or poisonous substances in the area and historic trends.

Dr Koboto said the ministry had assembled a team of forensic investigators comprising Department of Wildlife and National Parks, Botswana Police Services, Botswana Defence Force and intelligence officers. He said the criminal route would be taken if results pointed to a human cause for the elephant mortality.

The results would also assist in determining if there was any virus in the region and allow authorities to define the protocols for dealing with such, Dr Koboto said. He said it would help the southern Africa region to look into management instruments to better combat animal diseases.

On another matter, Dr Koboto said in 2018 Botswana experienced a spike in rhino poaching.

Dr Koboto said the high number recorded in 2018 prompted the department to change strategy including enhancing intelligence as well as dehorning rhinos to deter poachers.

He said thus far nine poachers had been arrested while 17 had been killed.