By NewsroomFebruary 28, 2022Anti-poaching, Conservation
No Comments 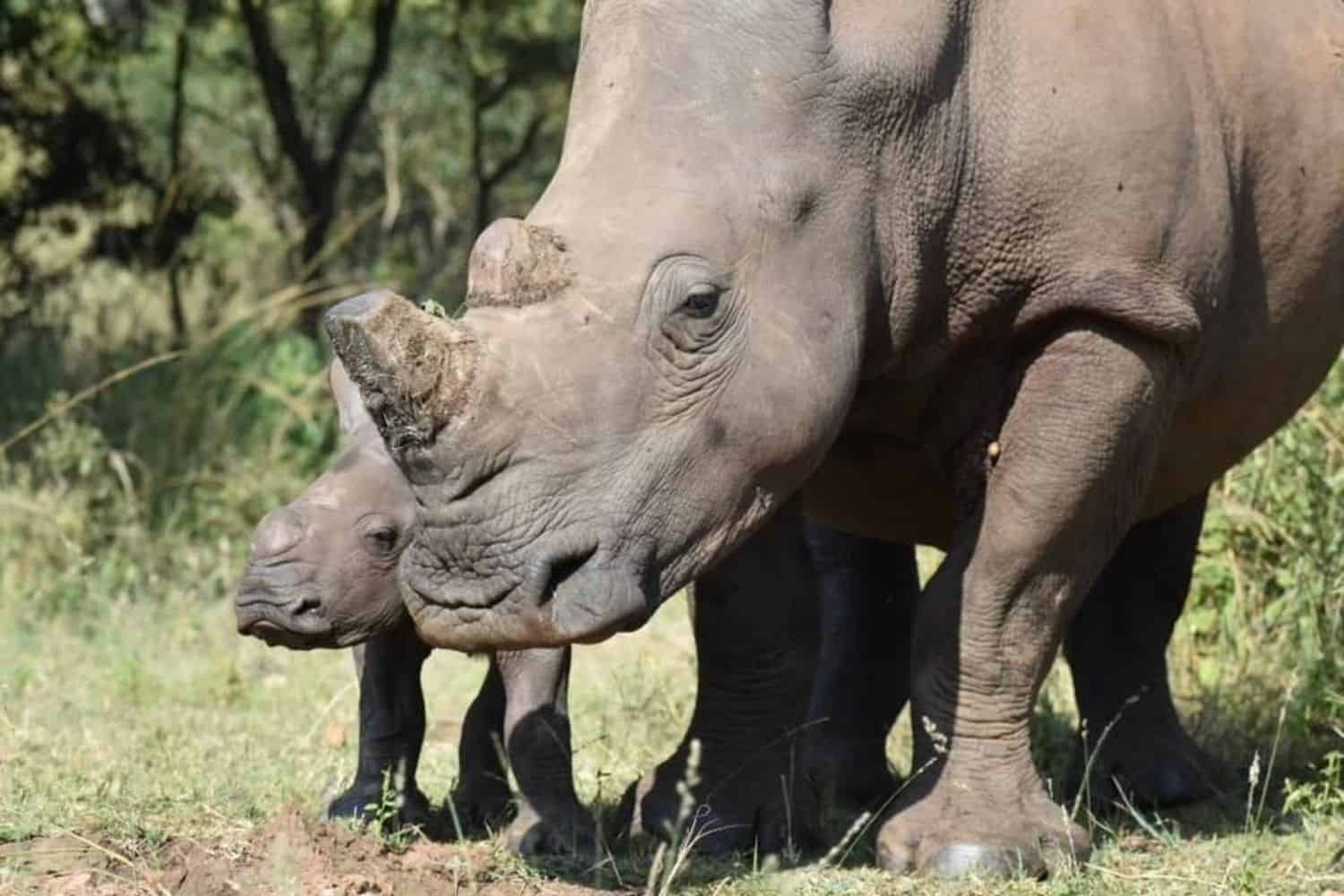 Blizzy and her mother, Wyntir at the Care for Wild Sanctuary. Image: Facebook

A tiny white rhino calf born to two orphaned rhinos turned one week old this week, a much-needed milestone for a species under constant threat of extinction.

Blizzy, named in honour of the journeys her mother Wyntir and father Storm have been through, has officially had her first mud wallow, and is growing well.

She was born on 13 February and is the world’s first rhino calf who was conceived naturally by orphaned parents due to poaching.

The Care for Wild Rhino Sanctuary team cannot get enough of little Blizzy, who is under the constant, watchful eye of ranger Nkosinathi and the rhino monitor team.

When the sanctuary’s team first laid eyes on Blizzy, it was an emotional moment for CEO Petronel Nieuwoudt, who together with the team run the world’s largest orphaned rhino sanctuary.

Wyntir was found at two months old and weighed 107kg when her mother was killed by poachers. She was rescued from Kingfisherspruit in the Kruger National Park.

Left alone, she was attacked by predators and had her ears ripped off by hyenas.

Storm was orphaned in the Limpopo area at four weeks old. Poachers murdered his entire family and left him to die more than 10 years ago.

Wyntir and Storm were brought to Care for Wild as part of more than 100 rhino orphans rescued since the conservation project began in 2011.

They underwent extensive rehabilitation before being rewarded and released. When rhinos are released at Care for Wild, they are protected 24/7 by guards, an elite K9 and a mounted unit.

“I look at both Wyntir and Storm and all in one moment I see their whole journey. Every second of struggle, every hour of effort, every sacrifice and every person who gave everything to save them.

“Care for Wild’s vision is to secure the future of the species through viable black and white rhino breeding populations protected by communities.

“This baby is a symbol of the life and light that is possible. She is hope for the species and for humanity.

“Rhinos belong to the world and it is all of our responsibility to save them,” said Nieuwoudt.

Nieuwoudt warned rhinos could be extinct in the next ten years.

Since 2011, the Kruger Park has seen a white rhino population decline of 75%.

Despite a reported decrease in rhino poaching in 2021, compared to the pre-Covid period in 2019, the Department of Forestry, Fisheries and the Environment (DFFE) noted an uptick in private reserve poaching in their latest statistics.

A total of 451 rhino were poached in South Africa last year – 327 within government reserves, and 124 on private property.

A total of 209 rhino were poached in the Kruger National Park, the only national park to be hit by the syndicate.

The DFFE noted a 24% decrease in poaching on government reserves, but expressed concern that private reserves, notably in Limpopo and Mpumalanga, were bearing the brunt of being “easy prey”.

This, the department said, was one of the “unintended consequences” of increasing anti-poaching activities in the Kruger Park, which has resulted in more arrests and convictions.