Moments that stand out in the rhino poaching world 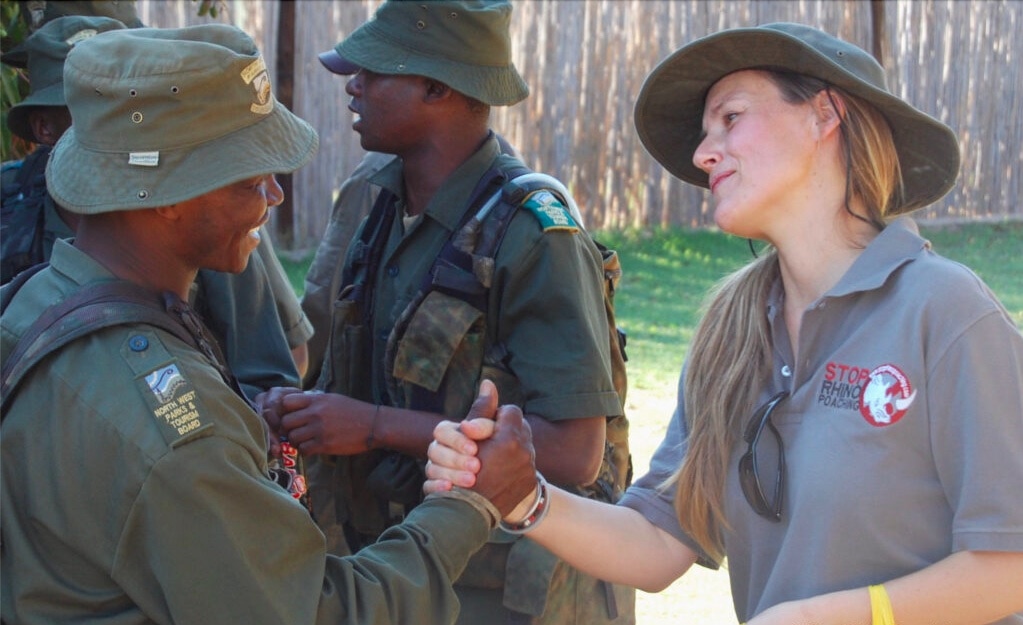 The Government of South Africa announced recently that 451 rhinos were killed by poachers in 2021. South Africa has lost more than 9,000 rhinos to poaching since the start of this crisis in 2007. Elise Serfontein, the International Rhino Foundation’s South Africa advisor and the Founding Director of StopRhinoPoaching.com, recently sat down to collect her perceptions of what it is like for the people on the front lines of the crisis, working to save rhinos from extinction. These are her stories

A simple act of kindness

A tough, bush-hardened group of rangers stood before me in a line. Weary and tired, they’d been put through their paces on ranger training, and it was only week 3 of 6. Mid-way is the hardest and my visit was a surprise to boost morale. Walking up to the first ranger, I dug into my grocery bag and handed him a bar of chocolate. Instantly, his whole face lit up and the range of emotions, amazement and gratitude I saw in that moment will warm my heart forever. It was the same with the second ranger, and the third, and by the fourth my resolve to do everything I possibly could to help rangers in this fight was cemented. They say that the simplest act of kindness can change the world. I’ve seen that play out, even if it changes the world for only a few moments.

It was 2010 and we had been standing alongside probably the 3rd known incident of a rhino found poached and still alive. When the vet pulled the trigger, something broke in my soul. Maybe it was the way the bull’s entire body levitated off the ground on impact. Or the shatteringly loud bang from the FN R1 rifle. Or the absolute finality of a life lost so unnecessarily and in such a brutal way. He had been alive for five days with his horns cut deeply off his face, and now at least, he was free again.

Keep trying no matter how impossible

A fuzzy light in a sea of pitch-black illuminates a yellow bulldozer. Inside the raised bucket stood the lone figure of Mick Reilly, looking down at the drought-weakened white rhino suspended on ropes below him. The scene before me was quite surreal, but there was no other option to lift such a huge deadweight. Mick has come up with this plan to get the rhino up onto his legs to help his circulation, get him moving even if just a little.

The first time we lifted him, he cried out in pain. I had never heard an anguished cry like that as it pierced into the night sounds of crickets and frogs. Mick showed me that night that you keep on trying no matter how impossible. You stand there in the cold and quiet and look to all the stars in the night sky above and pray for a miracle. Drought is a devastating thing, and despite all efforts, still claimed this victim.

Another drought victim was saved though, a new-born white rhino calf. Mom simply had no milk, and with darkness approaching Mick made the call before the hyenas would lurk. I was given the chance to give a brand new, very thirsty baby rhino his first ever drink of milk. I will never forget spending his first night of life soothing his calls for mom. The experience brought me a newfound love of rhinos along with a healthy respect for the months of commitment that lay ahead for the Reilly’s and what goes into raising a rhino.

We sat in the Skukuza Court – me a bundle of nerves. As the suspect walked through the door from the cells, our eyes met for the briefest of seconds before he looked away. I sobbed, the kind where your whole-body shakes, but silently, with my husband holding my hand and consoling me as best as he could in such a formal setting.

In the dock stood Rodney Landela, Regional Ranger of Marula North, Kruger National Park. Rodney who I trusted. Rodney who I respected and admired. Rodney my friend. Rodney who I believed would be the future of conservation in South Africa. Rodney turned rhino poacher. For his colleagues in Kruger and all who knew him, the ultimate betrayal.

At Cape Town International Airport, I meet with Anthony Rissik and his daughter Anna. Bundled inside Anna’s pink fleecy blanket is the most beautiful puppy I have ever seen. They are donating her to StopRhinoPoaching.com to become a Rhino Dog. As we say our goodbye’s and walk towards the baggage bay, I’m blown away at the bravery of this young lady, the size of her heart, and what she has just given up to help rhinos. Holding her soft warm puppy in my arms, I turn around to watch them go and see Anna crumple and melt under her dad’s arm. I could not have managed what she just did.

The blood trail and tracks tell the story of his last minutes of life. Running. Stumbling. Falling. Getting up. Falling. Running but slower. Eventually falling, and eventually dying.

A female also lay dead, her horns off, not far away from where his carcass was found. His shooter had been off target, delivering a bullet that would kill him slowly, giving him time to run into the darkness and the bush to try and escape. He was one of the biggest and most magnificent rhino bulls I had ever seen. Now, standing alongside the investigating team as they removed his huge horn, I really questioned how poachers could do this again and again in cold blood.

Its dark. Really dark, scary dark. We are in the middle of nowhere in Big 5 territory. I can hardly make him out it’s so dark, but Mark McGill, Technology Operation Manager of Kruger National Park, is standing reassuringly close. He is fiddling with a piece of high-end technology that we have spent months saving up to purchase.

He knows every switch in the dark from memory, and suddenly the world in front of my right eye lights up. He presses another switch and a thermal overlay on top of the night vision image fills the display.  Now, I truly understand what this level of technology brings to the phrase of “own the night”, and how now – somehow – we need to find the funds to help build night ops capabilities. The survival of the rhino depends on it.