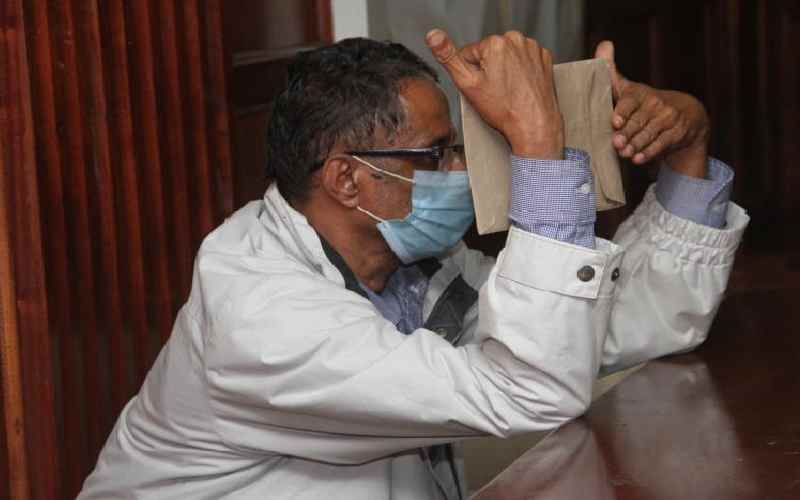 Mansur Mohamed Surur‘s frail look and subsequent exclamation before a magistrate would invoke anyone’s mercy that he was not the man who swiftly beat the police and escaped to an Arab country.

Maybe age humbled him — he is now 60 years — or maybe the gift of a small frame, wrinkled chin and haggard eyes in glasses all make him look exhausted.

But it is this man that the State fears would make a second escape in the event he is released on bail. He beat them once, and now they are twice shy to let him roam freely.

Surur is the most wanted Kenyan in the US for smuggling elephant tusks and rhino horns.

Just before a 36-minute hearing yesterday, Surur stood on the left corner of the dock, undeterred and mismatching the profile of the man whom the State says is a high profile poacher who must be flown where he is wanted most, the US, to face justice.

He clasped his hands and gazed at the white ceiling as if seeking intervention while occasionally returning gazes with a clasp on his forehead, in deep thought. He had been enjoying temporary freedom after Jomo Kenyatta International Airport Magistrates Court released him on bail. The Director of Public Prosecutions Noordin Haji yesterday told Milimani Court Magistrate Martha Mutuku that the ground had shifted as Surur now knows why he is wanted by the US Government.

According to the DPP, the father of one knows he will be facing five charges before a New York court. The first relates to a conspiracy to commit wildlife trafficking, the second is on wildlife tracking and which is similar to the third one. The fourth is on money laundering while the fifth is on conspiracy to distribute and process controlled substance.

Haji told the court that Surur may decide to vanish like his co-conspirator Abdul Aziz Saleh alias Badro, who went off the radar after learning that the long hand of law had finally caught up with Surur.

Badro had also been released by the JKIA court but has since ran away. The police are still hunting him.

“He left after his co-conspirator had been arrested, presented in court and later released pending receiving the extradition request from USA. Badru is at large since June 2019,” the DPP argued.

Surur may have been camera shy or he did not just want to have his photo taken. He hid his face behind an A5-evelope and when this did not work, he extended the shield using a folded white paper he pulled from the envelope. Maybe this paper contained his side of the story that he wanted the court to hear. Before the hearing, his lawyer, in a chitchat with the prosecutors, claimed he wanted to be tried in Kenya instead.

“Wananionea, mimi sijafanya kitu (They are implicating me, I am innocent),” he exclaimed.

On July 28, 2019 some days before Interpol raised a red alert on him, Surur took to the Northwest of Kenyan knowing that if he set foot on South Sudan’s soil, neither Kenya nor USA would pursue him. Unsure of what the Salva Kirr-led country would give him, he shuttled to Sudan three days later. He then set off 1,997 kilometres from Sudan to Yemen.

He had found a safe haven in Yemen, a country beset by violence and whose authorities may be more bothered about how to battle a Saudi-led Arab coalition than hunt one man wanted by the West. Yemen has no extradition treaty with Kenya and USA.

In the US, Surur is said to have been running a wildlife trophies smuggling syndicate involving Badru, Moazu Kromah, Amara Cherif and Abdi Hussein Ahmed, responsible for the poaching of approximately 35 rhinos and more than 100 elephants for close to a billion shillings in sales for more than a decade.