Mpumalanga farmer sentenced for dealing in rhino horns without permit

By NewsroomSeptember 15, 2020Law & legislation
No Comments 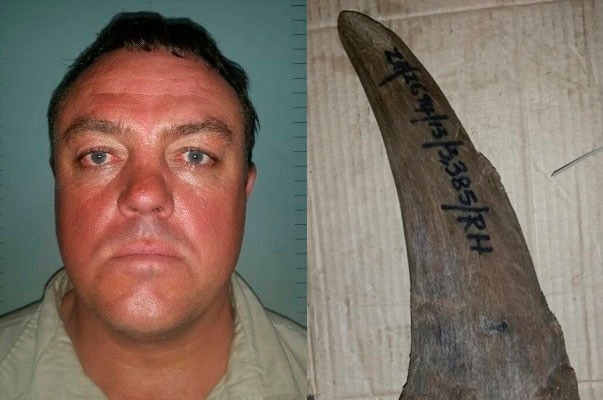 Deon Cornelius (48), has been found guilty and sentenced to pay a R10 000 fine or three years’ imprisonment as well as an additional fine of R50 000 to be paid to the Mpumalanga Parks Board for dealing in rhino horns. Phot as originally published by The Lowvelder.

A well-known Mpumalanga farmer was sentenced in the Middelburg Regional Court yesterday for selling rhino horns without a permit.

A statement by Hawks spokesperson, Capt Dineo Lucy Sekgotodi said the farmer, Deon Cornelius (48), had been found guilty and sentenced to pay a R10 000 fine or three years’ imprisonment as well as an additional fine of R50 000 to be paid to the Mpumalanga Parks Board for dealing in rhino horns.

On January 4, 2018, the Mpumalanga Hawks received a tip-off indicating a man from Gauteng was buying rhino horns from Cornelius at Buffelskloof in Middelburg without having a permit to buy or transport them.

An intelligence-driven operation by the Hawks and the K9 unit on January 5, 2018 found the Gauteng man in possession of a white rhino horn to the value of  R175 000 attached to the chassis of his white Lexus with cable ties.

Cornelius was also apprehended and was charged for contravention of Section 23 Act 10 of 1998 and Mpumalanga Nature Conservation Act Dealing in rhino horns without a permit.

Sekgotodi said the case against the two Chinese nationals and Joseph and Susanna was finalised in 2018.

“We believe that this will serve as a lesson to others who commit wildlife-related crimes that their days are numbered and their time is coming whereby they will have to face the mighty hand of the law.” Provincial Hawks head, Maj Gen Zodwa Mokoena

Feng was charged with illegal dealing in specially protected species and sentenced to either pay R60 000 or six months’ imprisonment.

He was also sentenced to a further 18 months’ imprisonment wholly suspended for five years with the condition that he is not convicted again and to pay R1 million to Stop Rhino Poaching as a victim compensation.

Joseph and Susanna were charged with illegal dealing in protected species and were sentenced to pay R20 000 or two years’ imprisonment.