By NewsroomDecember 14, 2021Wildlife Crime
No Comments 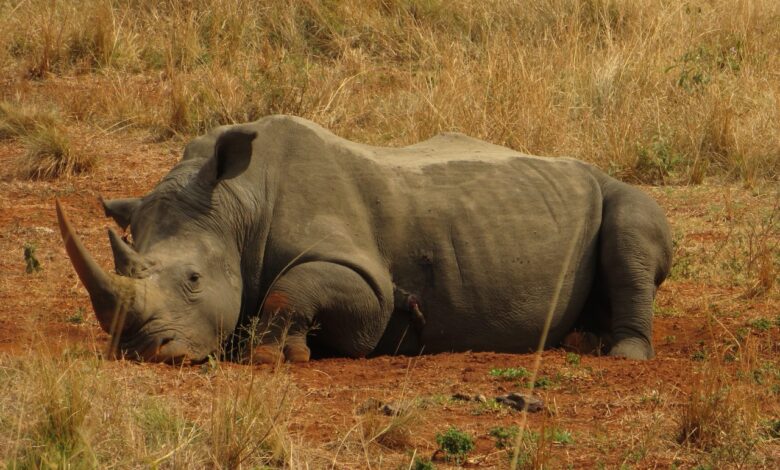 Rhino above for representation. Image: As originally published by Lowvelder

The rhino could not be treated and the decision to euthanise her was made. A white rhino cow has been euthanised.

She was found badly mutilated in the Kruger last week.

SANParks released a statement on Saturday December 11 relating to the devastating find, saying that its rhino dehorning team found the “badly mutilated female rhino in the south of the KNP on Thursday December 9.

According to the statement, SANParks is aware of a video circulating on social media depicting the severely injured white rhino cow.

“The video is distressing to watch,” warned SANParks.

The statement said that according to the veterinarian and the section ranger who attended to the rhino, it appeared as if the animal had been shot a few days prior to being found.

“Bullet wounds were visible in her head and foreleg and there were open wounds to her nasal cavity where her horn had been brutally hacked off. There were additional injuries to the lower back, presumably dealt to stun her,” said SANParks.

“A decision was made to euthanise the rhino due to the extent of her wounds and level of infection. “SANParks’ Environmental Crime Investigations Unit attended to the scene to collect all available evidence.”

Reacting to the discovery of the rhino cow, managing executive of KNP, Gareth Coleman, said the horrific incident has left the rangers and their colleagues traumatised “as they are doing everything they can to protect these magnificent animals and threatened species.

“Rhino sightings are a key reason why tourists visit the park and in so doing contribute to the local economy. We are appealing to members of the public to assist law enforcement agencies to bring these criminals to book,” said Coleman.

According to SANParks, the incident of the mutilated rhino occurred despite the continuous and dedicated efforts by SANParks to curb rhino poaching in the KNP through a number of focused initiatives.

“The Skukuza Regional Court recently imposed heavy sentences on those who were found guilty of rhino poaching in the KNP, which has been welcomed by SANParks.”