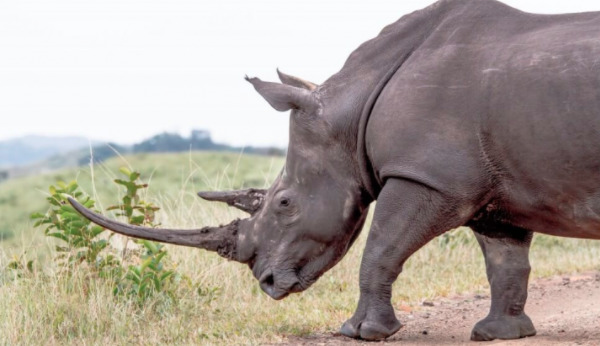 A white rhino grazes in Hluhluwe-Imfolozi Park in KZN. Photo: Hluhluwe Game Reserve, as originally published by The Citizen.)

On Tuesday, news broke that the entire Ezemvelo Wildlife Board had been suspended, and a forensic investigation was being instituted.

Economic development, tourism and environmental affairs MEC Nomusa Dube-Ncube explained in a statement that the stability of Ezemvelo had been debated since a virtual meeting on the conservation body’s annual performance plan and budget on 28 April.

“In a true sense of democracy, ever since that meeting – leaders of political parties have been speaking with one voice on the need to ensure the stability of Ezemvelo. They have been demonstrating that they represent the interest of those who elected them into office.

“Today, the chairperson of the portfolio committee presented my formal letter to the members of the committee informing them about the suspension of the board of Ezemvelo Wildlife,” she said on Tuesday.

Ezemvelo Wildlife directs biodiversity conservation management in KwaZulu-Natal. This includes more than 120 protected areas, and ecotourism facilities within these areas. Ezemvelo manages, among others, the iSimangaliso Wetland Park and Hluhluwe-Imfolozi Park, where southern white rhino and other endangered species roam.

It is a parastatal body, and receives funds from the provincial government. Around 40% of its operating budget is supplemented through its own business operations.

The chairman of the Ezemvelo Board is Dr William Mngoma.

According to Dube-Ncube, the board was suspended due to “prima facie allegations”.

The entire board was suspended in accordance with Section 12 of the KwaZulu-Natal Nature Conservation Management Act.  “As the department, we agree with lawmakers. We believe that our nature conservation is another critical avenue at our disposal as we confront the challenge created by Covid-19,” she explained.

Despite enquiries made by The Citizen since Tuesday, the department did not disclose what allegations the Board faces.

KZN Finance MEC and member of Parliament Ravi Pillay has been instructed to start a forensic investigation at Ezemvelo. Pillay will be appointing an external entity to conduct the investigation.

Until the entity is confirmed, Ezemvlo’s Acting CEO Ntsikelelo Dlulane will act as the accounting authority for the conservation body.

Chairperson of the Upper Mpushini Conservancy and Environmental Monitoring Conservancies in KZN, Edith Elliot, told The Citizen that aside from the statement released on Tuesday, there is little information on the allegations facing the Board or the progress of the investigation.

“It is unfortunate that the Ezemvelo Board is in trouble again, but I am pleased that the MEC is taking decisive action.”

Ezemvelo is no stranger to forensic investigations.

Last year, KZN Premier Sihle Zikalala commissioned an investigation into corruption at Ezemvelo, which the Democratic Alliance (DA) in the province said was “directly linked to rhino poaching”.

This after a dodgy tender deal involving a fencing contract at Hluhulwe-Imfolozi Park worth R30 million emerged. The DA in KZN’s finance and Scopa provincial legislature member Francois Rodgers confirmed he has never seen the anticipated Ezemvelo corruption report from 2019. DA KZN MPL for economic development, tourism and environmental affairs, Heinz de Boer, said that the fencing deal was investigated, a report released, and arrests were made.

De Boer lamented that Ezemvelo’s financial situation had been in the doldrums for five to 10 years. He too is in the dark about why the Board was suspended.

Wildlife and Environment Society of South Africa (Wessa) KZN chair Margaret Burger expressed concern for those at Ezemvelo who do their jobs, but suffer due to issues within the Board. Burger explained that it was devastating when the contract for Ezemvelo to patrol beaches was not renewed four years ago, as this meant an entire staff complement either being transferred or losing their jobs.

Situations such as this also result in a loss of “institutional knowledge”, which she said was essential, as Ezemvelo is the region’s “biodiversity steward”.

The department of agriculture, forestry and fisheries (Daff) failed to renew Ezemvelo’s beach patrolling contract in August 2016. This puts beaches at risk of poachers and gillnetters illegally over-fishing, with no authority to monitor them. Burger said Covid-19 has severely impacted many conservation organisations across the country, including Ezemvelo.