By NewsroomOctober 1, 2019Conservation
No Comments

It is significant that eight (Bajaj Pulsar 150 CC NEON ABS) motorcycles were handed over to the West Bengal Forest Department’s North Wildlife Circle on the day when the first meeting of the expert committee was held on reintroduction of Indian one-horned rhinoceros at Patlakhowa grassland in Cooch Behar area. 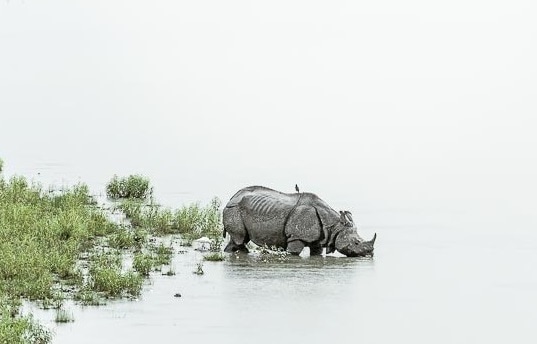 Aaranyak’s CEO, Dr Bibhab Kumar Talukdar who is also the Chair of Asian Rhino Specialist Group of the IUCN and Asia Coordinator of International Rhino Foundation, was present in the function. The motorcycles have been provided by Aaranyak with support from Born Free Foundation and in association with Himalayan Nature and Adventure Foundation.

The West Bengal Forest Department have decided to reintroduce rhinos at Patlakhowa grassland where the erstwhile habitat was destroyed because of change of course by River Torsa, keeping in tune with its principle of not keeping all the eggs in one basket.

The Forest Department wants to spread out the rhino population in North Bengal to secure the future of the species. Local communities have been consulted before taking the decision to translocate rhinos to Patlakhowa from neighbouring protected areas of Jaldapara and Gorumara sanctuaries.

About five to six rhinos are being translocated to rejuvenated grassland at Patlakhowa where the rhino used to stroll till about 60 years back. The Forest Department has already mapped the area and is constructing protection fence to create an enclosure for the translocated rhinos at Patlakhowa.

Patlakhowa is being developed as an ‘extension colony’ of the rhinoceros in North Bengal areas of West Bengal where rhino population has shown a steady growth during the last three decades. According to reports, there were 14 rhinos in Jaldapara in 1988. As per Rhino Census report published by West Bengal Forest Dept 2019, in Jaldapara there are at least 231 individuals while in Gorumara, Chapramari area have 52 rhinos. There are minimum 283 rhinos and maximum 289 rhinos.