Information minister Stanley Simataa, during a media briefing on resolutions from the second Cabinet meeting yesterday, said Cabinet has endorsed a campaign to promote conservation hunting and its benefits to local communities and the broader environment.

The minister said Cabinet has taken note of the increasing international pressure against trophy hunting and endorsed a campaign to promote conservation hunting and its benefits to local communities and the broader environment.

Trophy hunting or sport hunting refers to the hunting of wild game for human recreation. Generally, only parts of the animal are kept as trophies – usually the head, skin, horns or antlers – and the carcass itself set aside as food. 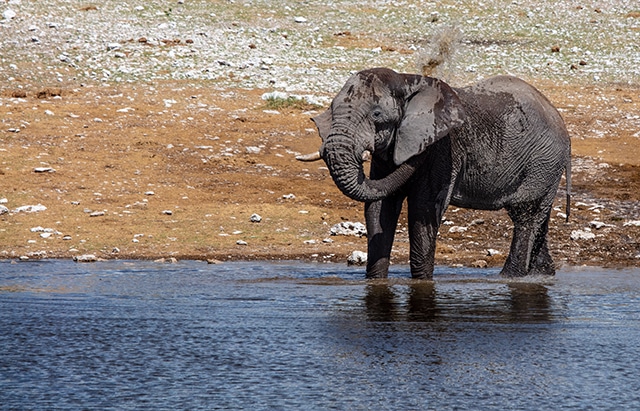 Original photo as published by The Namibian: An elephant at Etosha National Park. (Photo by Alan J. Hendry via Unsplash)

Simataa said with the conservation measures, the country has introduced in compliance with the Constitution, wildlife is plenty in communal areas.

The minister said the impact of a ban on trophy hunting would negatively affect this sector, which employs 15,000 people and sustains itself from hunting.

“People have now embraced that wildlife is part of our ecosystem and that we should conserve and manage it because we are getting utility out of this. Imagine if this stopped, the loss in revenue, the unemployment that will come and the impairment that will be there in terms of our efforts to address poverty,” he said.

The minister added that banning trophy hunting would mean the country would continue to be a nation extending ‘begging bowls’ to the international community, which would create dependency because that is revenue that Namibia would be denied to use.

“We do not want to be a nation that has begging bowls in its hands; we need money to be a truly independent nation to take care of its citizens,” he said.

“You cannot deny a nation the opportunity [to use] its God-given resources in the way that it has set for itself. It is like denying those that have oil an opportunity to access it,” he added.

Cabinet also supported the environment ministry in its quest to counter international pressure against trophy hunting and directed the Ministry of International Relations and Cooperation to circulate information on the ‘strategy on conservation hunting in Namibia’ to Namibian missions abroad to sustain the campaign.

The environment ministry was also directed to engage and form partnerships with other Southern African Development Community countries to counteract international pressure against trophy hunting.

Also speaking on the matter, environment ministry spokesperson Romeo Muyunda said it was unfortunate that pressure to ban trophy hunting was coming from the international community, adding that he believed that this was due to lack of understanding of the contributions trophy hunting made in the country, such as employment creation, especially for people in rural areas.

Muyunda noted that if these benefits are removed, these people would not tolerate wildlife and, at the end of the day, the international community itself would have nothing to speak about because the country would no longer have any wildlife.

He added that the danger would be that most of these species would be wiped out through poaching, while the ministry was already seeing such elements of poaching on wildlife, especially on highly valued species.

“So, imagine if somebody has to endure living with an elephant that is causing destruction and also threatening people’s lives without benefiting from that elephant,” he said.

Cabinet also noted the progress, development and challenges experienced in the implementation of various drought relief interventions submitted by the office of the Prime Minister.

Simataa said due to the improved grazing conditions in the Zambezi, Kavango East and West, Ohangwena, Oshikoto, Oshana and Omusati regions, Cabinet approved the discontinuation of the distribution of free fodder to those regions.

In addition, Cabinet also noted that the distribution of fodder to Otjozondjupa, Kunene, Erongo, Khomas, Omaheke, Hardap and //Kharas regions would continue due to low rainfall.

The minister said some parts of the country have reported rising water levels and a decision was taken to support and assist the communities by deploying canoes and life-saving jackets. Meanwhile, water bowser services in some regions have been discontinued and cabinet supported the continued implementation of programmes to build resilience, which include water provision and the fodder production capacity for farmers and green schemes.

Cabinet noted that all other approved interventions on drought would be continued until the end of the declared state of emergency period of March 2020.

Cabinet further supported the Office of the Prime Minister in the extension of the introduction of appropriate information management systems, which would be used in the identification and registration of beneficiaries, as well as in the redemption of benefits, with the support of the World Food Programme. Cabinet also supported the strengthening of the disaster risk management and response systems with the introduction of appropriate tools and equipment, as part of resilience building.