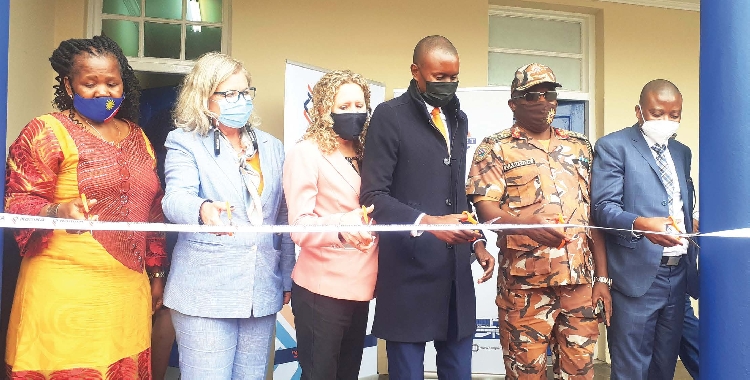 The delegation set to open the programme. Image: As originally published by The Namibian.

The programme, which was launched by the Namibia Revenue Agency (NamRA), focuses on the interception of illicit trafficking including wildlife, drugs, arms, strategic dual goods and other illicit items.

It is an initiative of the United Nations Office on Drugs and Crime and the World Customs Organisation, and will be jointly administered by officials from NamRA, the Namibian Ports Authority (Namport), the Ministry of Environment, Forestry and Tourism, and the Namibian Police.

Deputy minister of finance Maureen Hinda-Mbuende officiated at the event.

“The programme is yet another milestone in the implementation of the customs modernisation programme and strengthening compliance with trade facilitation requirements at our ports of entry, and realising our vision in being a world-class logistics hub, and yet a leader in combating drug trafficking. This unit will afford us, as a country, an opportunity to reform and secure not only our trading environment, but also the entire trade facilitation spectrum,” she said.

She applauded all partners for working hard to make the unit a reality, despite challenges and limitations of the Covid-19 pandemic.

“Governments across the globe continue to implement lockdown and border closure measures to contain the spread of the pandemic. This has resulted in logistical constraints, slowed business and trade activities, and has resulted in a reduction in

cross-border trade and the movement of people, and in some cases halted production. We must remain vigilant and adopt strategies that ensure operational continuity and resilience as we continue to facilitate trade and secure the supply chain, especially for essential commodities,” she said.

“Illicit trafficking is a global problem. One of my top priorities is to increase US-Namibia trade and investment to create prosperity for both countries. Namibia is the first African country to export beef to the US, followed by exports of Windhoek Lager and acacia wood charcoal. This initiative is a blow to criminals who would try to use Walvis Bay as a smuggling route,” she said.

European Union ambassador to Namibia Sinikka Antila said the launch of the programme demonstrates Namibia’s leadership and commitment in becoming a logistics hub in southern Africa.

“Due to its geographical position and riches in biodiversity, Namibia is a key player in the fight against this transnational organised crime, in particular related to wildlife and forest products. I commend the commitment from Namibia to step up their anti-trafficking efforts, in particular the leadership of NamRA for the coordination of this multi-agency initiative with its partners,” she said.

Namibia has been severely affected both as a source and transit for wildlife and forest products trafficking. In 2017, an estimated 250 to 300 containers of raw timber (logs) left the port of Walvis Bay for China monthly. Most of the logs were harvested in south-eastern Angola, Zambia and the Democratic Republic of the Congo – countries that have banned the export of raw logs. Illegal trade of pangolins, one of the world’s most trafficked animals, has also been identified in Namibia.