The National Trust has replaced a collection of tiger, lion and leopard skins at one of its historic houses with an anti-poaching art installation to highlight the “uncomfortable” issue of trophy hunting.

The skins have for years greeted visitors on arrival at Nunnington Hall in North Yorkshire. They were shot in the 1920s by the home’s former owner, Colonel Ronald D’Arcy Fife, while he served with the Yorkshire Regiment in Africa and India.

However, the Trust has invited a contemporary artist to install works at Nunnington “in response” to the trophies. The exhibition is entitled ‘Change in Attitudes’. 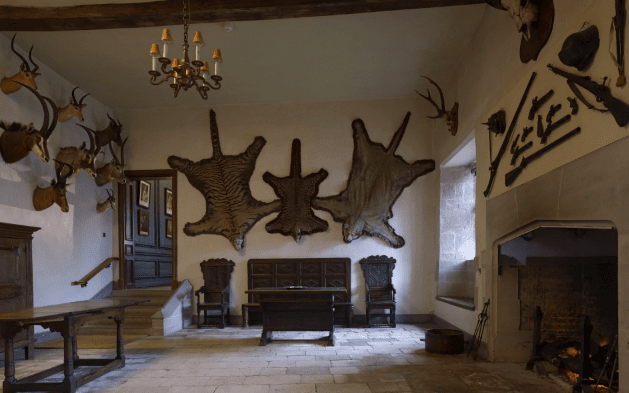 In place of the animal skins, which have been removed for cleaning and repair, there will be a display of 5,000 tiny porcelain sculptures in the shape of rhinoceros horns.

They represent the 5,000 black rhinos left in the wild. Visitors are invited to take one home free of charge, but face a moral dilemma designed to make them consider animal conservation and the earth’s dwindling resources.

A message on the wall reads: “You are being presented with a choice – take a trophy for yourself, knowing that everybody who makes the choice leaves less for others to experience, or experience the installation and leave it complete for all who follow you.”

The artist, Layla Khoo, took inspiration from a black rhino horn once kept in Colonel Fife’s collection but no longer on display.

Other works in the house include wall-mounted panels featuring real lion, tiger and rhino prints, taken from the animal enclosures at the nearby Flamingo Land zoo.

John Oma-Ormstein, the National Trust’s director of culture and engagement, said: “There are plenty of objects in National Trust houses that can feel out of place and uncomfortable, even shocking, to today’s visitors.

“We want to take a thoughtful look at what these objects mean to people today, and creative works by contemporary artists are a particularly effective way of exploring such collections and the challenges they raise.”

Jonathan Wallis, Nunnington’s curator, said: “Layla’s installations provide a powerful reminder of the devastating effect of big game hunting on many, now endangered, species and the conservation issues we are tackling today.

“When he took up big game hunting, Colonel Fife is unlikely to have considered such issues. Attitudes to this type of hunting were very different in his day.

“We don’t condone his actions or collecting such trophies but by displaying his collection uncensored, we can enable visitors to consider its effects even though big game trophies can be difficult for people to view now.”

Colonel Fife was educated at Sandhurst and joined the Yorkshire Regiment of Green Howards in 1887. He served in Alexandria, Burma and India, where he indulged his passion for big game hunting.

During the Second World War, he joined the Nunnington Home Guard as a private at the age of 72. His commanding officer was his gamekeeper, and the air raid precautions warden was the local rector.

Colonel Fife’s wife, Margaret, inherited Nunnington Hall in 1920 from her uncle, Henry. The couple met at a country house shooting party in Cheshire. He died in 1946; Margaret bequeathed the house to the National Trust upon her death in 1952.