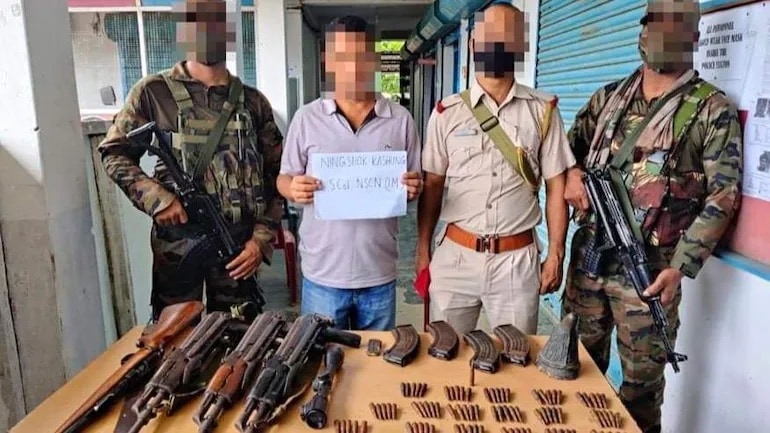 The value of the recovered rhino horn is estimated to be Rs 1 crore in the international market. Image: As originally published by India Today.

Some militant groups in the North-Eastern region have links with rhino poaching and illegal rhino horn trades. It has once again come to light after security forces arrested a militant of the Isak-Muivah faction of the National Socialist Council of Nagaland or NSCN (IM) with a rhino horn in Nagaland.

Security forces had arrested a militant of NSCN (IM) at Seitheke Basti in Nagaland’s Dimapur district.

Based on specific information, troops of the army and Nagaland police had jointly launched an operation in the area and arrested the NSCN (IM) militant and recovered one rhino horn, three AK-47 rifles with four magazines, one point 22 rifles with magazine, 87 rounds of live ammunition in possession from him.

A police official of the Dimapur district said that the value of the recovered rhino horn is estimated at Rs 1 crore in the international market.

Dr Numal Momin, Assam Legislative Assembly Deputy Speaker and local MLA of Bokajan constituency nearby Dimapur, said that a few days back police had arrested one mastermind of the rhino poacher gang from Manipur and there is clear evidence that there is a nexus between rhino poachers, rhino horn smugglers, and extremist groups.

“It is a serious issue, because if insurgency groups are involved in rhino poaching, then it will be a serious threat for the wild animals. So, we are taking the matter very seriously. One NSCN insurgent was also arrested with rhino horn. Several rhino poachers were arrested from Manipur earlier also. But these arrests have given some more evidences that some insurgency groups are involved in rhino poaching, rhino horn trade. We will take measures according to the law,” Dr Numal Momin said.

Assam’s Golaghat district Superintendent of Police Dr Robin Kumar told India Today TV that a police team of Churachandpur district had arrested the rhino poacher identified as 35-year-old Gouchin V Khamkhopau on Monday and later handed him over to the Assam police.

“The arrested rhino poacher is also a member of a militant group named Zomi Revolutionary Army (ZRA). The poacher was arrested in connection with a case registered at Bokakhat police station,” Dr Robin Kumar said.

According to the Assam state Forest department, poachers have killed at least 33 one-horned rhinos in Kaziranga National Park in the past five years.