By NewsroomApril 19, 2021Communities, Conservation
No Comments 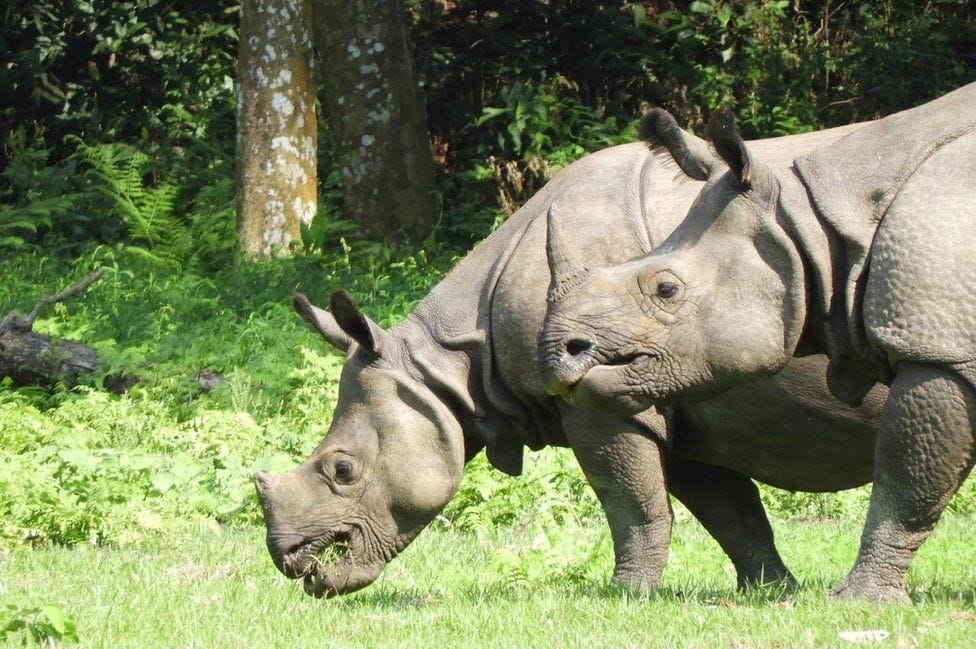 The number of one-horned rhinos in Nepal’s wildlife sanctuaries has increased by more than a hundred, marking a positive milestone in the Himalayan nation’s conservation efforts.

According to the results of the latest census, Nepal’s rhino population has risen to 752, from 645 in 2015.

Nepal is among only a few countries where greater one-horned rhinos are found. The animal was close to extinction in the last century, and its revival in Nepal and India is regarded as one of the greatest conservation success stories in Asia.

“We are very excited by the rhino survey’s findings. After the tigers, now the rhino population has also gone up,” Haribhadra Acharya, a senior official at the Department of National Parks and Wildlife Conservation, told the BBC.

Of the total number of rhinos, more than 90% live in the Chitwan National Park, which is also home to tigers, elephants, leopards and Gangetic gharials (fish-eating crocodiles).

Following the population increase in recent decades, the rhino’s status has improved from endangered to vulnerable.

Nepali officials said the coronavirus pandemic had helped the animals and their habitat in some ways, as lockdowns gave the rhinos chance to roam freely without tourists following them.

On the other hand, poachers have also exploited the situation by killing four rhinos in the past year.

The rhino census was due to be conducted in 2020 but was postponed due to the pandemic. The counting is held once every five years to monitor their status in the wild.

Around 350 experts and forest department officials travelled deep into the forest for about three weeks to tally the rhinos based on a visual headcount.

The estimates are based on unique identifying features like sex, size, horn, ear shapes and skin folds.

The census certainly wasn’t without its difficulties. The rhino counters ride domesticated elephants to traverse Chitwan National Park, which covers a vast 950 sq km (367 sq mile) area and has very limited roads. Several of the team in Chitwan were injured when a rogue wild elephant pursued and attacked their animals, causing them to panic and run amok.

Then a few days later at the Bardiya sanctuary, a smaller habitat about 400km (248 miles) west, a tiger killed an elephant trainer who was gathering fodder for the animal at the end of the day’s survey.

But despite the hardships, the count was concluded.

While the rise in rhino numbers gives something to celebrate, experts note the picture is still fragile.

“From a biological point of view, the percentage of growth of rhinos has decreased in the last six years if you compare it with the previous census period” said rhino biologist Naresh Subedi, the spokesperson for the National Trust for Nature Conservation.

The annual rhino population growth between 2011 and 2015 was 5%. But the latest survey shows the figure has dropped to around 3%.

Experts attribute this mainly to an unprecedented increase in the number of deaths due to natural causes – like old age, territorial fights, drowning during flooding and disease. Around 160 rhinos have died since 2015. Some rhinos were even swept from Nepal to India by flooding in recent years.

Nepal has worked hard to limit the impact of war and human migration on its precious conservation projects.

Once the country was home to a thousand rhinos, but due to political unrest and mass settlement of people around the Chitwan National Park in the 1950s and 60s, their numbers dwindled. Poaching, deforestation and encroachment of habitat led to their decline.

A decade later, the numbers fell to less than a hundred, triggering alarm.

The rhino population started to rise following strict anti-poaching measures and protection of forest areas in the subsequent decades.

But the 10-year civil war between Nepal’s security forces and local Maoist rebels that ended in 2006 had a devastating impact on the wildlife. Poachers exploited the unrest and killed hundreds of animals for their horns.

The World Wide Fund for Nature (WWF) says the rhinos are hunted because their horn is used in traditional East Asian medicines – though there is no scientific proof of its medicinal value.

“We didn’t have enough manpower to safeguard the forest and the poachers also had more advanced weapons. Once the civil war ended, we adopted a multi-pronged strategy to curb poaching,” Ananath Baral, the chief conservation officer at Chitwan Park told the BBC.

The government deployed hundreds of Nepali soldiers inside the parks, and local communities were enlisted to disrupt the poaching network. Police also launched a drive against those involved in illegal wildlife trafficking.

As rhino numbers increased, tourism also picked up – creating valuable income. The authorities said they had invested up to 40% of the revenue from the park in development projects in nearby villages.

Then the wildlife department wanted to create a viable rhino population in other parks. From the mid-1980s, they moved more than 80 rhinos from Chitwan Park to the Bardiya sanctuary, but numbers there fell drastically – mainly due to poaching.

Beyond Chitwan, other sanctuaries have not been so successful in increasing their rhino populations.

According to the latest census, Bardiya is now home to 38 rhinos. Shuklaphanta National Park has 17, and Parsa Park has only three.

While the increasing rhino population is a positive conservation story, concerns remain over how to maintain their numbers in limited forest areas.

“It is going to be a huge challenge,” Gana Gurung, country representative of the WWF for Nepal told the BBC. “Both tigers and rhinos need vast areas to roam around as their populations increase. They come to the edge of the park resulting in human-animal conflict.”

Sometimes rhinos get injured in the illegal electric fences set up by farmers to prevent other wild animals like boars and elephants from destroying their crops.

In areas surrounding the Bardiya Park, 10 people have been killed by tigers in the past year, triggering panic among villagers. Sometimes tigers get hit by speeding vehicles on the highways around the sanctuary.

The increase in the rhino and tiger populations is a phenomenal achievement for a poor country like Nepal, but experts say pro-active management is required to maintain its conservation success.

Rhino biologist Mr Subedi suggests that more compensation and crop insurance could be offered to villagers living near the parks.

“If the rhino population goes beyond the carrying capacity of our parks, we can think about donating some of them to countries like India that wants to revive them in some of the sanctuaries. The private sector can also establish wildlife parks like in Africa,” said Mr Subedi.