By NewsroomSeptember 12, 2019Conservation
No Comments

KATHMANDU, NEPAL: Nepal’s government plans to conduct a census of greater one-horned rhinos (Rhinoceros unicornis) in March 2020, a year after postponing the count due to lack of funds.

The count will be funded by the government, unlike previous years when authorities relied on donors to fund the census, which is expected to cost around 16 million rupees ($140,000).

The Department of National Parks and Wildlife Conservation lobbied for the government to allocate money for the count after it failed to raise the funds necessary to conduct a planned count earlier this year. As a result, during the recent budget speech for the new fiscal year, Finance Minister Yubraj Khatiwada announced, “A conservation action plan will be prepared, and a census of rare wildlife species and those on the verge of extinction will be carried out.” 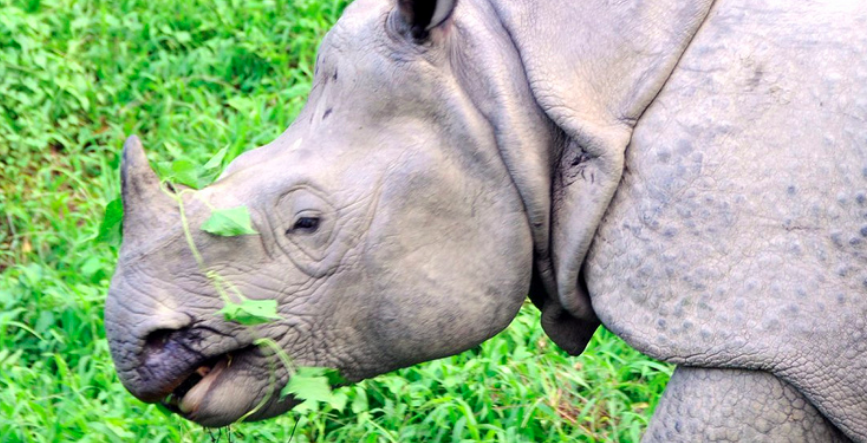 The government has allocated 11 million rupees ($96,400) for the count and will request that NGOs contribute the remaining 5 million rupees, Ram Chandra Kandel, assistant director general of the Department of National Parks and Wildlife Conservation, told Mongabay.

The government announcement comes as significant numbers of Nepal’s rhinos have been dying due to unknown or natural causes. Since mid-July 2018, 45 rhinos have been found dead in and around Chitwan National Park, the country’s main rhino sanctuary.

The deaths have prompted calls to assess whether Chitwan is hosting more rhinos than its ecosystem is able to support. Officials say the new census is important as it will provide a clear picture of the population and its habitat and an indication of the park’s carrying capacity.

Until recently, department officials relied entirely on various conservation-related NGOs to finance the census. Although Chitwan National Park brought in 290 million rupees ($2.5 million) in revenue last fiscal year, park authorities do not have control over those funds. Half of the park’s revenue is allocated to support local communities, while the other half goes into the central government’s general budget.

The planned census of Nepal’s greater one-horned rhinoceroses had to be called off last year as only 60 percent of the 10 million rupees ($87,600) necessary were raised with support from donors.

The wildlife department tries to conduct a rhino census every four to five years to take stock of the population and devise conservation strategies. The last census was conducted between April 11 and May 2, 2015, and counted 605 rhinos in Chitwan National Park, 29 in Bardia National Park, eight in Suklaphanta National Park and three in Parsa National Park.

The government’s decision to conduct the rhino census with its own money fits in with a broader trend of the government attempting to strike a populist, nationalist chord with the people. It comes as Nepali surveyors are on the verge of completing the re-measurement of Everest, another nationalist favorite.

Recent remarks by Prime Minister Khadga Prasad Sharma Oli, who came to power in 2018 riding a popular nationalist wave, suggest that the rhino count is part of this push. Despite the apparent problems in Chitwan, expectations are high, as the prime minister has already announced that the country has doubled the population of rhinos in the past decade, a feat last achieved between 1978 and 2000, when the population rose to 612 from 310.

At a meeting of the International Civil Aviation Organization in Kathmandu, Oli told participants from around the world how he felt about rhinos and Everest. “In the past ten years, we’ve doubled tigers,” he said (Nepal has indeed doubled its tiger population in the past decade). “We have similarly doubled gaidas. Do you know what gaida is? You people know gaida as rhino. But rhinos are not rhinos, they are gaida. I request you to remember this word, gaida.” The prime minister also urged the delegates to call Everest by its Nepali name, Sagarmatha.

But nationalism may not be the only reason Nepal’s government decided to self-fund the census for the first time since systematic counting began. Zoologist Mukesh Chalise, who has been actively involved in conservation for more than three decades, says that Nepali conservationists now have the experience and training necessary to manage the census. “In the past, we did not have the expertise to conduct the count, now we can do it on our own,” he says.

Chalise says he was skeptical about donors funding the census: “When donors finance the census, they want to show that the population has increased and this raises questions about the whole counting process.” That is why it is important for the government funded the census, he says. But members of the conservation community also point their fingers at government officials who fear any reduction in numbers would make them look bad.

When field work for the count is completed in April next year, officials are certain to work under pressure to make the number public.