Net-zero carbon, key to saving our world, or just a big con?

By Peter BorchertAugust 4, 2021Editorial
No Comments 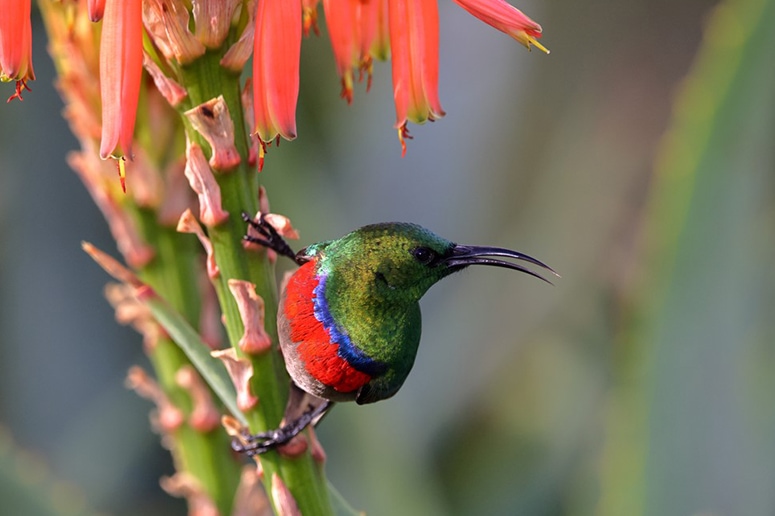 The palliative effect of natural beauty is undeniable. This morning I was distracted by the distinctive, high-pitched chee-chee call of a Southern Double-collared Sunbird and rose from my desk to track it down. It is a common resident in Cape Town gardens, so I wasn’t as excited by its presence as if it had been a rarer visitor. Nevertheless, it is a pretty creature, and my soul did a happy little jig when I spotted its iridescent form flitting industriously in the foliage and with a band of scarlet set like a giant ruby on its breast. Then my gaze drifted upwards to something altogether on a grander scale of things—the great grey cliffs of Table Mountain’s Eastern Buttress rising crystal clear in the early morning sun, close enough almost to touch. What a joyous sight. And, for a moment, all seemed well in the world.

Sadly, it was just for a moment, and soon I was back at my desk, a cup of tea at my side and grappling with a different world, most of it pretty awful to be honest. Ferocious wildfires are banding much of the northern hemisphere in flames and smoke. Floods washing away homes and lives are devastating parts of Europe and China. Here in South Africa, we’re still feeling wobbly after an attempted coup. Then there are melting icecaps, while ghastly warfare destroys people in Africa’s Horn and so many other places, not only in Africa. And, of course, Covid-19 remains ever-present.

And to this litany of woes, all exacerbated if not entirely caused by the havoc we are wreaking on the planet by our numbers and actions, comes a phrase that increasingly visits me with foreboding—net-zero carbon. Is this really the invention of the century that is going to solve all our climate-related crimes, put orangutans back on the map, make the oceans a happy place for sharks and whales, reduce poverty and champion a more equitable distribution of resources, give us all clean air to breathe, and an entrée to a new world in which we all live a little more happily ever after?

You might think so, judging by global media at the moment. Everyone is talking about reaching it, even Joe Biden. On day one of his presidency, he fulfilled his promise to rejoin the Paris Agreement and set a fresh course for the great ship of the United States: to tackle the climate crisis at home and abroad, “reaching net-zero emissions economy-wide by no later than 2050.” Furthermore, leading global brands—Microsoft, Siemens, Amazon, Phillips, and Unilever, to name a few— have signed the Climate Pledge, which calls on all companies and organizations to be net-zero carbon by 2040.

And so, “net zero”—yes, our new buzz-phrase has already been streamlined to two words—has surged into prominence. But what exactly does it mean? Why does it matter? And why do I feel so disquieted by its building momentum?

Delloite has a convenient summing up of the concept and why it is so important. “Essentially, we reach net zero when the amount of carbon dioxide we add [into the atmosphere] is no more than the amount taken away.” And it matters because escalating atmospheric carbon, caused by our fossil-fuel-linked lifestyles over the past 200-odd years, is making our planet hotter, and our climate much more unstable than it ought to be. And it is leading us towards an environment that is already becoming increasingly less comfortable for us and other creatures and plants to live in. The evidence is irrefutable, the science warns.

So, we need to do something about it to avoid the more catastrophic aspects of global warming. And quickly. The U.S. Energy Information Administration (EIA) has said it expects global carbon dioxide emissions from energy-related sources to continue to grow in the coming decades, with global energy-related CO2 emissions set to continue rising by 0.6 percent a year through to 2050.

Our politicians and business leaders seem, finally, to be getting the message that with great purpose and urgency, we must transition to a low-carbon society. But should we feel any confidence in this? After all, acknowledging that we have to do something about our dodgy lifestyles is hardly new.

Remember the fanfare with which the Kyoto Protocol came into force in 2005. It required developed countries to reduce emissions by an average of five percent below 1990 levels. But developing countries, which included the massive carbon emitters of China and India, were not compelled to take action. Furthermore, the United States withdrew its support, and the whole thing became a fiasco.

And then came the Paris Agreement, adopted by 196 countries in December 2015. The goal: to limit global warming to well below two degrees Celsius, better still to 1.5 degrees Celsius, compared to pre-industrial levels. It was a landmark event, compelling all nations to achieve a climate-neutral world by mid-century. A noble aim that during the Trump administration was badly ruptured when the U.S. opted out of the agreement.

Nevertheless, the meeting in Paris changed the paradigm of climate diplomacy. As Todd Stern of the Brookings Institution and President Obama’s chief negotiator in Paris commented: “It is a legal hybrid, blending binding elements of accountability with non-binding emissions targets. In critical ways, it bets on the force of rising norms and expectations rather than law to achieve its aims. For Paris to succeed in the end, this is the bet that will need to pay off.” It seems rather scary when the most significant political attempt to curb runaway global warming is framed as a wager.

The focus is now on the “Paris Rule Book” for emission accounting, reporting, and review—a key step for turning Paris into a lasting and effective legacy. However, the writing of the rule book doesn’t seem to be going all that smoothly as there remain “a few unresolved issues.”

So, can net-zero do the trick? Can it really be the flag behind which the world can rally and get the job done? Colm Sweeney of NOAA’s Global Monitoring Laboratory adds a cautionary note. “If we want to mitigate the worst impacts,” he says, “it’s going to take a deliberate focus on reducing fossil fuels emissions to near zero — and even then, we’ll need to look for ways to further remove greenhouse gases from the atmosphere.”

This goes to the core of the disquiet I mentioned earlier. There is a growing narrative suggesting that if we achieve net-zero, we’ve succeeded. Job done. But, no, as Sweeney implies, it is only a step along the rocky road towards what has to be a carbon-free world. Net-zero, in this context, is potentially nothing more than pushing food around on a plate. And possibly that is why it is such a popular concept, yet another smoke and mirrors attempt on the part of the powerful polluter lobby to appear to be taking the high ground while carrying on with business as usual.

I then came across an article by Patti Lynn, the Executive Director of Corporate Accountability, an NGO focusing on “building a world rooted in justice where corporations answer to people, not the other way around.” She sees “significant flaws in the logic of net-zero, and if that’s what we aim for as we tackle the climate crisis, we will fail to make the changes we need to.” These flaws include an over-reliance on technology to come to the rescue, technology that is as yet untried and tested, and potentially unjust. (For instance, tree planting on a massive scale could result in land grabs that might displace and otherwise disadvantage indigenous people.) Furthermore, getting to net-zero doesn’t eliminate prospecting for fossil fuels and then wresting them from great depths.

Lynn maintains the conversation should really be about how we can move to an economy that does not rely on fossil fuels at all and “is rooted in racial, gender, and economic justice.”

Scientists who would tend to agree with her include the authors of an article in The Conversation who see the concept of net-zero as a “dangerous trap.” While acknowledging that net-zero is a great idea, in principle, they say that “unfortunately, in practice, it helps perpetuate a belief in technological salvation and diminishes the sense of urgency surrounding the need to curb emissions now.

“We have arrived at the painful realization that the idea of net-zero has licensed a recklessly cavalier ‘burn now, pay later’ approach, which has seen carbon emissions continue to soar. It has also hastened the destruction of the natural world by increasing deforestation today, and greatly increases the risk of further devastation in the future.”

The urgent need to deal with climate change is unquestioned, but is the net-zero route just a big con? It’s all a bit much to take in, and I think tomorrow I’m going to need another anodyne moment of bird watching and mountain gazing to restore my equilibrium.