By NewsroomSeptember 6, 2021Science and technology, Wildlife Trade
No Comments 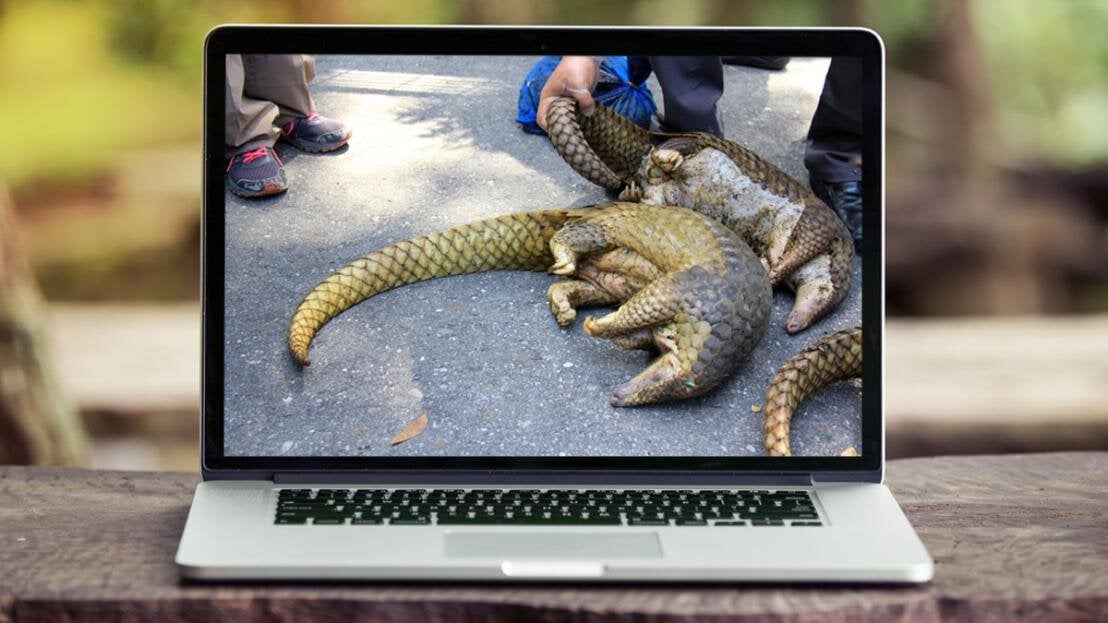 Pangolins, also known as scaly anteaters, are currently the most trafficked mammal species. Image: As originally published by Phys.org.

As governments around the world turned to lockdowns and travel restrictions to prevent the spread of the COVID-19 virus, smugglers used social media to find new ways to connect with potential customers.

Criminals can be resourceful and unrelenting in their efforts to find a way around obstacles. Wildlife traffickers are no exception. Today’s trade in wildlife and wildlife products has shifted from physical markets to online marketplaces where traffickers apply e-commerce business models and use encrypted messages in an attempt to evade detection by law enforcement.

While the move towards online platforms started several years before the COVID-19 pandemic, the restrictions imposed to contain the virus accelerated this digital transformation. According to Interpol, traffickers are advertising and selling wildlife and wildlife products via social media platforms. Gaining access to a vast international marketplace and following the same routes as other crimes such as drugs and weapons smuggling, wildlife crime is rising 5 percent to 7 percent annually, two to three times the growth rate of the global economy.

“The information available to investigate the illegal trade in wildlife is often incomplete or missing. As such, we can’t get the full picture,” said Enrico Di Minin, associate professor of conservation geography at the University of Helsinki in Finland where he leads the Helsinki Lab of Interdisciplinary Conservation Science. “Since 2015, when the illegal trade in wildlife began moving increasingly onto digital markets, I started investigating the wildlife trade from digital platforms.”

This is how the concept for the WILDTRADE project came about—to quantify the global patterns and trends of the illegal wildlife trade and to investigate how market forces shape them. The idea is to use big data mined from social media platforms in combination with machine learning methods and data gathered from online surveys and literature reviews to identify what species and wildlife products are traded online and what are the motives behind the trade. The findings will also help Di Minin and his research team identify global hotspots and the global flow of goods.

“The innovation of using machine learning methods is that we are able to automatically identify data from many digital platforms and for many species and products at the same time without needing to manually go through this content,” said Di Minin, who will address the IUCN World Conservation Congress in Marseille, France, on 5 September.

Data collection complies with data privacy and protection regulations so it can no longer be attributed to a specific person.

Di Minin’s cross-disciplinary team of expert computer scientists and social scientists sift through the flood of data using machine learning algorithms. “By filtering and analyzing the data, we can provide new insights into the hotspots of the trade, the quantities traded and the prices. These are aspects that are still poorly known at the global level,” said Di Minin. “We’re also particularly interested in learning how rarity—how rare a species is on the market or in the wild—affects the preferences of people who use these products.

One of the areas where researchers are focusing their attention is Southeast Asia. “In a recent study we investigated the online market for songbirds in Indonesia, where keeping pet songbirds has strong cultural traditions. We found that the online trade was not limited to major cities but spread throughout the country. We also found that prices on online marketplaces were significantly higher than the prices stated in consumer surveys,” Di Minin explained.

Framing the illegal wildlife trade as a global security threat

Examining online data can tell a far wider story than the impact on wildlife, revealing the complex reasons why people get drawn into poaching and trafficking, such as poverty and poor governance. It also highlights the different actors involved and the challenges they present including the threat to livelihoods, national security and even global stability.

One result of the idea that the illegal wildlife trade is conducted by criminals, organized crime networks and shadowy groups operating outside the law is the growing integration of conservation and security. Professor Rosaleen Duffy from the University of Sheffield coordinated the project BIOSEC, which highlighted possible harm to wildlife and people by casting the trade as a crime and security issue. She warns that this approach can obscure some of the underlying drivers of the illegal wildlife trade, such as demand from the world’s wealthiest communities.

“It is important to address why some people continue to engage in illegal hunting,” said Prof. Duffy. “It may be because they have no alternative opportunities or because they do not recognize the legitimacy of colonial laws that forbid access to or use of wildlife in the area. By focusing on the relationship between nature and society these omissions and blind spots are revealed–highlighting how they shape and change conservation policy.”

“After all, it’s these blind spots and omissions that eventually result in ineffective and socially unjust policymaking, which impacts both conservationists and people living with wildlife,” added Duffy.

On the ground, this means gaining a better understanding of the complexities of threats to wildlife, such as elephants, and designing effective and socially just conservation solutions. This requires a knowledge of conservation biology, development studies, international politics and economics. “For instance, our research on demand reduction for ivory used critical race theory to unpick and understand the often racist underpinnings of demand reduction campaigns by NGOs aimed at Asian ivory markets,” said Duffy. “We called for more culturally nuanced and effective campaigns which engaged positively with consumers.”