The Kruger National Park private concessions granted almost two decades ago are coming up for renewal, and the existing lodge owners are as skittish as duiker at a waterhole. The concessions have been a rare example of successful public-private partnerships. But some existing owners worry that the new regulations for the second round of concessions will be much more onerous.

Sally Kernick says business is good. The co-owner of Lukimbi Safari Lodge, situated on one of 18 private concession areas in the southern Kruger National Park, Kernick says they are doing so well that they’ve just bought a new game-drive vehicle.

Lodge concessions like Lukimbi give tourists to the park the extreme in safari exclusivity. Some offer 5-star designer fittings and charge R30,000 per night, while others may have fewer stars in a canvas tent of lesser luxury, yet boast maybe the highest concentration of carnivores on the planet.

A number of them, as with Lukimbi, are very popular.

When the first concession lodges were awarded 19 years ago, these concessions were a new phenomenon to the Kruger, and in fact any national parks in South Africa (there is one in Addo National Elephant Park and one in the Kgalakgadi Transfrontier Park). 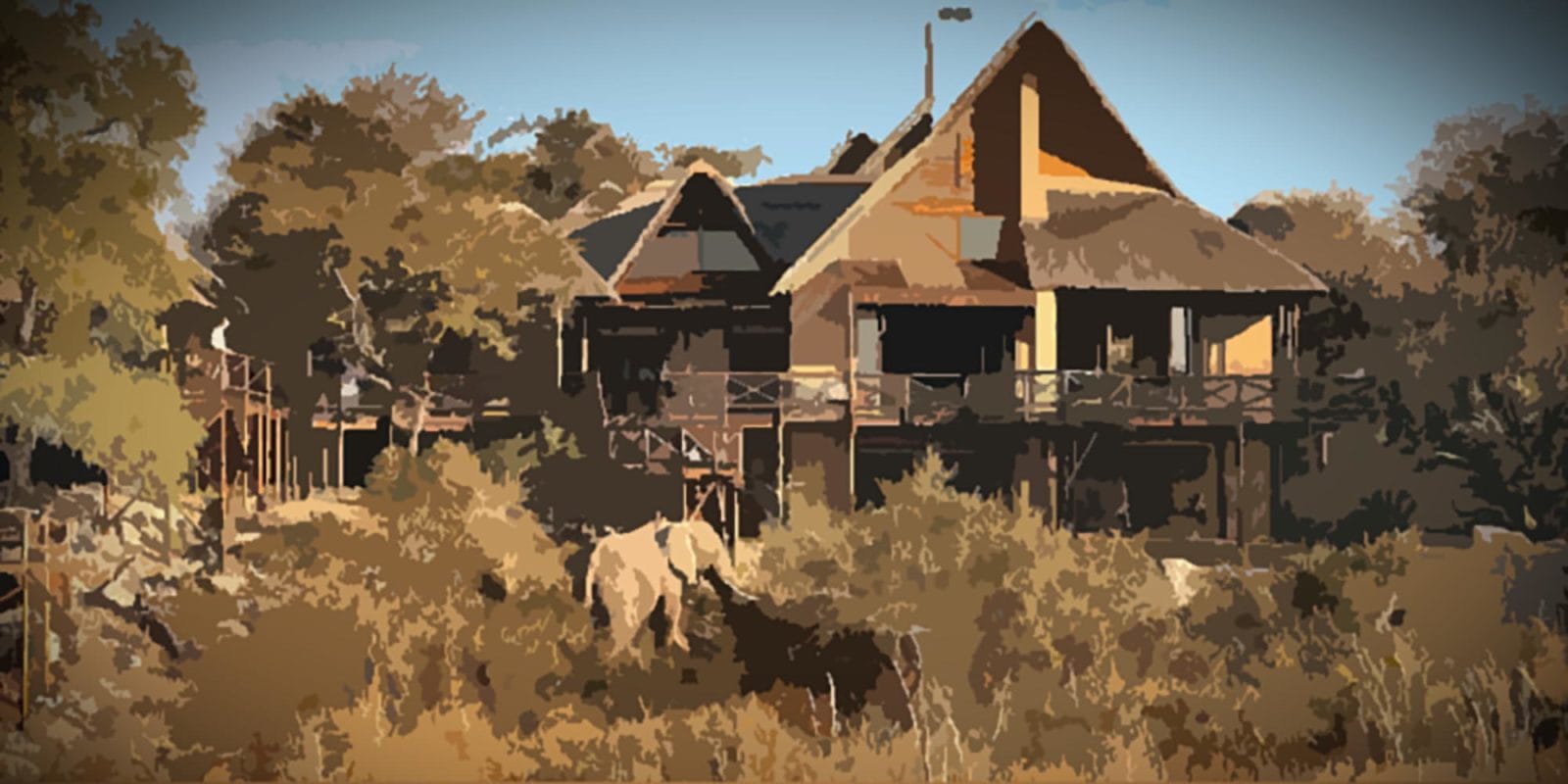 Original photo as published by the Daily Maverick: Lodge concessions like Lukimbi give tourists to the park the extreme in safari exclusivity. (Photo: https://lukimbi.com)

According to South African National Parks (SANParks) CEO at the time of the concessions’ launch, Mavuso Msimang, “The concessions were introduced to boost the income of SANParks, [and] to improve the brand” of what is affectionately known as “the Kruger”.

“The concessions have done well. Virtually all them have applied for the renewal of their leases”, says Msimang, relating that he knows of “at least two” that boast occupancy of around 80%.

The concession model has worked “extremely well”, echoes Kernick and a number of other lodge concessionaires in the Kruger. So well in fact, that a couple of leaseholders’ noses are beginning to twitch, mostly about the future of the 20-year leases referred to by Msimang.

Over the next four years, the 18 Kruger lodge concession leases are up for renewal, starting with the first concession granted – Jock Safari Lodge (opened in 2000) in the south-west of the park, renowned for significant leopard and wild dog activity – in just under two years.

This veteran of the lodge industry says that in three years, despite the considerable sum spent on marketing their product and earning a reputation, they have no idea if their lease of the past 20 years will be renewed.

“Of course, we’re very concerned, we don’t know what the future is,” she says.

Not about rhino poaching, which has hit the southern Kruger hard, nor the development of the large franchise hotel at the nearby Malelane Gate she feared some seven years ago. She says she’s worried about Lukimbi’s future, the product they worked so hard to build.

“They [SANParks] don’t tell us [when we will see the lease renewal conditions]. It’s very difficult for business. We can’t plan, we don’t even know if we’ll be allowed to tender in three years.”

Jock Safari Lodge general manager Louis Strauss, in contrast, says he is not concerned, stressing that he knows exactly what is expected, saying concessionaires are kept in the loop at “the SANParks concession information sessions’.

“I have trust in SANParks, with whom we have a good working relationship. I believe the tender process will be open and fair. They [SANParks] are not just gonna hand it to someone who doesn’t meet the requirements”.

Word on the morula savannah grapevine is that when SANParks held a public information session about a new concession area in Letaba this year, some of the attending existing concessionaires perhaps naturally assumed that the proposed conditions attached to the new Letaba concession were a sign of things to come.

The word “onerous” was uttered more than a few times by a few concessionaires describing the initial Letaba concession requirements. Among them were claims of lodges having to offer communities some equity “for free”, and some paid for.

As with a wildfire, gossip spreads rapidly around the Kruger, and it’s only logical to surmise that the lease conditions attached to the Letaba concession, albeit a work in progress, represent the current SANParks thinking on the lease renewals.

When asked for comment on the readiness of the lease renewals, SANParks’ acting head of the Tourism Division Business Development Unit, Annemi van Jaarsveld, says “for now” there’s nothing to know.

“The retendering principles will be subjected to executive management for approval as well as board approval [at the] end [of] November. Until then, we cannot engage in any discussions on these principles.”

But that won’t stop the chatter in the bush.

Far north of Lukimbi and Jock, Rhino Post concession lodge co-manager and Kruger Park veteran Nikki Meyer says she believes one of the alleged “onerous conditions”, of an eventual successful Letaba concessionaire being expected to donate 10% of equity to a community, was “revised by SANParks”.

“I would say that the [possible] changes [to the lease conditions] are at the end of the day part of the learning process. Remember, we were the first concessions, and SANParks and the concessionaires have learned a lot since then.”

With 12 years working for SANParks in the Kruger, and 12 managing a private concession, Meyer could claim to see the “big picture” in the finer details.

“The changes to the lease conditions, on the whole, relate to monitoring – these can appear, or even be, onerous, but in fact are normal business practice and in line with best practice”.

Another concessionaire has a deep respect for the SANParks Kruger management.

“They’ve got a difficult job, balancing conservation – every six months we do an enviro audit – with land claimants and financial pressures. Yet, the tender process has been well thought out, and their documents are thorough and transparent and they always explain where they’re at. And not forgetting they’re under huge pressure regarding BEE requirements.”

The role of BEE (see table below) naturally features strongly in the lease conditions, which is nothing new in South African business. Jock Safari Lodge’s Strauss says serious bidders will know that and will “do their homework”.

An existing concession-holder sent me the following descriptor of the BEE requirements.

“To measure BEE efforts and/or proposals by different lodges can be very subjective, so SANParks has used the BEE tourism scorecard as a measurement tool – it might have its faults but provides a clear structure across the industry.”

She says the intention of the scorecard is equally clear.

“To keep the scoring high it is necessary to participate in learnerships and genuine empowerment.”

The Kruger National Park, as South Africans should have come to realise by now, is after all about the interdependency of people, animals and wilderness, for it is ultimately people who will defend both, and often the people who are connected to the tourism industry.

“As the first private lodge in the park, Jock [Safari Lodge] has its own allure”, wrote an anonymous young travel scribe (rather lazily) some nine years ago.

While that will be true of most well-situated lodges, the concept of the 20-year concession lodges was not a silo project, built-in isolation simply to offer tourists a private Kruger experience. There was more to it.

SANParks has consistently been under pressure since apartheid’s demise beyond its normal conservation challenges, to justify and explain the Kruger’s existence as a custodian of wilderness and wildlife, pursuits fairly accurately regarded by the majority of the population as synonymous with white privilege.

So it is that, surrounded by a rapidly growing poor rural population of close to two million, predominantly on its western boundary, from Hazyview to Phalaborwa and Pafuri, SANParks welcomes additional sustainable revenue to the Kruger’s coffers (and opportunities for education and employment) while retaining its role as guardian of a wilderness famed throughout the world.

While former CEO Msimang notes that, “By themselves, concessions will not solve the dire socio-economic situation in areas surrounding protected areas,” the growth in revenue from lodge concessions is welcome news to a cash-strapped SANParks.

This roughly R83-million is a little under 10% of the total SANParks accommodation revenue (R718.724 million, which itself is up 10.9%) receives from its traditional public camps, (including camping).

Which demonstrates that local and foreign tourists really enjoy the product. So much so that on the private front, the lodge concessions have matured into established, profitable businesses, attractive to potential new investors and lease-holders.

That should be good news and motivation to all present and hopeful concession-holders.

“We won’t hand our business over. It’s our reputation, we’re not going to hand it over”, said one existing lessee, demonstrating the kind of confidence and determination voiced by Jock’s Louis Strauss.

A lot goes into a bid, and far more in money and time to make a lodge a success. So, maybe the money Sally Kernick spent on Lukimbi’s game-drive vehicle was money well-spent after all.