By NewsroomAugust 9, 2021Wildlife Trade
No Comments 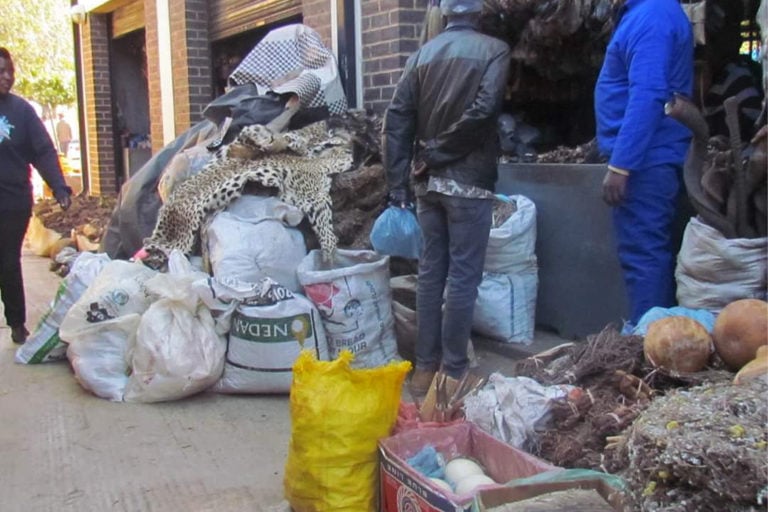 The illegal wildlife trade at Kwa-maimai market in South Africa. Image: As originally published by Mongabay

In May 2020, Shivaprakash Nagaraju, senior scientist at The Nature Conservancy in India, was working in New Delhi when he contracted COVID-19.

“I had breathing problems and other symptoms, and as a result I was isolated in my room for around two months,” he told Mongabay in a Zoom call. “And around that time there was news that COVID-19 likely originated in a wildlife market, and a lot of people were blaming the wildlife trade, so this built a curiosity in me to understand this connection.”

While experts have not yet confirmed the initial source of the novel coronavirus, it is believed to have passed from an animal to a human, a process known as zoonosis, at a major wildlife market in Wuhan, China. This suspected link has drawn intense attention to the wildlife trade — both legal and illegal — over the last 18 months.

Alone and completely separated from his family, Nagaraju began collecting literature on the wildlife trade and zoonotic viruses and analyzing it; a task that, he said, staved off depression: “Though I was infected and going through symptoms, to keep my mind thinking positive, I started collecting data. If I had not been infected, I might not have thought seriously about going deeper into this.”

As the COVID-19 pandemic continues to rage across much of the world, Nagaraju’s new research paper in Current Biology has uncovered vital information: a small minority of animal species in the wildlife trade host the vast majority of known zoonotic viruses. Nagaraju and his team found that just 26.5% of mammals in the wildlife trade host 75% of known zoonotic viruses, “a level much higher than domesticated and non-traded mammals,” they write.

Primates, ungulates, carnivores and bats present the highest risk, as these four groups alone harbor 132 of the 226 currently known zoonotic viruses, or 58% overall. However, according to the researchers, bats, rodents and marsupials pose the greatest risk in the future given expected shifts in the wildlife trade.

“I think one of the key messages we have provided is that most diseases come from just a few mammals with a lot of zoonotic spillover,” Nagaraju said. “When you blame the wildlife trade for COVID-19, you could be saying that all animals carry disease, but this shows that specific groups carry a huge proportion of zoonotic diseases.”

Trang Nguyen, founder of the Vietnamese wildlife conservation organization WildAct and an expert on the illegal wildlife trade, said data sets such as this should be used by governments to better target risks of disease transmission.

“Transporting animals will always come with the risk of zoonosis, and it’s important for countries to have a government agency that comprehensively screens legal wildlife imports for pathogens,” she told Mongabay in an email. “There must be collaboration between private industry and government officials to implement safer strategies, which include testing before transport and at the border, so that animal health certificates could accompany wildlife — similar procedures to what’s required for livestock.”

Nagaraju also argues for smarter policies built on a better understanding of exactly where zoonotic viruses may come from.

“You can try to keep these groups which actually pose a greater risk out of the wildlife trade,” he said. “The legal trade is a $300 billion industry and millions of people rely on it for their livelihood, and we need to understand that. So there is livelihood and food security associated with the wildlife trade, and complete bans aren’t a solution, but you can keep zoonotic reservoir species out of the trade.”

Given its nature, the illegal wildlife trade — which, in countries like Vietnam, consumes a wide range of mammals including pangolin, tigers, bears and civets — is much harder to monitor, a major concern for Nguyen.

“The risks associated with the illegal wildlife trade are huge,” she said. “Over the past 40 years, humans have faced some of the most severe pandemic, including HIV, SARS, avian flu, swine flu, the Ebola virus, Zika and COVID-19, all of which stemmed from trading in and consuming animals and destroying their habitat.”