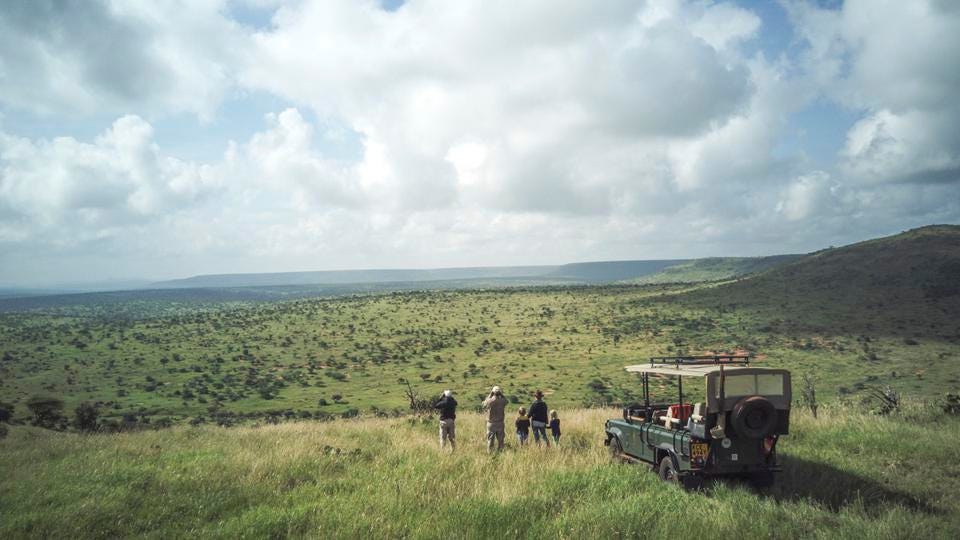 Kenya’s Laikipia region may be lesser known than the country’s famous Masai Mara, but with its striking rugged landscape and diverse range of species, it’s a must-visit safari destination. This is especially true in 2022 in the sprawling Loisaba Conservancy. It may become one of the most exciting years for the sanctuary on record as it looks likely that the black rhino will make a triumphant return. It had previously disappeared from the region due to poaching.

I spoke to Tom Silvester, CEO of Loisaba Conservancy, about how what it takes to re-introduce the rhino and what makes the region so special.

Bringing Back the Black Rhino

Black rhino were once prolific in the area which spans 57,000 acres in Northern Kenya but were poached out in the ‘70s for their horns. Loisaba has plans to re-introduce the species and currently has the approval from the Kenya Wildlife Services who are the custodians of all wildlife in Kenya. As next steps there will be an ecological assessment, environmental impact assessment, and security assessment to ensure a successful re-introduction. Also, nearly 50 kilometers of fencing will be put up to ensure the rhinos remain in the sanctuary. This combined with a highly trained anti-poaching security unit will ensure that the new population of reintroduced rhino will remain safe. “Further to that, we’re training and building our team’s capacity so that we are able to monitor the rhino once they are here,” says Silvester.

The reintroduction of the black rhino is a combined effort between The Nature Conservancy, San Diego Zoo Wildlife Alliance, Space for Giants and Elewana to develop the required infrastructure and capacity make the reintroduction happen this year. Bringing black rhino to Loisaba isn’t just a welcome addition to the sanctuary but a benefit to conservation efforts in Kenya as a whole. “Once a black rhino population reaches the ecological carrying capacity of an area, their breeding rates drop off fast,” says Silvester. “Hence the need for more rhino sanctuaries in Kenya, where successful conservation efforts means that breeding rates in existing sanctuaries slows down and more space is needed.”

While Laikipia has less total wildlife than the vast Masai Mara, there are unique animals found here —  Grevy’s zebra, reticulated giraffes and wild dogs, for example. With rolling hills and beautiful vistas, it’s also visually captivating and an adventure-lover’s paradise. “It is home to walking, mountain biking and has great access to incredible helicopter trips into Kenya’s remote and wild northern rangelands and the spectacular Lake Turkana,” says Silvester.

Sunsets in Loisaba are particularly stunning where lingering sunlight seems to touch every corner of the sprawling plains. A sundowner here is a moment you won’t forget so soon.

Elewana Loisaba Tented Camp is where you can truly soak up those aforementioned views. All rooms overlook an expansive panorama all the way to Mount Kenya. A delightful breeze flows through your expansive tented room which is well-appointed with chic Africana furniture with a modern European twist. Loisaba Tented Camp is the perfect launch point for safari both during the day or nighttime in their new fleet of custom-designed Land Rover vehicles. If you’re lucky enough to visit when the black rhino are (hopefully) re-introduced this year, highly trained guides will help you spot the newly arrived majestic animal.