By NewsroomDecember 10, 2019Anti-poaching, Conservation
No Comments

JAKARTA: The global population of the critically endangered Javan rhinoceros has increased to 72 after four new calves were spotted in the past several months.

Rhino experts have welcomed the news of a rise in the population of the Javan rhino (Rhinoceros sondaicus), a species driven close to extinction by poaching and habitat loss. The only known remaining population of Javan rhinos is now confined to a single precarious habitat in Ujung Kulon National Park on the western tip of Indonesia’s Java Island.

At the end of April this year, the estimated number of declined to 68 following the death of a juvenile male due to critical injuries believed to have been be inflicted by an older male. Since then, however, a survey using camera traps across the park has observed four new calves, officials said.

“We are excited to see new births taking place in Ujung Kulon,” CeCe Sieffert, acting executive director of the International Rhino Foundation (IRF), said in a statement. “Surpassing a population number of 70 Javan rhinos is a significant milestone.”

The Indonesian environment ministry said the new calves had different mothers, and all were spotted within the park’s borders. 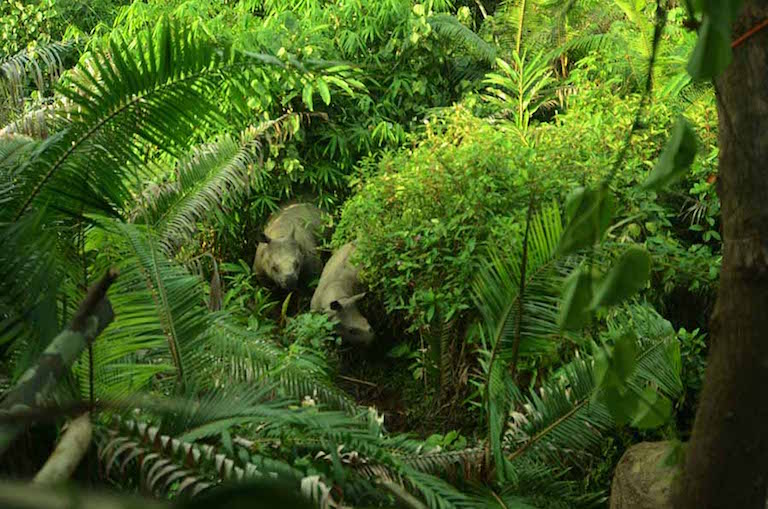 “Ujung Kulon National Park is considered safe from threats to the area so wildlife there can breed,” Indra Exploitasia, the ministry’s director of biodiversity, told Mongabay in a text message.

“There are also programs to maintain the habitat, such as clearing invasive plants that disrupt growth of vegetation that the rhinos eat,” she added.

A decade ago, the Javan rhino population was estimated at no more than 50 individuals in the park, a protected area spanning just 787 square kilometers (304 square miles) of land. (There’s also a marine protected area of 443 square kilometers, or 171 square miles.) Efforts by the Indonesian government and organizations from around the world to beef up security across the area from encroachment and poaching have been put in force for many years, and experts now say they have resulted in a stable increase in rhino numbers.

The IRF said there has been no poaching in the park in more than 20 years, and at least one new calf born every year since 2012. A new marine patrol is currently being trained and expected to start monitoring the coastline of the park in January, the group added.

“It is a testament to the commitment of government and park officials to the protection of the Javan rhino and their habitat,” Sieffert said.

Even as its population grows, however, the species remains at risk from a range of threats — from infectious disease and human activities, to natural disasters. Experts also fear Ujung Kulon is at or near its carrying capacity for the species, limiting future population growth. These factors have prompted the government and conservation groups to work together to find a suitable second habitat in which to establish a new rhino population. The plan gained urgency after a tsunami struck Ujung Kulon in December 2018. No rhinos were harmed, the disaster highlighted the precariousness of their one and only sanctuary.

Despite the urgency of the situation, the task of finding a second habitat for the rhinos has been put on hold; instead, the Indonesian government has opted to expand the usable habitat inside the park.