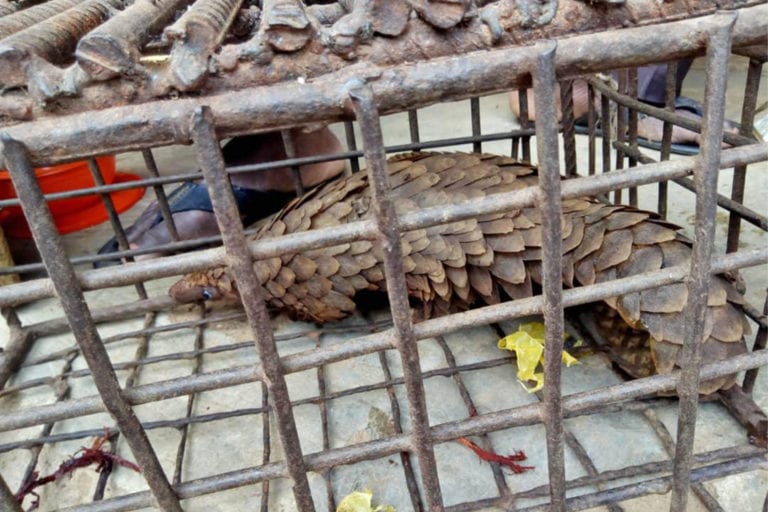 Pangolin for sale at a market in Íjẹ̀bú Ode, Nigeria: weak enforcement means pangolins are commonly hunted and sold in Nigeria, but large shipments of scales and other parts seized by customs officials are believed to come from animals killed in neighbouring countries. Image: As originally published by Mongabay.

Nigeria’s emergence as a trafficking hub for illegal wildlife appears unhindered by the coronavirus pandemic. Between 2016 and 2019, some 200 metric tons of pangolin scales were seized by law enforcement worldwide, with more than half of this total linked to Nigeria. In July, officials made the third-largest seizure of pangolin scales inside the country.

More than 7 metric tons of pangolin scales, 4.6 kilograms (10 pounds) of pangolin claws and 845 kg (1,860 lb) of elephant ivory were seized at a residential property not far from the port in the commercial capital, Lagos. Nigerian Customs Service spokesperson Joseph Attah said the NCS acted after receiving intelligence. Three foreign nationals were arrested and the customs official said the shipment did not originate from Nigeria.

The customs service says it has taken steps to address corruption and improve its effectiveness in recent years. Officers have received training on wildlife trafficking, and are now redeployed to new posts more frequently to prevent them becoming too familiar with would-be traffickers. The NCS is also shifting to accepting payments electronically, to prevent illicit payments and improve efficiency, Attah said.

The NCS has also begun working with other domestic law enforcement agencies, as well as with the customs services of other countries.

Attah said members of the World Customs Organization are encouraged to reach mutual assistance agreements. “That is an agreement that allows partner customs to provide assistance to each other by way of intelligence and whatever. To that extent, we can share intelligence with each other and that will help,” he said.

The NCS has also been working closely with the Wildlife Justice Commission, which works to combat organized crime in wildlife trafficking. Stephen Carmody, WJC’s director of programs, told Mongabay the organization was involved in the lead-up to the most recent seizure.

“We provided intelligence that they acted upon swiftly, enabling the seizure of this huge amount of wildlife products and the arrest of three suspects,” Carmody said. “This has disrupted the network and we will continue to work with the Nigerian Customs Service to ensure that those responsible for this and other major seizures will be brought to justice.  This operation demonstrates once again the value of intelligence analysis and the importance of sharing that intelligence in a timely manner.”

Carmody told Mongabay that the July seizure showed that efforts by Nigerian law enforcement were bearing fruit, but warned that the seizures did not necessarily signal a turning point in the fight against wildlife trafficking.

“What continues to be a huge intelligence gap is the sourcing of these animals and the way in which these animals are collected, the commercial-scale coordination required to harvest and process pangolins in Africa for shipments and stockpiles that are being identified and detected at this level is not fully understood,” he said.

The biggest-ever seizure of pangolin parts in Nigeria was in January 2020, when 9.5 metric tons of pangolin body parts were intercepted, also in Lagos. In January 2021, officials seized another 8.8 metric tons at the city’s Apapa port. Traffickers had falsely declared the items contained in a shipping container as furniture heading to Haiphong, Vietnam.

Despite these major seizures, there is as yet no evidence that the frequency of illegal shipments in or out of Nigeria has slowed in the last two years — not even as a result of the COVID-19 pandemic.

“If you agree that there is still COVID and also we have made our largest seizure of the items, that means the smugglers do not respect COVID,” said the NCS’s Attah. “Smugglers will take any kind of challenge as an opportunity to step up because they think that probably that period your surveillance antennas will be down.”

Olajumoke Morenikeji, a professor at the University of Ibadan and chair of the Pangolin Conservation Guild Nigeria, told Mongabay that it is essential that those caught smuggling pangolin parts are properly punished.