No selfies with animals: Why lockdown is forcing Assam Forest Dept to issue new advisories (India)

By NewsroomApril 7, 2020Conservation, Education
No Comments

These are among the many guidelines the Assam Forest Department has issued to sensitise the public about “free-ranging” wild animals that they might come across during the nationwide lockdown. On Friday, the advisory appeared in all local papers in the state, appealing the public to cooperate with the authorities. “During the current lockdown period, due to minimal human and vehicular disturbances, some wild animals may move freely into the human habitats from the nearby notified Reserved Forests and Protected Areas” said the appeal, listing out a set of Dos and Don’ts.

Wild animals venturing into human habitation is not a new phenomena — at least in Assam, in which 34.21 per cent of total geographical area lies under forest cover. In fact, Guwahati, the state’s busy capital city shares its boundary with the Amchang Wildlife Sanctuary, and a number of notified Reserve Forests.

What has changed post lockdown is the frequency of sightings and the distances the animals cover, according to forest officials here.

For example, on March 24, a rhinoceros emerged out of Pobitora Wildlife Sanctuary (PWS), travelling at least 25 km to Khetri in Sonapur. Famous for its population of one-horned rhinos, PWS is about 46 km from Guwahati. 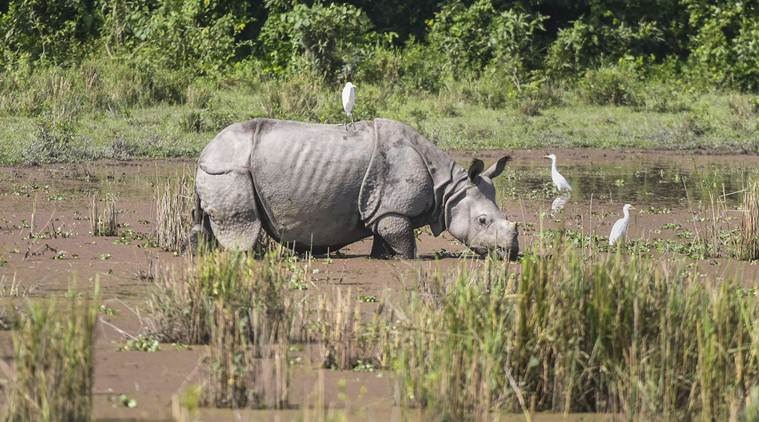 Original photo as published by Indian Express: Kaziranga: A one-horned rhinoceros seen at the Bagori Range of Kaziranga National Park in Nagaon district of Assam.

“Usually come they come to the Maloibari Pothaar, right next to Pobitora,” said Dilip Das, Range Officer, Sonapur, “This time, however, probably because of lack of villagers/sounds of cars, it reached right up to Khetri.”  The animal was located almost three days later, and put back into PWS.

MK Yadava, Additional Principal Chief Conservator of Forests (Wildlife) and Chief Wildlife Warden, Assam, said that at least four-five cases are reported every day since the lockdown was announced. “Since people might mistreat, overreact, gather together, we decided to issue this appeal,” he said. The advertisement also includes two helpline numbers to a designated Control Room, to report sightings.

Last week, in a village in Assam Jorhat district, a leopard was killed by the authorities in “self-defence” after it attacked a member of the tranquillising team and a BSF jawaan. “The fringe areas, between village and forests, are natural habitats of leopards,” said Bidyut Bartahkur, Divisional Forest Office, Jorhat.

This area, too, was a “fringe area” but Barthakur said that what led the leopard to come out was “probably the silence” in the area. In Dibrugarh’s Tingkhong, two juvenile leopards died on March 30. “It is difficult to say for sure that it was because of the lockdown — because it is common for leopards to venture into villages. However, young ten-month old leopards usually do not,” said Pradipta Baruah, Dibrugarh DFO.

Hemkanta Talukdar, Chief Conservator of Forest, Central Assam Circle said that it would be a stretch to say big animals are reclaiming human habitats, all of a sudden, post lockdown. But he mentioned a “fifty per cent decrease in anthropogenic pressure” since the lockdown came into effect. “The watch-houses in the fields, where humans would stand guard to check wild animals are empty, all of a sudden there are no sounds of vehicles from the highway, they don’t hear any movement,” he said.

Last week, a swarm of birds — Whistling Teals — were seen in Guwahati’s Dighalipukhuri area, it created a buzz on social media. “These birds are not uncommon in Guwahati — but they usually tend to gravitate towards quiet areas and deep waters,” said Baruah, “Dighalipukhuri lake is usually buzzing with human activity: pedestrians, boat rides etc. The lack of activity is probably what brought them to the lake.”

Jayaditya Purkayashta, a Guwahati-based herpetologist said that it is possible that these sightings were increasing because now people have the time to see these birds they have not seen for decades. “So whenever they see something — even if it’s a lizard in the garden — they feel it needs to be rescued,” said Purkayashta, who has long researched on the ‘urban-biodiversity’ of the city. “While there is a slight change, big animals won’t change their habitat so soon,” Purkayashta said.