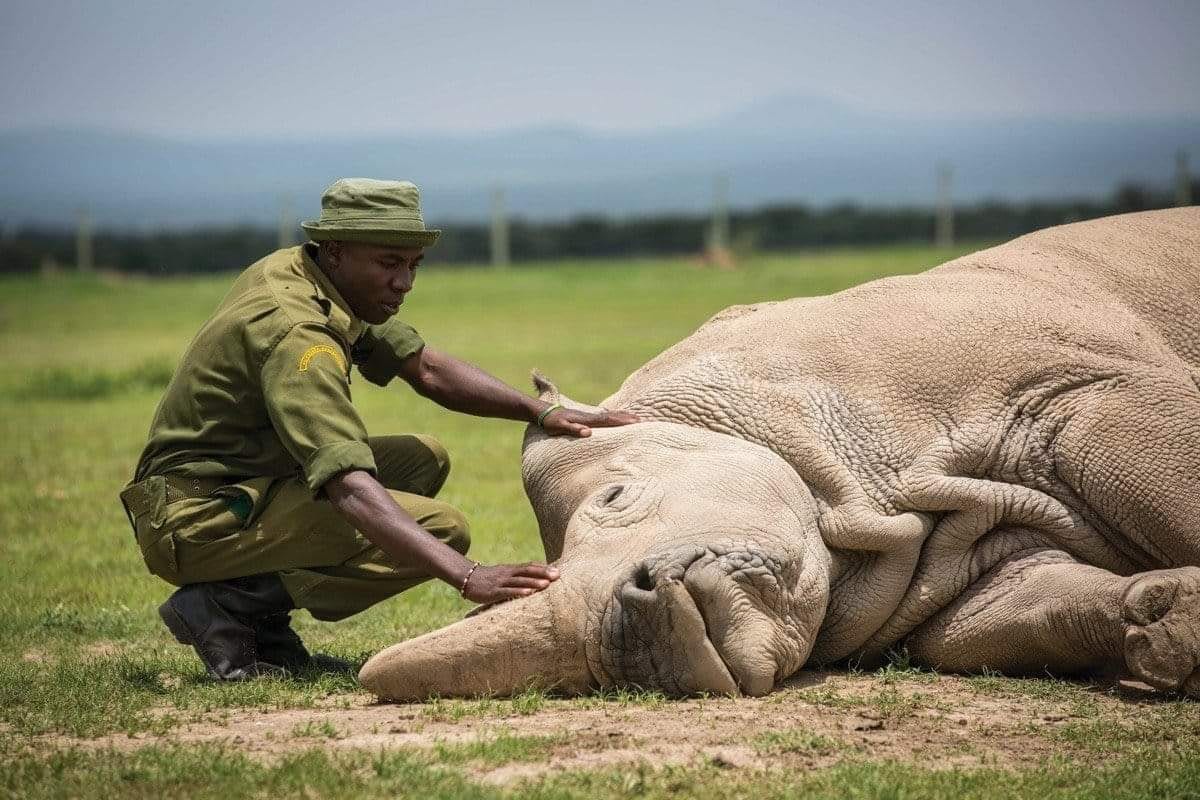 A field ranger with a northern white rhino. Image: Twitter.

Recently on social media, a lot of misinformation has been spreading about the status of the northern white rhino, claiming that the northern white rhino is recently extinct. Paired with a photo of a zookeeper compassionately petting a rhino as he takes his last breath, the public had reason to believe this story was true. While this subspecies of rhinos are functionally extinct, they actually have already been for years — since 2018. But with the help of frozen sperm and harvested embryos, a team of scientists is working on a way to possibly save the subspecies.

Ol Pejeta, the African sanctuary home to the last two female white rhinos, tweeted some clarification in response to the misunderstandings.

Sudan, the last male northern white rhino, died in captivity in March 2018 at the Ol Pejeta Conservatory in Kenya. Sudan was 45 years old and suffered from several age-related health issues and infections. After his death, the species was declared functionally extinct, because while there were still two rhinos remaining, they could not reproduce naturally.

Northern white rhinos, who are the world’s second-largest land animals right after elephants, once roamed the plains of East and Central Africa. Over time, they were severely affected by illegal poaching and habitat loss. In 1995, the International Rhino Foundation stepped in and invested millions of dollars to try and save this subspecies from extinction. They became involved in Garamba National Park in the Democratic Republic of Congo, where the northern white rhinos called home. Even then, the park suffered huge losses when local militia and poachers came through their land, to the point where the International Rhino Foundation had to back out of the park in 2005 due to safety concerns for their staff. In 2008, when they sent in rhino trackers, they were unable to confirm the existence of any rhinos left in the park. Eight captive animals were all that remained of the once abundant subspecies, and most of them were too old to reproduce.

Dr. Thomas Hildebrandt, head of the BioRescue project, explains how they don’t have much time left. BioRescue wants the surrogate mother rhino to live with the two remaining females while the calf is growing up. The lifespan of northern white rhinos is between 30 and 40 years old, and Najin, the eldest of the two, is already 31.

“We need a little baby to learn from Najin and Fatu how to behave as a northern white rhino. So that brings us under quite a lot of time pressure,” Hildebrandt said. “We hope that we can start with the first transplantation attempts at the end of this year.”

So while everything that has been shared online is true, it has already happened. The Northern White Rhino’s plight is a sad one, but with our help, it is possible for them to make a return from the brink of extinction.