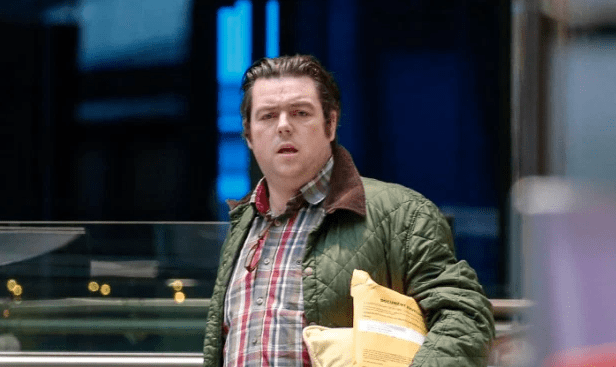 Notorious Rathkeale Rover and rhino horn smuggler John Slattery clutches his belongings as he arrives back in Ireland after a US jail stint.

But there was no sign of the private Gulfstream business jet that was used to extradite him from Ireland to the States on May 23 — at a cost of €200,000 to the American government. Instead, the Limerick man, 31, was placed on an American ­Airlines flight AA 132 from Dallas Airport, in Texas, at 5.00pm on Thursday evening by US Marshals.

Our images show Slattery being greeted by relatives after landing at Dublin Airport at 7.35am yesterday. He was ­identified as a member of the Rathkeale Rovers, a global rhino horn theft and smuggling mob, by investigators working on Operation Oakleaf.

Family members who welcomed his return home included his wife Chantelle, dad Michael, mother Nellie, his children, his brother Patrick and Patrick’s partner, none of whom are involved in crime. Also waiting for him at Dublin Airport was his other brother Michael, 29, who also served a 14-month sentence in the US for the same offence in 2015.

Slattery was deported after three months at the ­Federal Medical Centre in Fort Worth, Texas, which was hit by a coronavirus outbreak earlier this year.

He was held on remand at the prison until he received a one-year sentence at a federal court in Waco, also Texas, on July 22, after he was convicted of “illegally ­trafficking endangered black rhino horns” worth $18,000.

Slattery was convicted under Operation Crash of buying the horns from a taxidermy shop in Austin, Texas, before they were sold in New York for $50,000. But the rhino smuggler was sent back to Ireland this week because the US authorities accepted he had spent nine months on remand at Dublin’s Cloverhill Prison awaiting his extradition.

Due to Covid-19, he was released from Cloverhill Prison for two weeks and returned to Rathkeale, in Limerick, as a High Court judge considered the request.

Once the US ask was accepted, he was arrested by armed gardai and five US investigators at his home in Rathkeale at 2am in the morning of May 23. He was later brought to Dublin Airport and flown to America on the private jet.

The US government forked out to fly to Ireland to extradite Slattery because of the reduction in flights due to the Coronavirus emergency. A source told the Irish Sun: “The Americans are clamping down on this type of criminal activity and were determined to get Slattery before a court.

“They weren’t taking any chances and that’s why they chartered the plane to get him to America.

“The fact the US government paid a lot of cash for a chartered flight shows how serious they were.

“Investigators in America insist that anyone who has been convicted of this crime in their country must spend some time in prison there.”

We also show an exclusive image of Slattery taken on the day he was deported to America by five US investigators. He returned home dressed in a similar checked shirt and also clutching a wad of ­documents from his case.

Also waiting for him at Dublin Airport yesterday were two investigators from the Garda National Immigration Bureau.

At present, anyone who has been deported from another country has to inform gardai of their ­permanent address here. Gardai also took details of those who welcomed Slattery back home. And as he has returned from the US — a country not on the Government’s Green List — he will now have to quarantine for two weeks.

But cops fear Slattery will not self isolate and will celebrate his release from prison. Before his extradition to America, he had posted on social media boasting about his defiance of the Covid-19 restrictions.

Another source said: “He is required to self-isolate because he’s now coming into contact with ­people he hasn’t lived with for a number of months.

“He’s coming from a place where there was a large Covid-19 outbreak. It remains to be seen if he self-isolates.”

The Irish Sun can also reveal how at present other members of the infamous rhino theft gang are now operating in the UK, Spain, France, Germany, Poland, Sweden and the Czech Republic. They have been selling tools, ­tarmacking driveways and washing cars. They left Ireland once the lockdown was lifted. But gardai also fear they have travelled to other countries to engage in building scams.

On ­previous occasions, they have fleeced vulnerable pensioners for work on their homes. Although Slattery is now a free man, his associates remain targets for the Garda National Bureau of Criminal Investigation and the Criminal Assets Bureau.

Gardai are probing members of the Rathkeale Rovers for allegedly targeting millionaires in a €200,000 bogus vintage car scam. Buyers were told they would be receiving top-of-the-range motors advertised online. But when they asked for the vehicles they were told they were “missing”, while ­others were described as being in poor condition.

Another source added: “This investigation is ongoing and files have been sent to the Director of Public Prosecutions here.

“It’s just the latest in scams the gang are committing all over the world. Every law enforcement agency knows who they are.”

Slattery is the last remaining rhino trafficking suspect wanted by US authorities. He had been initially identified as a suspect in 2010 but later fled, moved to France and changed his name to John Flynn. He was tracked down by investigators and arrested in Paris. But he later received bail and returned home, staying here until his arrest in May. His brother Michael, 29, served a 14-month sentence for his role in the scam.

Lord Constantine said: “I have found him to be a trustworthy and courteous young man.

“I was extremely surprised to learn that he had been arrested and can only think his actions were taken out of stupidity and are totally out of character.” lso caged for the same offence was Patrick ‘Crying Dan’ Sheridan.

He was jailed in Waco for a year in 2016 after violating local wildlife trafficking laws by buying four black rhino horns before selling them in New York. Court documents show Sheridan contacted a taxidermy business in Austin, Texas on September 21, 2010 to “inquire about purchasing” a black rhinoceros shoulder mount. But when the hood was told only a Texas resident could purchase the item, he “hired” a homeless man to buy the items.

Cops believe the man was paid €875 to complete the sale and sign for the Endangered Species Bill of Sale certificate. Sheridan bought four horns for €18,000 before transporting them to New York. Once there, a Chinese buyer bought the items for €50,000.