By NewsroomSeptember 26, 2019Conservation, Education
No Comments

PORT ELIZABETH: As proud South Africans celebrated Heritage Day on the 24 September, it is significant that World Rhino Day also falls on the same long weekend. We come together to honour one of our Big Five, the iconic yet endangered rhino.

World Rhino Day is a day to celebrate our rhino, and as a society of responsible citizens, to reflect on their diminishing numbers and the possible solutions to halting this decline and indeed, re-establishing the population.

South African based non-profit organisation, One Land Love It, commonly known by the acronym OLLI, set about creating awareness this World Rhino Day. 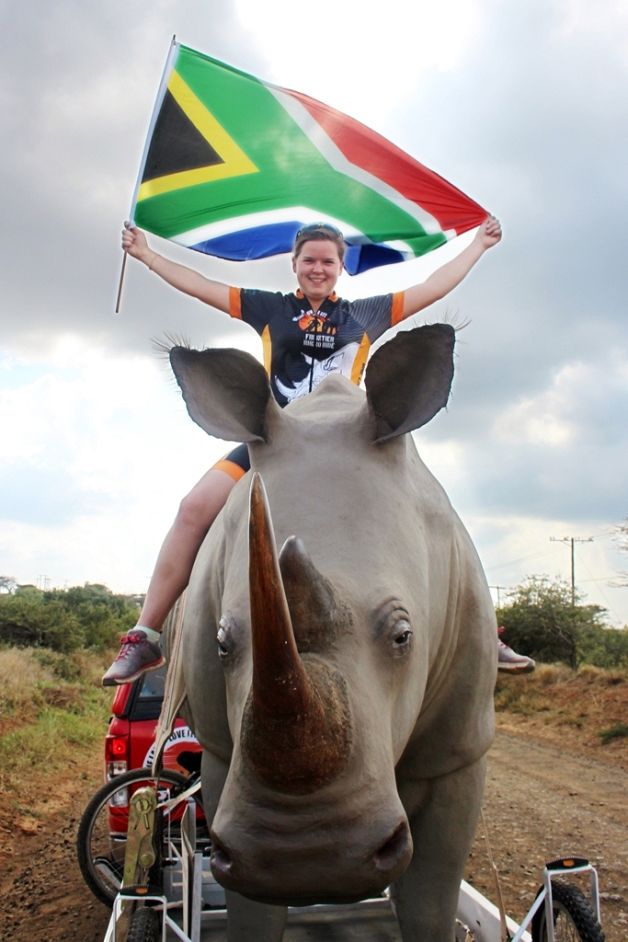 Original photo as published by R News: As proud South Africans celebrated Heritage Day on the 24 September, it is significant that World Rhino Day also falls on the same long weekend. We come together to honour one of our Big Five, the iconic yet endangered rhino.

“We wanted to give people across the globe the opportunity to do something physically to contribute to the rhino poaching solution – this by means of a collective demonstration of pro-rhino sentiment, a petition in movement if you like,” explained Wayne Bolton, founder of the organisation.

“By means of this initiative aptly named OLLIMove, people were urged to perform any physical activity including running walking, cycling, dancing, literally any activity that embodied the message of “moving from caring to doing”.

Participants logged their activity on the OLLI organisation’s website, or alternatively on the free mobile app, Strava, under the OLLI Move Club.

“Our inaugural event was a success,” said Bolton, “we saw participation of people representing 22 countries across the globe, and a variety of “moves” from across South Africa. As people came to understand the concept, they demonstrated real interest in being involved.

Local initiatives on the day included: a “move” from the V&A Waterfront in Cape Town up Table Mountain’s Devil’s Peak (SANParks) led by local actor Ashley Dowds, a 24 hour beach hike in KwaZulu-Natal led by adventurer Grant Melville (in collaboration with the KZN SANParks Honorary Rangers) and a hike in the Zuurberg Mountains in SANParks’ Addo Elephant National Park.

In Port Elizabeth Collegiate Girls’ Junior School engaged their pupils in making their Inter-House Road Running event an OLLI Move, as did Woodridge U15A Cricket team at the Grey Cricket Festival. Besides many independent “moves”, a group of enthusiastic bike riders and runners braved the poor weather to “move” along the Port Elizabeth beachfront to the distinctive Cape Recife Lighthouse.

“It is the intention of One Land Love It to make this an annual event. As support grows around the world, more awareness will be created. In a democratic society awareness is essential as it presents opportunities for ordinary people to make their voices heard to influence policy makers to act in the interest of our environment,” said Bolton.

In the first 6 months of 2019, 318 rhino were killed for their horns. This is less when compared to the 386 killed over the same period in 2018. Environment, Forestry and Fisheries Minister, Barbara Creecy, said that: “Not only is rhino poaching once again showing a decline, but our successes in the courts are also noteworthy.”

This sounds like good news but in light of the recently postponed closing of Skukuza’s “poaching” Court, a symbol of justice for our rhinos with a 99.8% conviction rate, we realise that we cannot lose momentum. We need to continue to apply pressure on policy makers and to speak for those who cannot speak.

Minister Creecy acknowledged that the battle to end poaching is far from over but that collaborative efforts are paying dividends.

“South Africa has for years been at the forefront of the fight against rhino poaching and illegal wildlife trade. The cooperation between enforcement agencies and government departments, the collaboration with private rhino owners, NGOs and other stakeholders can be seen as the most important reason for the continuing decrease in rhino poaching in South Africa.”

The OLLI foundation not only focuses on saving our rhino, but argues that if society cannot find solutions to the rhino crisis, it stands little chance of resolving other environmental issues. As stewards of our natural heritage we need to be informed and invested. Extinction cannot be our legacy.

“We do not want to say we stood by and watched as the rhino became extinct in our lifetime – we urgently need to move from caring to doing!” OLLI