One man charged in biggest ever rhino horn smuggling case 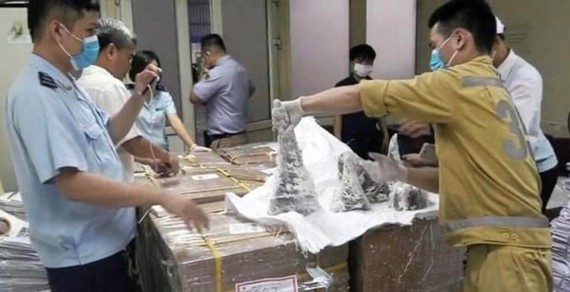 The People’s Procuracy of Hanoi on September 6 approved a decision to prosecute a man in connection with the largest ever rhino horn smuggling ring in Vietnam, with a total volume of up to 126.5 kg.

Do Minh Toan, born 1985 and residing in the northern province of Ha Nam, is charged with violating regulations on endangered, precious, and rare wildlife protection, under Point d, Clause 3, Article 244 of the 2015 Penal Code.

According to initial investigation results, on July 25, 2019, the Hanoi police, in coordination with the Customs section at Noi Bai International Airport and other relevant agencies, found 126.5 kg of goods suspected to be rhino horn in two consignments on a flight from Dubai to Vietnam.

The goods was then affirmed to be rhino horns, comprising 55 rhino horn pieces that were covered with a layer of plaster.

On January 22, 2020, the Hanoi police issued a decision to start a legal case of “violating regulations on endangered, precious, and rare wildlife protection”. This is a serious case with a large volume of rhino horn that was illegally transported from abroad to Vietnam.

Investigation into case is still underway to find other involved smugglers.