By NewsroomNovember 2, 2021Anti-poaching, Science and technology
No Comments 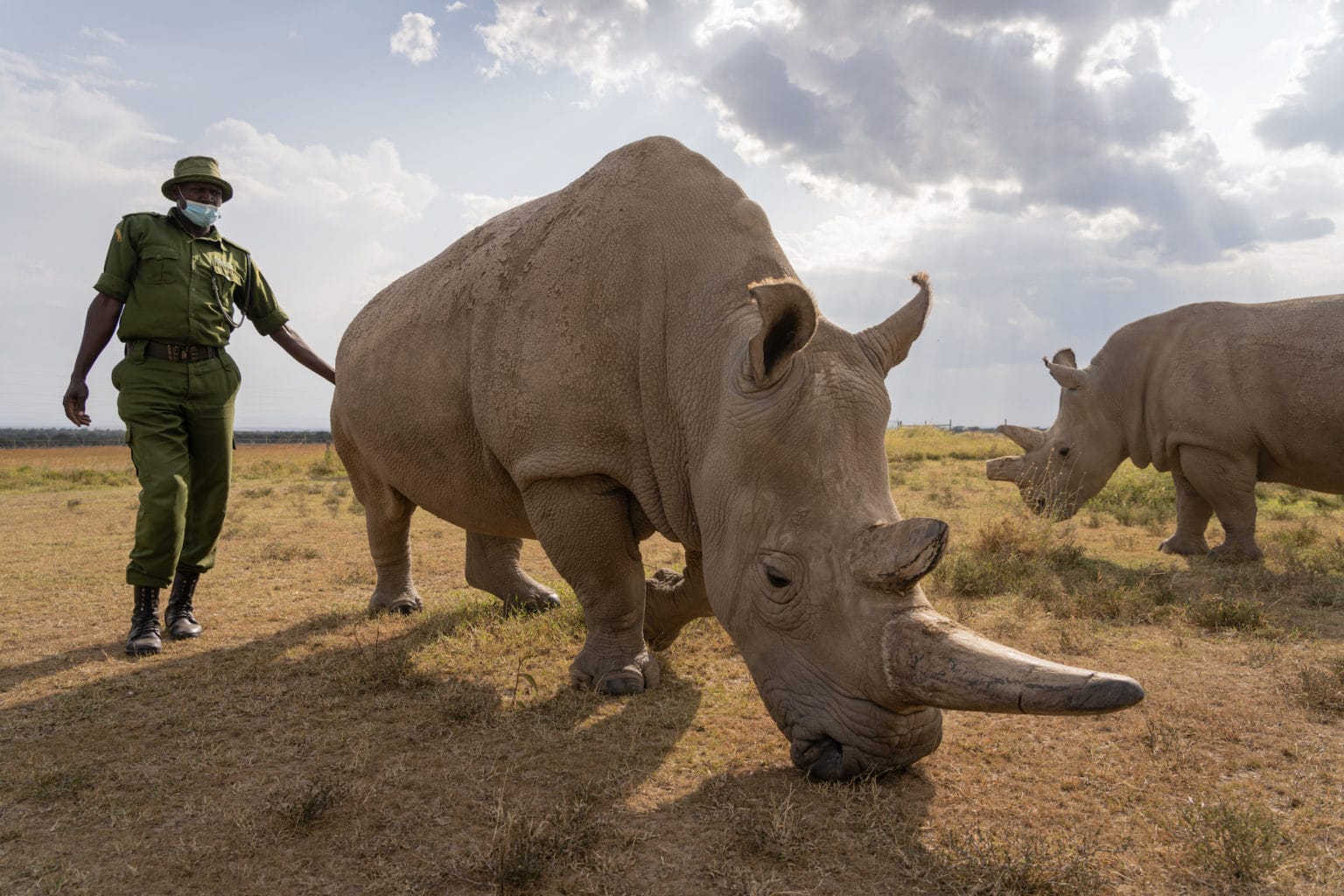 Najin with one of her handlers at the Ol Pejeta Conservancy in Kenya. Image: BioRescue/Jan Zwilling.

Scientists striving to save the northern white rhino from extinction have announced their decision to retire one of the world’s last two individuals from their assisted breeding program.

The BioRescue consortium resolved to stop harvesting eggs from 32-year-old Najin following an in-depth ethical risk assessment that took many factors into consideration, including her age, reproductive health and overall welfare.

“It was a difficult decision, very difficult, because we had to evaluate the conservation of the species against the welfare and life of the individual animal involved,” Barbara de Mori, director of the Ethics Laboratory for Veterinary Medicine, Conservation and Animal Welfare at the University of Padua in Italy, told Mongabay. “It was the right decision for Najin.”

Najin and her daughter, Fatu, both live in Ol Pejeta Conservancy in Kenya and are the only two remaining northern white rhinos (Ceratotherium simum cottoni) in the world. In 2014, it became clear that the subspecies could not survive through natural breeding — neither Najin nor Fatu can carry a calf to term. In 2018, the situation became more pressing with the death of the last male, 45-year-old Sudan, Najin’s father.

The BioRescue consortium comprises Leibniz Institute for Zoo and Wildlife Research (Leibniz-IZW) in Germany, Safari Park Dvůr Králové in the Czech Republic (where Najin and Fatu were born), the Kenya Wildlife Service, and Ol Pejeta Conservancy. They have a bold strategy to generate offspring using assisted breeding techniques.

These procedures depend on harvesting oocytes, or egg cells, from female rhinos and fertilizing them with stored sperm from several deceased males to create embryos. While oocyte collection is a relatively straightforward process for humans, it carries considerable risks for rhinos, in part due to the hazards of placing such a large animal under anesthesia.

The dilemma is that the rhinos either go through the procedure, or the entire subspecies is lost.

However, evidence gathered over time indicated that Najin’s health and welfare needed special consideration. Collections so far had only yielded a few oocytes from her, none of which had been fertilized successfully. Furthermore, ultrasound scans revealed several small benign tumors on her cervix and uterus, and a cyst in her left ovary.

De Mori’s lab group at the University of Padua is responsible for conducting intensive ethical assessments for each procedure involving Najin and Fatu. Their decision on Najin’s future role in the breeding program followed discussions with project stakeholders and rigorous analysis of all ethical dimensions, from species conservation to individual animal welfare.

Najin’s retirement from the breeding program leaves Fatu as the sole supplier of oocytes. Scientists have so far been able to create 12 embryos using Fatu’s oocytes and sperm from several deceased males. Next, they plan to implant them into surrogate mothers from a Kenyan population of southern white rhinos (Ceratotherium simum simum).

BioRescue said Najin will remain an important part of the battle to save northern white rhinos by providing tissue samples for future stem cell approaches to reproduction that are currently in development in collaboration with San Diego Zoo. Experts say stem cell approaches would be a breakthrough due to their potential to enhance the future gene pool, but so far the method has only produced viable embryos and offspring in lab mice.

Najin will fulfill another crucial role in transferring her social knowledge to any future offspring, according to BioRescue. While southern white rhinos, which will act as surrogates to future offspring, are closely related to northern white rhinos, they evolved in significantly different habitat. Therefore, both Najin and Fatu’s social and cultural knowledge will assist future generations to adapt to their natural habitat.

De Mori said that for this to happen, the team must carefully select surrogate mothers that are compatible with Najin and Fatu. “We are working with Kenya Wildlife Service to identify the right recipient mother that will be able to share the same environment with Najin and Fatu to let this transference of social knowledge and competence be effective,” she said.

De Mori said looking into the eyes of Najin and Fatu at Ol Pejeta Conservancy stirs a cacophony of emotions, not least the sense of guilt that it was human actions — mainly poaching and habitat loss — that drove their subspecies to this dire existential precipice. “You feel all the responsibility you have, and realize what it means to work to do our best against the extinction of this species,” she said.