Only 3 rhino poaching reported in Kaziranga National Park during 2019 (State of Assam, India)

By NewsroomJanuary 7, 2020Anti-poaching
No Comments

In Assam, only 3 rhino poaching has been reported in the Kaziranga national park last year which is lowest in the last 10 years.

The Director of the Park P. Sivakumar said that two rhinos were killed under Golaghat district and one at Biswanath district.

He said that no rhino poaching has been reported in Nagaon, Sonitpur and Karbi Anglong districts. 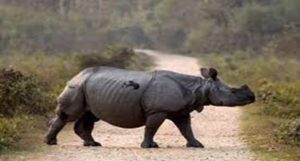 The Director said credit goes to Assam Chief Minister as he ensured best coordination among different agencies as well as reviewed progress time to time.

Apart from that, team work and change in mindset among poachers are the other reasons in preventing poaching.

AIR Correspondent reports that as per 2018 estimation, there are 2413 rhinos in the Kaziranga National Park.