By NewsroomMarch 2, 2021Global conservation
No Comments 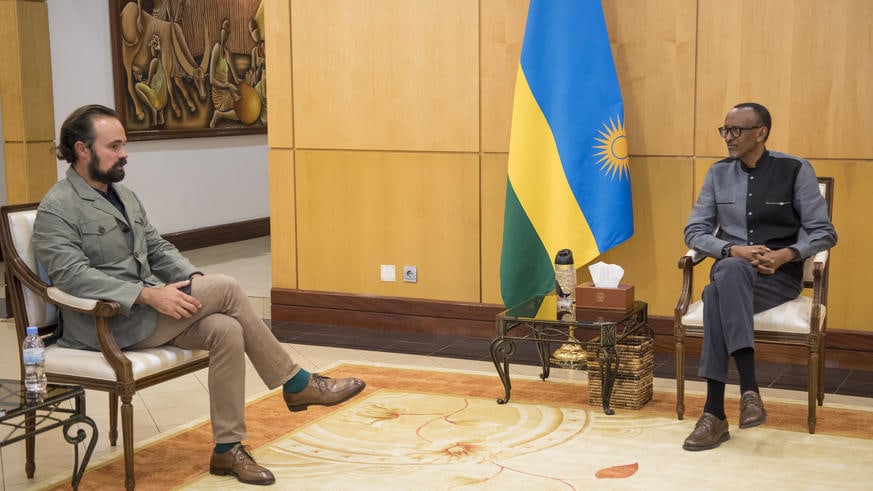 President Paul Kagame signs on with Space for Giants. Image as originally published by The New Times.

There is renewed optimism for Rwanda’s wildlife conservation after Paul Kagame became the sixth African Head of State to join the Giants Club and sign the forum’s declaration, according to a statement by Rwanda Development Board (RDB).

The Club is an initiative of Space for Giants, an international conservation organisation that ‘connects leaders of African states accommodating significant large mammal populations to financiers, conservationists, scientists, and well-known supporters’.

It links governments to renewed investment in conservation that boosts sustainable businesses and creates jobs while protecting the environment.

The collaboration comes at the time when Rwanda is increasing its focus on restoring a network of national parks, including Akagera, which hosts the ‘Big Five’ mammals namely elephants, lions, leopards, buffalo, and rhino.

According to RDB, the focus is on using revenues from tourism to fund national development.

Dr Max Graham, Founder and CEO of Space for Giants, said that Rwanda’s wildlife conservation spirit runs through all the Giants Club countries.

The Giants Club countries are home to more than half of Africa’s 415,000 remaining elephants.

Botswana hosts herds up to 150,000 elephants mostly centred on the Okavango Delta in its north.

Gabon has more than half of the continent’s remaining forest elephants, as well as lowland gorillas.

“Rwanda under President Kagame’s leadership has become a beacon for how a country can build conservation into a national economic sector to benefit all,” Graham said.

That resonates very strongly with the Giants Club, which promotes best practice in getting things done in conservation that delivers those wide rewards from protecting natural landscapes and their species, he underscored. “We are incredibly proud and excited that President Kagame has joined the Giants Club.”

Lord Lebedev, the patron of Space for Giants and of the Giants Club said: “It is increasingly becoming clear that the health of the natural world is not separate from the health of humanity. President Kagame has led the way in committing Rwanda to a path of sustainable development. I am proud to work with such a visionary leader on this vital cause.”

Other commitments include promoting domestic and international investment in responsible conservation and tourism enterprises so as to create new revenue from wildlife for the benefit of Rwandans, combat the illegal wildlife trade in Rwanda and its neighbours as well as  reducing  the problem of human-wildlife conflict

Rwanda’s growing populations of endangered mountain gorillas have made the country world-famous, both for protecting the species but also for using the proceeds of gorilla tourism for wider national social benefit.

The Giants Club Declaration describes the support that the Club will offer its Presidents as they commit their governments to significant international conservation measures.

Some of the Giants Club projects underway include strengthening judicial systems in Uganda and Kenya to enhance wildlife crime investigations, prosecutions, and convictions.

They also include constructing electrified fences to keep elephants away from farmers’ fields and reduce human-elephant conflict in Gabon, Kenya, and Uganda and also launching international conservation investment mechanisms to bring new finance to protected area networks, in Uganda and Gabon.