Orphaned rhinos stronger by the day 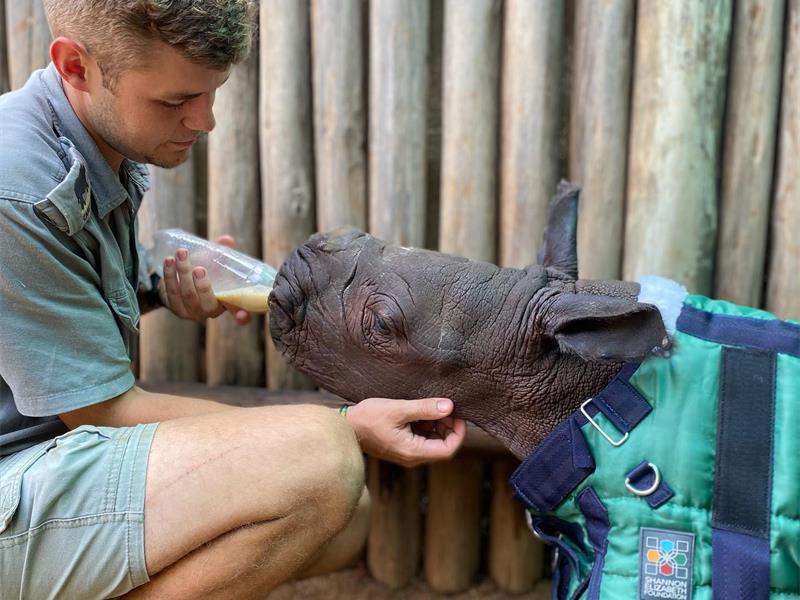 Daisy is being fed by her handler, sporting her Shannon Elizabeth Foundation jacket. Image: Care for Wild’s Facebook page

The orphaned rhinos at the Care for Wild Rhino Sanctuary are thriving and making new friends after several had recently been admitted to the sanctuary’s ICU for emergency care.

According to Care for Wild’s Facebook page, little Aquazi, who had been admitted to the ICU on December 1 at just four weeks, is moving from strength to strength, being deemed by the staff as “stubborn, strong-willed, cheeky and very playful”.

“After a week of intensive care and treatment for life-threatening pneumonia, Aquazi began to get stronger. He was introduced to another ICU patient, a zebra foal called Modjadji,” said the Facebook post.

The foal officially graduated from the ICU on December 20 by moving down to the bigger bomas.

Care for Wild said Modjadji remains in ICU and has a very special friend waiting for him at the bomas.

Meanwhile, the orphaned rhino Daisy, who was rescued on December 11 when she was just 12 hours old, has also reportedly been doing well.

“Little Daisy has a spring in her step. It might be cold and wet, but that’s not stopping our littlest calf,” said Care for Wild in another Facebook post.

“This terrible weather can be very dangerous for her, which is why she has her jacket and blanket on, as it is so important that she gets out to exercise. We are so pleased to see this energy!”