By NewsroomApril 5, 2021Wildlife Trade
No Comments 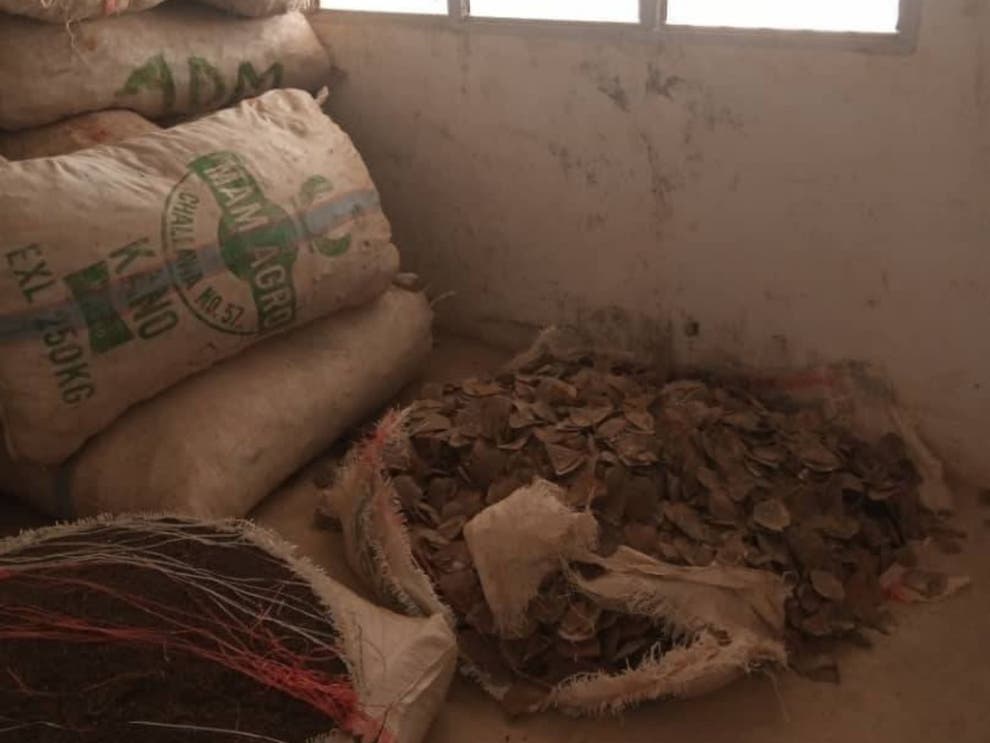 Pangolin scales are disguised as food for cross-border trafficking. Image: As originally published by The Independent.

Four thousand kilograms of pangolin scales were seized by authorities in Cameroon on what experts are calling a “major trafficking route”.

Customs officials seized the shipment, which was disguised as foodstuff in plastic bags, on 26 March at a northern outpost close to the border with Nigeria. The goods have a market value of around £5m.

The pangolin is believed to be the most trafficked animal in the world. It has been poached to near-extinction in Asia and there is increasing pressure on remaining populations in Africa due to demand for its scales and meat.

The animal is one of the potential intermediary hosts for Sars-Cov-2, the virus that causes Covid-19, according to a report from the World Health Organisation.

In April 2020, Malaysian customs seized a shipment of 6 tonnes of pangolin scales hidden within sacks of peanuts from Nigeria, destined for Vietnam.

The Eagle Network (Eco Activists for Governance and Law Enforcement), an organisation that combats wildlife crime, assisted Cameroonian customs with the seizure. A spokesman said: “Nobody was arrested in connection with the seizure and people associated with the shipment ‘escaped’ possibly due to corruption”.

The Independent is working with conservation charities including Space for Giants and Freeland to protect wildlife at risk due to the conservation funding crisis caused by Covid-19 and to prevent the emergence of another zoonotic pandemic.

Chris Hamley, Senior Pangolin Campaigner at the Environmental Investigations Agency (EIA), said that the seizure was on a “major trafficking route” from the Democratic Republic of Congo and the Central African Republic, where many pangolins are poached, up through Congo-Brazzaville and Cameroon.

The final destination is Nigeria, which has a 1600km border with Cameroon. Nigerian ports are responsible for the export of around 70 per cent of pangolins poached from Africa, according to the African Pangolin Working Group.

A 2018 report from Cameroon’s anti-corruption commission ranked its customs agency as the country’s most corrupt body. Between 2010 and 2015 the state lost £790m in revenue from customs, or 8 per cent of its national budget.

Mr Hamley said: “Massive quantities of pangolin scales are being illegally harvested from Central Africa’s forests to be exported by criminal networks that use Nigeria as a wildlife trafficking safe-haven. This seizure shows that these criminal networks are exploiting the porous and largely unregulated northern border zone between Cameroon and Nigeria.”

The founder of The Independent’s charity partner Freeland, Steve Galster, said: “This massive seizure of a highly endangered species is a dangerous indicator that wildlife traffickers are waiting out the COVID-19 scare and are prepared to test the Chinese government’s policy and resolve to keep wildlife markets closed.“

Mr Hamley added: “It is essential that the Nigerian and Cameroonian authorities do more to effectively investigate and prosecute the high levels of these pangolin trafficking groups and root out the corruption that is facilitating their activities.”