Pangolins don’t need teeth, but someone does if these inoffensive mammals are to survive.

By Peter BorchertFebruary 17, 2021Editorial
No Comments 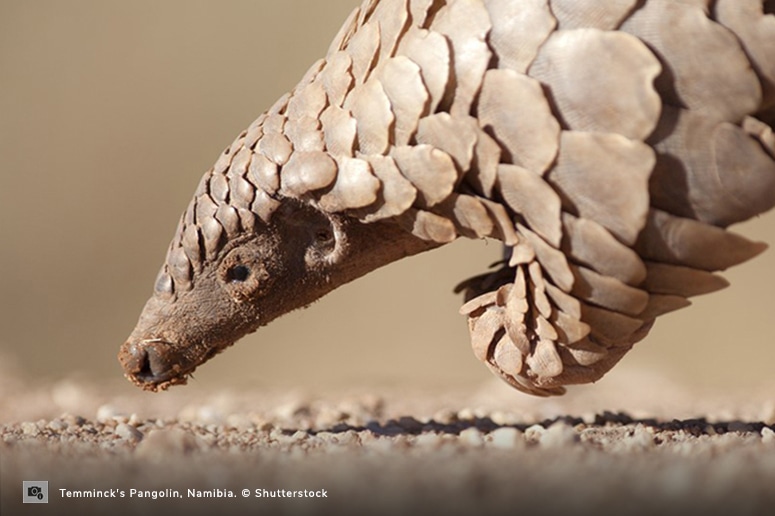 “Take your average hedgehog, expand it to the size of a beach ball, then plate it in armored scales, give it a long, sticky tongue and a thick tail, and you’ve got yourself a pangolin (well, more or less). Dr. Seuss himself would have had a hard time dreaming up this creature. But the weird and wonderful pangolin isn’t a storybook creation. It’s a real-life animal, and it’s the most-trafficked mammal in the world.”

Back in mid-2014, I felt drained by the daily horror of rhinos being massacred for their horns. More than 3 were being cruelly killed by poachers every day, but not drained enough to miss another atrocity waiting in my daily newsfeed. “Pangolin scales worth HK$17m found hidden in shipments from Africa,” screamed the headline in Hong Kong’s South China Morning Post. More than three tonnes of pangolin scales had been discovered. It was the biggest haul in five years.

I knew that pangolins were being hammered by illegal trade, but I was guilty of assuming it was far more of an Asian problem than an African issue. I was utterly wrong, of course. And the enormity of the situation really struck home as I read that this African consignment of contraband pangolin scales was estimated to have come from as many as 8,000 animals. Just like that, 8,000 living, inoffensive creatures had been illegally removed from the wild and killed for money.

Haul after haul of scales and live and frozen pangolins continued to be intercepted somewhere along the way from source to market. As the Asian populations of pangolins were progressively pummeled towards extinction, poachers began increasingly to focus on Africa. More and more of the crimes were originating here.

Then, in 2016, came the welcome news that all eight pangolin species—four African and four Asian—had been placed on CITES’ Appendix I. CITES is the acronym for the United Nation’s Convention on International Trade in Endangered Species of Wild Fauna and Flora. The treaty aims to ensure that international trade in specimens of wild animals and plants does not threaten the survival of the species in the wild. Appendix I is the most stringent category: no species on this list may be traded in any shape or form, alive or dead, except in the most exceptional circumstances.

One would have hoped that this decision by the 183 members of CITES would have at least slowed the wanton, worldwide overexploitation of pangolins. Sadly not.

In January 2019, Hong Kong customs officers confiscated 8.3 tons of scales from more than 14,000 pangolins. About 1,000 elephant tusks were also discovered; the scales and ivory lay hidden under slabs of frozen meat on a cargo ship headed towards Vietnam. Once again, Nigeria was fingered as the point of departure.

Then, in February, just days before World Pangolin Day came the largest single pangolin bust on record. Nearly 33 tons of pangolin products, including 1,800 boxes of frozen pangolins, an additional 572 pangolins frozen separately, 61 live pangolins, and 361 kilograms of pangolin scales were intercepted in Borneo.

A further two consignments of more than 13 tons each were uncovered in Singapore in April 2019. Some 36,000 pangolins had been killed for this consignment alone. And again, they were in transit to Vietnam from Nigeria. The carnage continued unabated throughout the year, and National Geographic reported that seizures of contraband pangolin scales and meat had reached an all-time high. In 2019, more than 128 tons were intercepted worldwide—an increase of more than 200 percent from five years earlier.

Dan Challender, co-chair of the Pangolin Specialist Group for the International Union for Conservation of Nature (IUCN), confirmed that pangolins were flowing out of Africa to China at “industrial levels.” AWF sets the figure at 2.7 million. The statistics are so appallingly high and get thrown at us so often that we (well, I know I do) find the horror of it all difficult to grasp. The numbers are quite literally mind-numbing. They anesthetize us to the brutality, pain, and suffering that each of these defenseless little animals has endured. The dead ones are the lucky ones as their suffering has mercifully ended before being shipped to a faraway place. But some are less fortunate and transported live in crushingly tight crates.

Dealing with confiscated pangolins is indeed a grisly affair in its own right. Mission Blue director Sharon Kwok witnessed such an event in Sumatra first hand:  “The storage facility was an existing seafood warehouse…Passing into the building, I was immediately assaulted by the lingering smell of seafood, freezer, unwashed bodies, cigarettes, and an unfamiliar stench that proved to be pangolin. Pangolin excrement and death. There was a massive freezer and a smaller one that stored frozen pangolins and their parts, a storeroom with their scales in bags, and the largest room held roughly fifty colorful plastic poultry crates – the festive childish colors completely at odds with the gruesome business at hand.”

The dead pangolins and the scales of countless more were then burned in an open pit. But a few were alive, and these were returned to the forest. Kowk poignantly describes the final few moments of their release: “The last pangolins I set free were the mother and baby I looked after. I carried them into bushes and lay them down gently. She was curled up tightly but he managed to squirm into the hollow of her belly, and that was the last I saw of them. An image I will never forget.”

Nor should any of us ever forget. No species can withstand exploitation of this magnitude.

In 2020 Pangolins suddenly took center stage in a very different way. The Covid-19 pandemic took hold, and it seemed that the virus might have jumped the species divide due to a Chinese predilection for the scaly mammal’s flesh. Bats were similarly suggested as a pathway for the disease, as were snakes and bamboo rats, amongst others. There has been no conclusion or closure on the matter. Still, some evidence suggests that while the findings don’t confirm whether the pangolin virus was a part of SARS-CoV-2’s evolution to humans, it does support possible scenarios for how this could happen. Maybe one day we will know for sure.

However, the coronavirus did prompt the Chinese government to fast-track a ban on wildlife meat consumption. In June last year, it also officially removed pangolin scales from a list of approved ingredients in traditional medicine. Technically the consumption ban is still in place. But it is the decision on the medicinal side that is the key, a key that could finally lock the door on this totally unsustainable illegal trade in pangolins.

Could CITES play a part in the pangolin’s revival? I think it could, but only if it was given real legal power to act as an enforcer of its rules and regulations. But there is no sign of this happening now, in the near future, or ever.

The treaty wasn’t constructed to be a police force in the way it would need to be, and this is unlikely to change. There is no international court to which a party state has a right to file a complaint or grievance against a private individual or another party state for a violation of the provisions or obligations of CITES. Peer pressure and trade sanctions could have some effect on the less powerful nations involved. But going this way against mighty China? I don’t see it happening.

China is the key, and if it were to stand and bare its formidable fangs with real intent on behalf of the pangolin that has none, the scenario would change immediately.

Might that happen? Your guess is as good as mine.

P.S. In January this year, a total of 8.8 tonnes of elephant tusks, pangolin scales, and bones from endangered species were discovered in a container awaiting shipment from Lagos to Vietnam (and no doubt from there on to China). The 162 sacks of pangolin scales and 57 sacks of ivory plus the bones of other species had been mixed in with timber and falsely declared as furniture materials.